(Minghui.org) Around 1650 BC, a prosperous city was instantly destroyed. What was the cause? Now scientists think they have found the answer and may be able to confirm the biblical story of Sodom’s destruction.

Published in Nature Scientific Reports on September 20, 2021, a paper presents evidence that the ancient city of Tall el-Hammam in the Jordan Valley was destroyed by a Cosmic Airburst more than 3,600 years ago. The paper was titled “A Tunguska sized airburst destroyed Tall el-Hammam a Middle Bronze Age city in the Jordan Valley near the Dead Sea.” The twenty-one co-authors included archaeologists, geologists, geochemists, geomorphologists, mineralogists, paleobotanists, sedimentologists, experts on cosmic influences, and medical doctors.

“We consider whether oral traditions about the destruction of this urban city by a cosmic object might be the source of the written version of Sodom in Genesis,” wrote the paper, “We also consider whether the details recounted in Genesis are a reasonable match for the known details of a cosmic impact event.”

Archaeological excavations have been underway at Tall el-Hammam since 2005. After hundreds of people’s painstaking excavation for nearly fifteen years, the material collected was analyzed in detail by more than 20 scientists from ten U.S. states, Canada, Czech, and others. 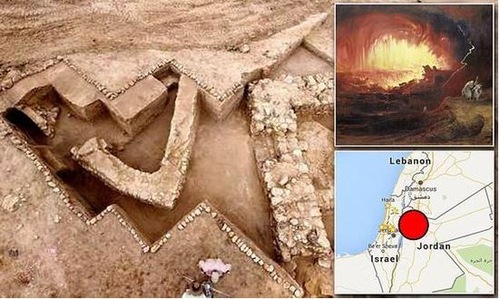 A paper published in Nature Scientific Reports on September 20, 2021, shows evidence that the ancient city of Tall el-Hammam in the Jordan Valley was destroyed by a cosmic airburst more than 3,600 years ago.

The above-mentioned journal article painted the following picture of a catastrophe.

After simulations, scientists believe that rocks from the universe, about 60 to 75 meters in diameter, exploded into a giant fireball at a distance of 1 to 5 kilometers from the surface. The temperature at the center of the explosion exceeded 300,000 degrees Celsius, much higher than the 5,000 degrees Celsius temperature on the surface of the sun.

Thermal radiation spreads at the speed of light, rapidly melting ceramics, clay and gypsum. The temperature of the earth’s surface in the region of Sodom also briefly rose to above 1,850 degrees Celsius. At the same time, the rock explosion produced a huge shock wave, and the resulting gust of wind swept across the entire city at a speed of 900 to 1,200 kilometers per hour, and all buildings were destroyed wherever it went. Its blasting power is 1,000 times that of the Hiroshima atomic bomb.

These indications suggest that the destruction of the city was related to extremely high temperatures. Archaeologists believe that after excluding war, fire, volcanoes, lightning, and man-made factors insufficient to produce such destructive power, the existence of this phenomenon can only come from a cosmic airburst.

This hypothesis is also supported by the presence of “shocked quartz” grains excavated from the site. Such quartz was formed at high pressure and temperature from the impact. It has one or more sets of cracks within the quartz that are aligned with the quartz crystal axis, and differs significantly from natural stone crystals.

Scientists also found that after the disaster, Tall el-Hammam City and its surrounding areas were abandoned for 300 to 600 years. The regional population dropped from 45,000 to 60,000 to just a few hundred nomads. Scientists speculate that the explosion may have caused the salt water of the Dead Sea near Tall el-Hammam to evaporate or splash into the entire valley, rendering crops unable to grow, and those who survived had to abandon it. The high concentration of salt found on the site confirms this statement.

Scientists say this catastrophe was more like a civilization-ending disaster. Because of the location of the city of Tall el-Hammam, its time frame, and the way it was destroyed, some scholars believe that the city is the Biblical city of Sodom.

Steven Collins, chief archaeologist for the Tall el-Hammam City excavation project, supports the notion that Tall el-Hammam is Sodom, which he thinks is backed up by undoubted evidence. He said that the geography, the sheer size of the city, and the age of it – everything matches what is described in the Bible perfectly.

Collins notes that the ancient city of Tall el-Hammam dates from 3500 to 1540 B.C. and was abruptly abandoned. The city of Sodom, mentioned in the Bible as the largest city on the east bank of the Jordan River, was located on a major trade route and had high, thick walls. The ancient city excavated by the archaeological team is believed to be the largest in the region, with walls 10 meters high and 5.2 meters thick, all of which match the biblical reference to Sodom.

Moreover, research conducted by a group of scientists led by Dr. Phil Silva provides evidence that there was indeed an airburst event that destroyed the city. This event is apparently consistent with the narrative of an aerial ball of fire falling on Sodom and Gomorrah as described in Genesis 19.

Hershel Shanks, editor of Biblical Archaeology Review, agrees that Tall el-Hammam is Sodom, but argues that the significance behind the authors’ reference to God's destruction of the city is the key point, regardless of whether the theological question can ultimately be proven by science.

Other scholars say that the in-depth study of this disaster is a warning to humanity today. The above-mentioned journal article states, “Tunguska-scale airbursts can devastate entire cities/regions and thus, pose a severe modern-day hazard.”

“Justice May Be Late, But Never Absent”