(Minghui.org) Today's news from China includes incidents of persecution that took place in 10 cities or counties in 5 provinces, where at least 15 practitioners were recently persecuted for their belief. 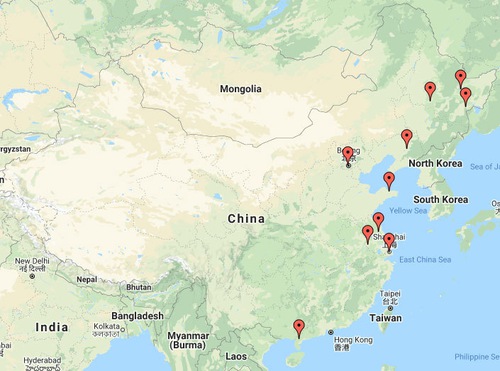 Ms. Zhang Xiuying from Huairen County went missing over a year ago. She is being held in the No. 4 Team, No. 4 Ward, Dabei Prison. She can meet visitors the second Wednesday of every month.

Ms. Luo Ling was arrested, taken to the brainwashing center, taken to a forced labor camp, and sentenced to prison by the Chinese Communist Party (CCP) simply because she practiced Falun Dafa. The police ransacked her home, followed her, and placed her under surveillance.

Mr. Wang Zhuang, in his 60s, from Jiamusi City, Heilongjiang Province, worked in Dalian City Liaoning Province. He was arrested in Jiamusi City by officers from the Dalian City Domestic Security Division and taken to the Xinzhaizi Police Station on June 28, 2016. He was later transferred to the Dalian Brainwashing Center, where he was deprived of sleep, and officials beat him whenever they felt like it.

Mr. Wang was sentenced to five years in prison, and held in the Kangjiashan Prison. In prison, he was beaten by inmates, pressured to transform, and deprived of sleep. Zhang Qingzhong, head of the prison ward, instructed four inmates to take turns to watch and transform him. Every day he had to endure abuse.

Ms. Fu Guixian was sentenced to three years in prison.

Ms. Hong Youfeng from Funing County was missing for more than two weeks and is now held in the Yancheng Detention Center.

Ms. Yuan Ximei from Zhangxing Town, Zhaoyuan City, was arrested and her home was ransacked on September 8, 2021. She was released the following day. She was forced to sign paperwork for release on bail. A few days later, she was taken away for interrogation.

Ms. Yao Juying, a teacher from the Jiutingyuan area in Jiuting Town, Songjiang District, was monitored during the long holiday starting on October 1, 2021. Those assigned to monitor her were equipped with a small truck with the license plate number Shanghai-B.QY805, which was parked in the driveway in front of Ms. Yao’s home around the clock. When Ms. Yao went out grocery shopping, someone would immediately follow her to the market. They followed her everywhere until she returned home. This has been the norm in recent years, and these people would stake out in front of her home during the CCP”s “sensitive days,” such as around October 1, which marked the anniversary of the Communist takeover in 1949.

On September 9, Ms. Ji Dianxia and Ms. Zhang Chaomei were arrested. It was reported that both practitioners are still being held in the Nanjing City No. 5 Women’s Detention Center.

Ms. Xiang Jihong, from No. 854 Farm, distributed Falun Gong materials on the afternoon of October 4, 2021. When she came back home and was just outside the door, she was stopped by police station director Wang Zhibin and domestic security officer Li Zhengwen. The officers entered her home, ransacked the place, and confiscated all of her Falun Dafa books and printed materials. Ms. Xiang was arrested, and released that evening.

Yu Bing, deputy director of the Lijiaoqiao Police Station in Zhifu District, led an officer, together with two people from the Yantai Education Bureau and about eight or nine staff members of the Wanhua Community Residential Committee. They broke into Ms. Wang Zhongli’s home on September 7, 2021. They pressured her to give up practicing Falun Gong.

Yu threatened Ms. Wang that if she did not sign the paperwork, she would be arrested. He also claimed that he would ask the Education Bureau to stop her pension payments (her salary was suspended for a few years when she was persecuted prior to her retirement). Yu called her children home to help force her to sign, and threatened that he would investigate three generations in her family. He also claimed that they would suspend her nephew from school.

“Man Beaten to Disability by Police Years Ago, Faces Prosecution Again for His Faith”