(Minghui.org) Two earthquakes, of magnitudes 6.5 and 5.4, respectively, occurred within 52 seconds in Yilan County in northern Taiwan on October 24, 2021. No casualties have been reported at the time of writing. These were the largest earthquakes in the region since 1973. 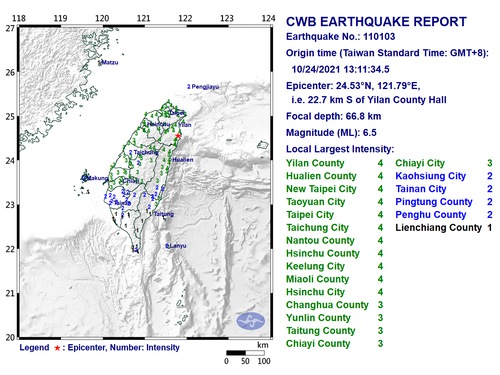 A day later, another 4.2-magnitude earthquake occurred in Pingtung, southern Taiwan, at a depth of 25.1 kilometers, at 2:17 p.m. on October 25. The quake’s epicenter was located 12 kilometers northwest of the Pingtung County and a seismic intensity of 3 was recorded in Kaohsiung City.

Seismic intensity refers to the intensity of the earthquake felt by people on the surface of the ground during an earthquake. The closer one is to the epicenter, the stronger the intensity.

Taiwan’s Central Weather Bureau classifies the earthquake intensity from 0 to 7. The larger the value, the stronger the intensity. Generally speaking, a magnitude below 2 is a mild earthquake, and the feeling is less obvious. A magnitude above 4 is a moderately strong earthquake.

In addition to the earthquakes in Taiwan, India, Nepal and France suffered heavy rains and storms in the past week.

Starting on October 15, 2021, northern India and Nepal were hit by several days of heavy rainfall. The flooding and landslides killed at least 150 people, damaged buildings and bridges, and caused traffic disruptions.

In previous years, the Indian state of Uttarakhanda has an average of 30 millimeters of rainfall in October, but the rain this year reached a new record of more than 400 millimeters. The India Meteorological Department said the rainfall has slowed down.

Northern France was hit by a storm on the night of October 20, 2021. More than 250,000 households had a power outage until the next day. Railroad traffic was also affected.

The French Ministry of Transport said that Ile-de-France, Normandy, northern France and eastern Lorraine were the worst-affected regions. Some homes in Brittany, western France were destroyed by flooding.

“Some Thoughts on Playing a Supporting Role”