(Minghui.org) After Ms. Mu Caiying, a resident in Ningqiang County, Hanzhong City, Shaanxi Province, was released in 2016 from serving 3.5 years for practicing Falun Gong, she did odd jobs to make a living, as the Dajiaba Forestry Station had fired her for upholding her faith. But the persecution was far from over. Agents of the local 610 Office chased after her whenever she moved and attempted to force her to renounce Falun Gong. In 2021, with her declined health as a result of the torture in prison, she was unable to continue working and relied on a low-income subsidy to get by.

The local authorities came to Ms. Mu’s home on September 6, 2021, and demanded she sign a document to renounce her faith. They threatened to send her to prison and brainwashing centers, suspend her low income subsidy and public housing unit, as well as firing her daughter from a government position.

Although Ms. Mu refused to comply, the officials still forced her to fingerprint the renouncing statement and took pictures of it.

This is the third time that Ms. Mu has been harassed since 2021. In January, Zhao Nancheng and Zhang from the Qiangzhou residential committee harassed her. In March, another four officials from the Hanyuan Town government searched Ms. Mu’s apartment, with the excuse of “caring” for her.

Since the Chinese Communist Party began to persecute Falun Gong, a spiritual and meditation practice, in 1999, Ms. Mu, 59, has been taken to brainwashing centers three times, forced labor camp twice (for a total of 3 years and 3 months) and imprisoned for 3 years and 6 months in total. She was subjected to various inhuman tortures while in custody and developed health complications as a result.

Four police officers from Jingqiang County Police Department broke into Ms. Mu’s apartment on August 22, 2005. They took her to the Hanyuan Town Police Station and handcuffed her to a long bench overnight.

While being held at the detention center, she was brutally beaten several times and lost hearing in both ears. The guards handcuffed her left hand to the frame of a door and kept on pushing the door back and forth until the bone on her left wrist was exposed. Then the guards switched to her right hand and continued the torture until she passed out. They handcuffed and shackled her to a death bed. At that time, Ms. Mu was having her period and the menstrual blood soaked her pants and clothes. 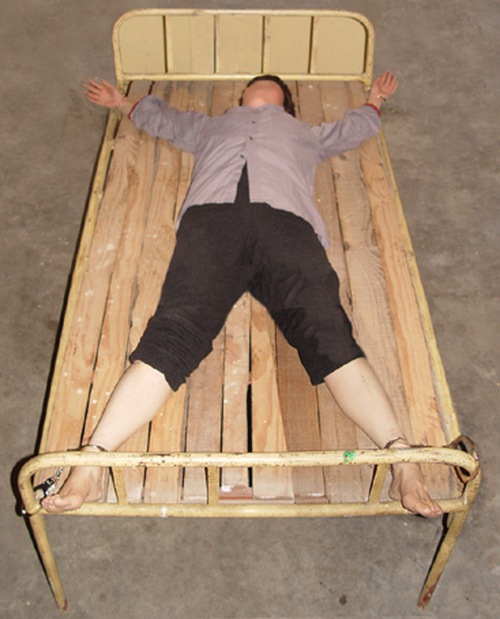 To protest the persecution, Ms. Mu went on a hunger strike. When she was released from the death-bed three days later, her scalp was totally numb. She was handcuffed and forced to wear 16-pound shackles for another week. In order to cover the torture, the detention center forcibly changed Ms. Mu’s clothes and pants before allowing her to meet with her friends during a family visit. Ms. Mu’s right ear gradually regained its hearing half a year later, but her left ear was permanently damaged.

Ms. Mu was given two years at Shaanxi Women’s Forced Labor Camp after being held at the detention center for 57 days. She was deprived of sleep, not allowed to use the restroom, and forced to do intensive unpaid labor. The guards once forced her to stand for a month as she didn’t renounce Falun Gong.

Ms. Mu was arrested again on May 7, 2008. She was taken to a brainwashing center in Hanzhong City. Due to an earthquake a few days later, she was transferred to Ningqiang County Detention Center. Insisting that she didn’t do anything wrong in practicing Falun Gong, Ms. Mu refused to memorize the prison rules or write the required statement to renounce Falun Gong. The detention center director, Liao Ninglan, beat her with a pronged leather whip. Ms. Mu’s entire back was blue and black. And she was forced to wear 30-pound shackles for 10 days.

Ms. Mu was given another two-year labor camp term without due process. She was taken to the Shaanxi Province Women’s Prison in October. She was placed in solitary confinement and verbally abused every day by the inmates. She was also forced to clean the bathroom with her bare hands. During her term, her workplace demoted her and reduced her salary, before eventually firing her.

The release notice from her second labor camp term and documents about the first term were confiscated by the police in a home raid years later.

Another Two Months of Detention

Shortly after Ms. Mu was released on August 11, 2009, she was arrested again and taken to a brainwashing center for two months, under the directive from 610 Office director Li Kejian.

Li Qingbao, a director at her workplace, sought her release but was rejected by Yan Bin, the head of the brainwashing center.

Force Fed with Urine in Prison

About ten police officers arrested Ms. Mu from her workplace on August 30, 2012, and took her to the Hantai Detention Center. The Ningqiang County Court held a trial for her on December 25, 2012, and sentenced her to 3.5 years.

A few days later, the court clerks came to the detention center and ordered Ms. Mu to sign the verdict. They threatened to send Ms. Mu to prison even without her signature. After she insisted on appealing the verdict, they said to her, “If you can have your appeal ready in 5 minutes, we’ll allow you to submit it; otherwise, we’ll take you to the prison right away.”

Ms. Mu wrote down one sentence, “There is nothing wrong with living by Falun Gong’s principles of Truthfulness, Compassion and Forbearance to be a good person. I didn’t break any law. I strongly request to appeal.”

A few months later, the Hanzhong City Intermediate Court held a hearing of her appeal case and ruled to uphold the original sentence. In January 2014, Ms. Mu was taken to Shaanxi Province Women’s Prison.

During the two years and two months in prison, Ms. Mu was subjected to various forms of torture and humiliation, causing her tremendous distress both mentally and physically.

She was deprived of sleep for a long time. As she was not allowed to use the restroom, she was forced to relieve herself in her pants. Once she couldn’t hold it and urinated in her own washbasin. Inmates Yan Hongli and Li beat and kicked her. Her left leg was injured and she was unable to stretch it. The pain kept her awake the whole night.

Another time, Ms. Mu wasn’t allowed to use the restroom for over 11 hours and she had to relieve herself in the mop bucket. Yan Hongli kicked her to the ground and the urine spilled all over the floor. Yan screamed and yelled at Ms. Mu to mop up the urine into the bucket and ordered her to drink it. When she refused, they force-fed her the urine. Afterward, the inmates beat her, causing her face to swell, her nose and mouth to bruise, and one front tooth to become loose and later fell out.

Fired for Upholding Her Faith, No Pension After Retirement

Ms. Mu’s workplace, a government-affiliated unit, suspended her pay in 2012 and issued a document to officially dismiss her from her position in 2014, which was three years shy of her 30-year service mark, at which point she would become eligible to receive pension benefits.

With no financial capacity to make the last three years of contribution to her social security account herself, Ms. Mu was barred from any retirement benefits and had to do odd jobs to support herself.

When she applied for the low-income subsidy in 2019, the authorities tried to use it as an excuse for her to renounce Falun Gong.

“The Man Who Waits for Falun Dafa Materials in the Snow”

“Breaking Through Human Notions and Letting Go Of Humanness”