Examples demonstrated in the previous two parts of this series have shown that the red color is not an auspicious color as people in communist China interpret. Of course, for the red color alone, it is part of the spectrum and should not be discriminated against. After all, colors can have different manifestations, and their connotations differ at various levels. Here we will discuss their meanings in the human world.

The Color of Blood and Fire

From a medical perspective, people with different backgrounds still often have similar neurological perceptions of the same color. That is, our cultural interpretations of a particular color could share some similarities.

For example, if Westerners are asked what stories in the traditional settings have excessive red, the most common answers are two: the blood-soaked battlefield and the flaming hell. That is, both of them associate red with a rather negative feeling.

Even positive expressions could have some negative factors. For example, the cardinals in Catholic Churches wear red to symbolize the precious blood that Jesus Christ shed for the people. It also shows their determination to shed their blood for Christ and the church. Though this is a positive expression, shedding blood itself makes people feel uncomfortable.

Such a phenomenon is also seen in the artwork field. For example, pigments containing icon oxide are sometimes called “Mars Red” or “Mars Black.” Mars is the god of war in ancient Roman mythology and the name is used to refer to the element iron in material science. 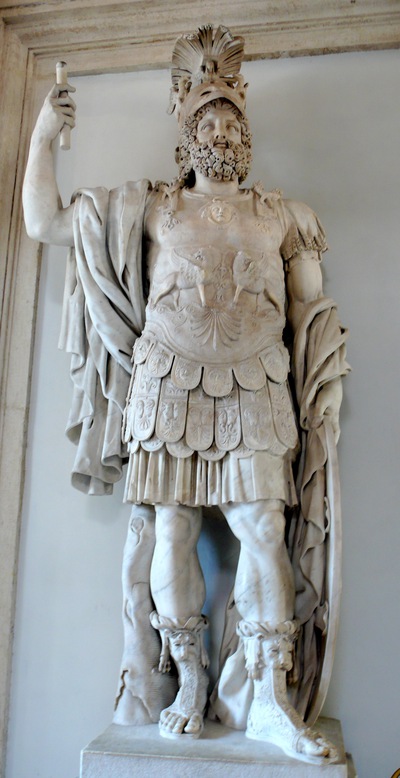 So, why does the Roman god of war correspond to iron? One explanation was that human beings were in the Iron Age when Roman mythology was popular. At that time, weapons were made of iron and they were easy to turn to reddish rust after touching blood.

Also, war would make people bleed. People’s blood is red because it contains a lot of hemoglobin whose main component is iron. So using “blood and iron” to describe war was quite accurate. As a result, in the remote ages of Western culture, the Roman god of war Mars corresponded to the red color.

Another connection comes from the red color of planet Mars, which has a surface widely covered by iron oxide. Therefore, the planet was named “Mars.” We can also see the color culture in Western astrology.

The blood and fire in the human war are already negative, but what is even more negative is the blood and fire in hell. Christians have many descriptions of the flaming hell as seen in any artwork. The “red hell” concept has been deeply established in people’s minds. 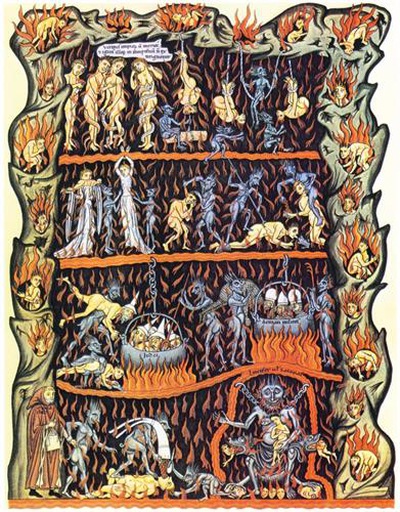 Illustration: A picture in the Hortus deliciarum, a Christian encyclopedia created around 1180, depicting hell. The picture shows a blazing fire burning everywhere in hell, representing the Western perception of the hellish environment at that time.

There is a low-level creature associated with the fire in hell. It is a vicious beast that would spout netherworld fire. However, as the mythology faded away over time, the knowledge and understanding of creatures beyond the human world continuously were lost. As a result, in Western culture that beast was called different names, making many people confused.

Translation among languages makes it even more chaotic. In English alone, similar names related to that beast include “Dragon,” “Wyvern,” “Amphiptere,” “Lindwurm,” “Wyrm,” “Drake,” and so on. It was hard for people to differentiate these strange, similar-looking animals. They then generalized these animals as “Dragon.” Chinese translate “Dragon” into the Chinese character “龙”(pronounced “Long”), an animal that exists in Chinese legends.

However, this Western “Dragon” and the Chinese Dragon (Long) do not look the same at all. Many people think the “Dragon” in English should not be translated to “Long.” Some people call it the “Western Long” to differentiate from China’s Long.

In fact, the Chinese Dragon and the Western Dragon are completely different. A mistake in translation mixed them together.

Example: Dragon from the ruins of Kaulon, an ancient Greek city, discovered near Caulonia, Italy in 1969. It was made of mosaic tiles in the third century BC.

The word “Dragon” originated from the Latin word “Draco,” meaning big snake or a snake-like large aquatic animal. The ancient French wrote it as “Dragon” and spread it to English-speaking countries in the 13th century. There were many artworks about dragon from ancient Greece to the Middle Ages. They depicted the dragon as a long striped animal, rather than the large lizard with bat-like wings that Westerners have in mind today. 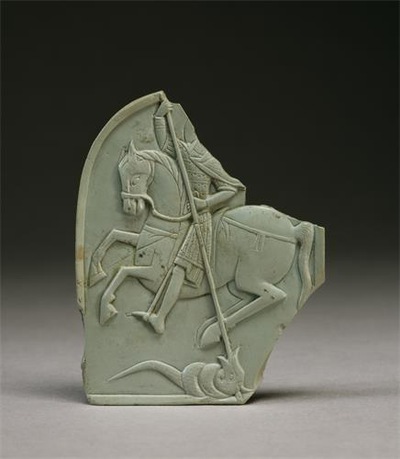 Example: A 12th-century Byzantine relief fragment of St. George slaying a dragon. One can see the dragon is carved as a snake-like animal. 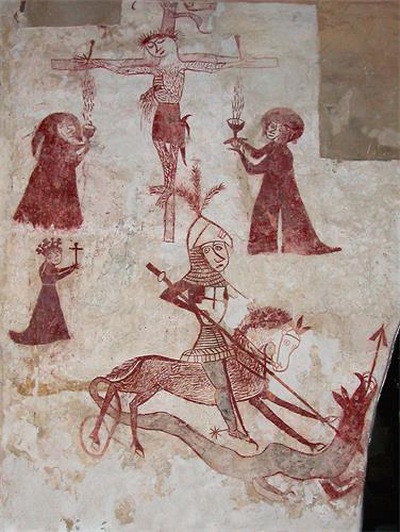 Example: The fresco of St. George slaying the dragon in the Dorfkirche Ankershagen country church in Germany, painted in the 13th century. It is relatively rough, but one can still see the similarity between the dragon depicted and the Chinese dragon.

The Book of Revelation of the Bible also has a graphic description of the dragon. In Revelation 12:3, it said that, “And there appeared another wonder in heaven; and behold a great red dragon.” In Revelation 12:9, it said, “And the great dragon was cast out, that old serpent, called the Devil, and Satan, which deceiveth the whole world.”

Since it compares the red dragon to a serpent, that dragon must be in the shape of a snake. So it is similar to the Chinese dragon, but not to the current “dragon” in Western understanding.

The Book of Revelation is the last book of the New Testament and is primarily a warning of the future. From the great succession of tribulations to the final judgment, the apocalyptic scenarios it depicted are shocking.

The Bible put it straightforward: the great red dragon is the devil Satan. Being bewitched by that red dragon means eternal death in hell. When that red poison dragon ruins the world, every person in the world needs to make a decision related to his or her ultimate life and death.

“Paying Attention to Details in Cultivation”