(Minghui.org) A unique wood sculpture exhibit held by the Taoyuan City Cultural Department early this year in Taiwan attracted the public’s attention. One of the exhibitors, Mr. Cai Mingfeng, who specializes in fine carving with delicate knife skills, spoke of his carving, and how Falun Dafa inspired him.

Mingfeng said he would not have made his achievements without Falun Dafa’s guidance. He said Falun Dafa (also known as Falun Gong) changed his attitude toward life and inspired his creations. “Falun Dafa opened up my talent for carving and has led me to break through blockage. I am happy to be a practitioner.” 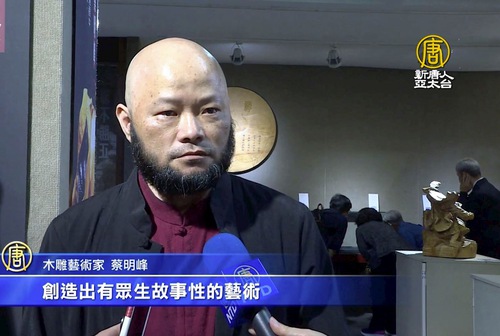 Mr. Cai Mingfeng was interviewed by the media during an exhibit of wood carving art held by the Taoyuan City Cultural Department in May 2021. 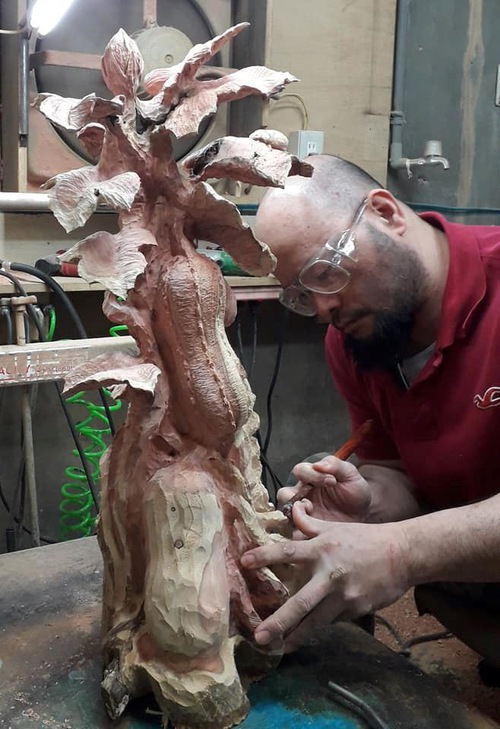 Mingfeng sculpts with different types of wood, including roots. He said that he gained a more profound understanding of life through carving on roots. Mingfeng noticed that plants grow better when they have healthy roots. It was just like people’s careers. One can only be successful with more experience. He also believed one should never forget where one's true self came from, just as plants cannot live without the roots. 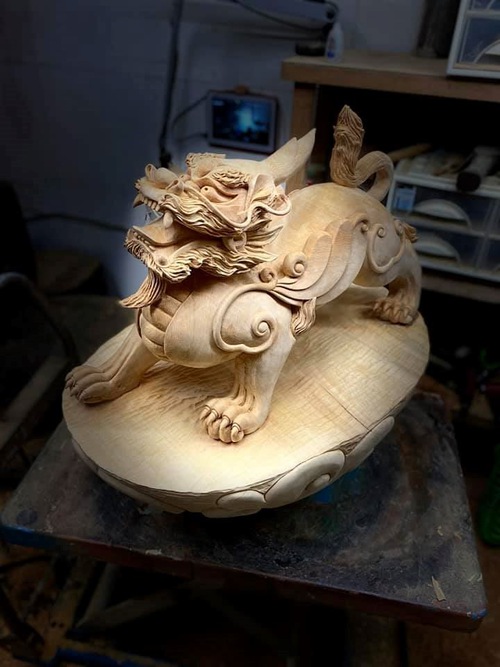 Mingfeng was born with artistic talent, but he was a loner and headstrong when he was young. He had opinions on everything and wanted to be different from others.

At 15, Mingfeng left home to study wood carving at a wood carving factory in Hsinchu City. He attended classes at night at a local art school. Mingfeng felt bored, as he did not learn much carving technique, so he dropped out of school after about a year.

When Mingfeng was 18, he met Mr. Huang Hongyan, one of the most famous local wood carving artists. He learned delicate carving skills from Mr. Huang, and became one of his most favorite students. Mingfeng said, “I studied under Mr. Huang for nearly two years. His carving method made a deep impact on me.”

Mingfeng: Nothing Could Stop My Desire to Practice Falun Dafa

During the rainy season of 2004, Mingfeng, who had just turned 30, saw a television program about Falun Dafa. When he learned that Falun Dafa was practiced in more than 100 countries worldwide, he decided to cultivate in Dafa. He read the introductory book Falun Gong, and felt that it was what he had been looking for.

He then read the main book Zhuan Falun within four days, and then all the other teachings within two months.

“At that time,” Mingfeng said, “I put all my heart into reading Falun Dafa’s books. The contents were so fascinating that I had no other thoughts or ideas except the desire to keep reading.”

When he heard about the nine-day Falun Dafa workshop, Mingfeng couldn’t wait to register. He said, “I didn’t want to get rid of illnesses through practicing Falun Dafa. I did not want to explore any principles at that time. I simply felt that Falun Dafa was good and righteous, and I wanted to practice it!”

On the third day of the workshop, it rained heavily for seven days, accompanied by thunderstorms. Bad weather did not stop Mingfeng from attending the workshop. He said, “How could I miss this opportunity that I have been waiting for so many years. Nothing could stop me from learning Falun Dafa.”

After Mingfeng began to practice Falun Dafa, he treated himself as a practitioner. His personality and attitude toward life changed. He followed the standards of Truthfulness-Compassion-Forbearance. He was always calm, and he was compassionate toward people.

Before cultivation, Mingfeng was easily provoked and irritable. He often quarreled and even fought with others. After he finished his military service, Mingfeng changed jobs frequently. He could not hold any job for long, and could not grow professionally.

After practicing Falun Dafa, Mingfeng understood the principle of “no pain, no gain.” He was no longer arrogant and aggressive, and he learned to get rid of his attachment to self-interest. Mingfeng started to work hard with a down to earth attitude. He did every job well, and no longer chased after unrealistic goals.

Once, Mingfeng parked his motorcycle at a safe place on the roadside. A motorcycle driving in the opposite direction ran into his motorcycle. Unexpectedly, the driver said it was Mingfeng’s fault. He said he would not have hit Mingfeng’s motorcycle if Mingfeng did not park there. All the passersby shook their heads when seeing how unreasonable the other person was.

“I had been practicing Dafa for more than two years at the time,” said Mingfeng. “With Truthfulness-Compassion-Forbearance in my heart, I did not argue with him. At the same time, I did not want to affect the traffic, so I gave him the money. I was calm and was not angry or offended at all. I would not have done so had I not practiced Falun Dafa. It was common sense that the other driver was at fault as he was driving in the opposite direction. I would have asked him to pay me instead.”

As Mingfeng improved his moral standard in cultivation, he also made a breakthrough in his carving career.

Mingfeng set up a painting factory in New Taipei City in 2013. With a business, he had more time to devote to carving artful pieces. 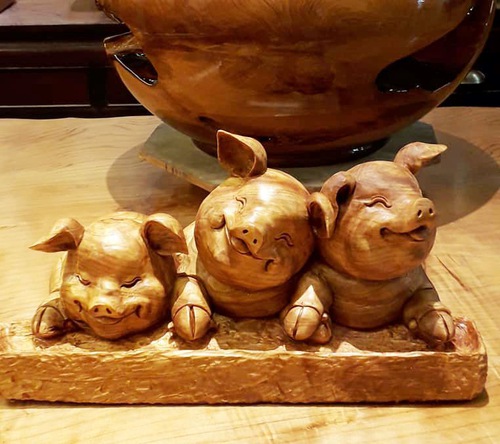 Mingfeng specializes in carving animals. He believes that each raw log has its unique color, texture, and shape, so they can all be carved into different stories. He has created hundreds of wood carvings and won several awards in local art competitions, and at wood carving festivals.

Mingfeng won second place in a wood carving competition organized by Taizhong City in 2019. Early this year, Mingfeng opened his own art studio in Sanyi Township, Miaoli County, known as the “Kingdom of Wood Carving in Taiwan.”

Mingfeng: Falun Dafa Opened up my Wisdom and Inspired Creation

“Falun Dafa opened up my talent and wisdom, and inspired me in my career.” Mingfeng said. “For example, when I outlined General Guan Yu’s posture, I experienced a blockage of how to carve his eyes to show his righteousness and majesty. When I worked on the piece of three pigs, I was stuck on carving the adorable faces. I got the idea while I was doing the sitting meditation.” 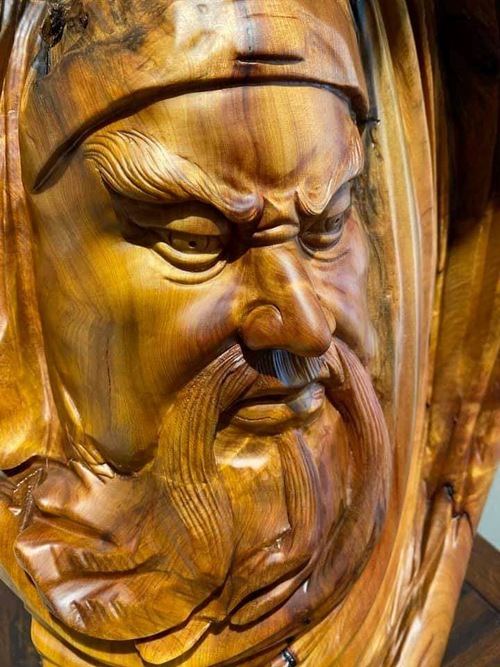 In his piece General Guan Yu, Mingfeng presented General Guan Yu, one of the most venerated characters from the Three Kingdoms era (200 – 280 AD) in Chinese history, who was known for his bravery and loyalty.

Mingfeng also produced some items representing themes such as “evil does not prevail,” “freedom,” and “longing,” which told people about the persecution of Falun Gong in mainland China.

Mingfeng said, “Evil does not prevail over righteousness. I want to remind people that it is important to stand with goodness and justice.”

Mingfeng hopes to improve in his cultivation, sharpen his skills, and be more creative with the guidance of Falun Dafa’s principles Truthfulness-Compassion-Forbearance.