(Minghui.org) Falun Dafa practitioners from Holland and other European countries, such as Germany, France, Belgium, Finland, Poland, Czech Republic, and Hungary, gathered in Amsterdam’s city-center on September 25, 2021. They held a march to raise awareness of the Chinese Communist Party’s (CCP) ongoing persecution of Falun Dafa practitioners in China and call for an end to the persecution.

Dam Square in Amsterdam’s city center is a well-known tourist attraction. On September 25, practitioners set up a booth and poster display in the square.

During a rally held before the march, Dutch Falun Dafa Association spokesperson Silvio Verbeek gave a speech introducing Falun Dafa and the principles of Truthfulness-Compassion-Forbearance. He said that Falun Dafa has spread worldwide, with more than a hundred million people having benefitted from the practice physically and mentally. He also exposed the CCP’s crimes of forced organ harvesting from imprisoned Falun Dafa practitioners and its other crimes during the 22 years persecution.

Ms. Liu Wei and Mr. Ding Lebing, members from European Tian Guo Marching Band, talked about their personal experiences when they were arrested and illegally detained by the CCP. They exposed the CCP’s evil nature and brutal persecution of Falun Dafa practitioners in China.

After holding the rally, practitioners started their march from Dam’s Square that passed through a local business district and Chinatown. 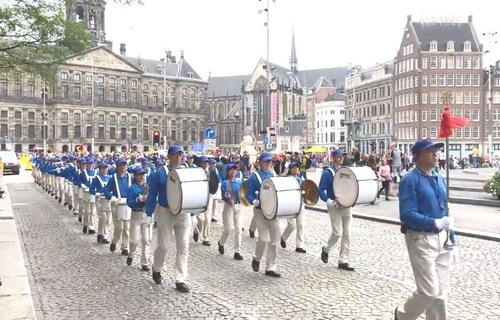 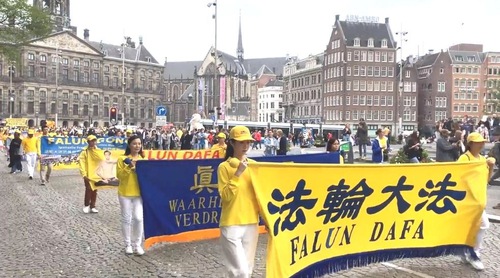 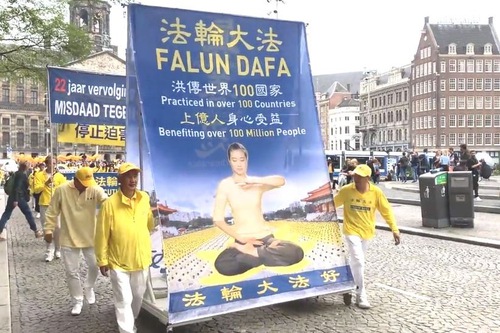 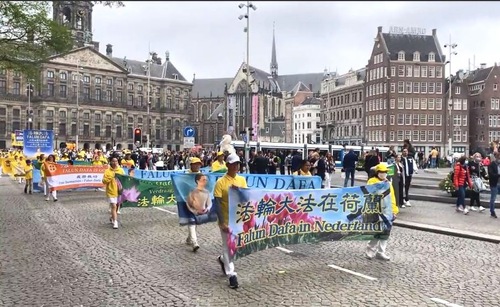 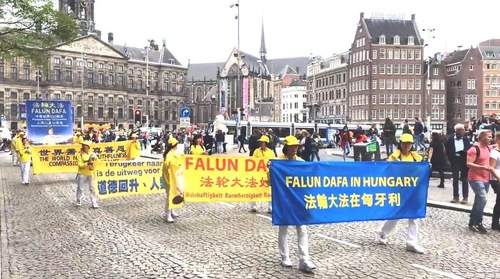 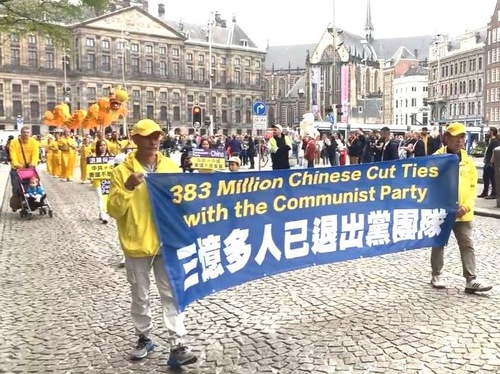 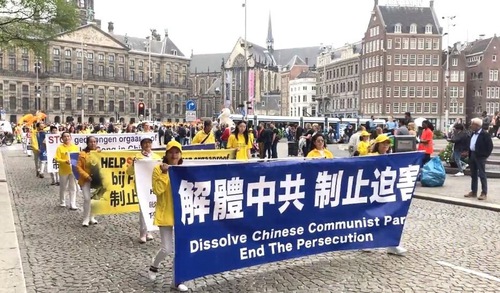 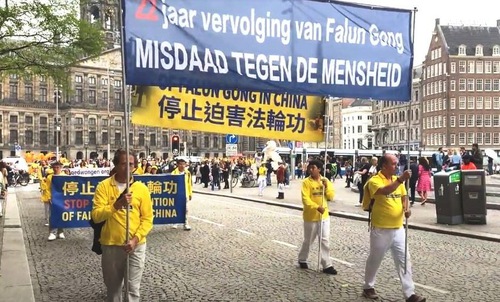 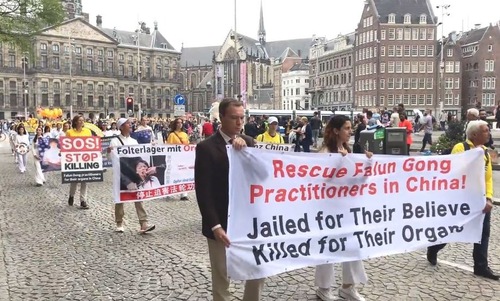 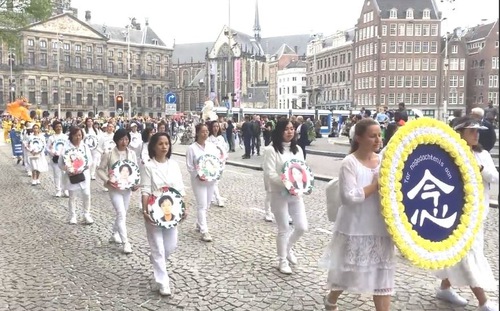 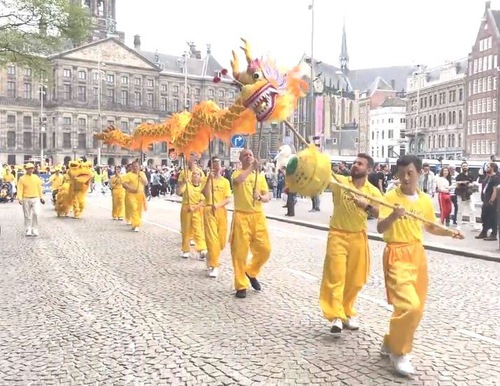 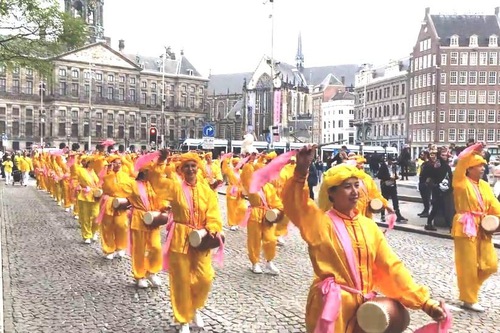 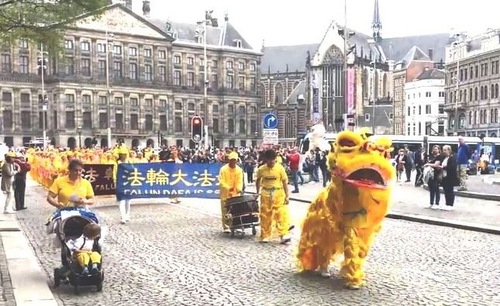 The European Tian Guo Marching Band led the parade. The band's members come from many different countries, and they’ve been performed in various countries across Europe over the last decade.

The march ended in front of the Dutch National Museum where a Falun Dafa practitioner named Ms. Zhao Meiling gave a speech recounting how she was persecuted in China for believing in Falun Dafa.

Ms. Tanja Zondervan, the founder of a Dutch media outlet website, China Alarm, stated, “I founded the website ‘China Alarm’ six months after finding out about the CCP’s crimes of forced live organ harvesting from Falun Dafa practitioners. This is very terrible and more people need to know about it. This is my way of letting more people know about this atrocity.”

Ms. Zondervan said, “Forced live organ harvesting is an crime against humanity and the CCP is committing genocide. The CCP has been mass killing its people for over 20 years and they are targeting the Uyghurs now, too. If we do not stop this now, the situation might become worse. At a world leaders’ meeting, some doctors have already claimed that this was an act of stealing human organs! This is even worse than that of Hitler and the Nazis during World War II. This is very inhumane! This is terrible! We need to stop this!”

Sandra de Bruin, a consultant who is currently working and studying in the Netherlands, said to a practitioner, “It is great that you are holding a rally to expose forced live organ harvesting. This helps more people become aware of it. I hope this brutality will stop.

“I also like your marching band. I support you in cultivating Truthfulness-Compassion-Forbearance and returning to tradition. This is how we should live: By doing good deeds and spreading love.”

Annelies Bakker, a journalist who covers agriculture, started taking pictures of the rally after taking a Falun Dafa flyer. A practitioner told her about the forced live organ harvesting currently happening in China. She was shocked, “Forced live organ harvesting? In a free country like the Netherlands, this is unimaginable! If this were to happen in the Netherlands, the Dutch would definitely protest. However, if people in China were to protest, they might face the danger of being persecuted. We are lucky to be living in the Netherlands.”

Annemarie van den Berg, a friend of Ms. Bakker, stated, “I know that people in China do not have freedom of speech. I will sign the petition to support you in ending the persecution of Falun Dafa in China. Everyone should have the right to live freely.”

German Tourist: The Chinese Communist Regime Is a Threat to The World

Mr. Michael Koehler, who came from northern Germany, stated, “I am a retired logistic manager from Germany. I am visiting the Netherlands with my friend who is from Iran. This marching band is magnificent! It is great that you [practitioners] are peacefully protesting here because a lot of people still don’t know what’s happening in China. I will show my family the pictures I have taken. The CCP regime is a threat to the whole world.”

Martha Gudmandsen, a university student from Denmark, said, “This rally is condemning the CCP and I support Falun Dafa practitioners because I know that the CCP has done many horrible things in other countries. I believe that people should have freedom of belief. However, this is not so in communist China because communist regimes are unethical and horrible. One cannot constantly live in fear because of what one chooses to believe.

“When I return to Denmark, I will do some research and see if the people of Denmark can do something about it.”

Mr. Zack, who owns a pharmacy, said, “This is my first time witnessing a rally like this. I really want to know more about Falun Dafa. Truthfulness-Compassion-Forbearance are very good principles and it represents something very good. Why are practitioners in China being persecuted? I know that if you do not play by their rules in communist China, you will be persecuted. I think communism is the core of all problems.”

Enzing Noah, a university student in the Netherlands, said, “The CCP punishes those who do not listen to them and forbids anyone from voicing their opinions. This isn’t right. The CCP should be stopped.”