(Minghui.org) Falun Dafa practitioners have established many group practice sites all around the Toronto region. They started out with 12 practice sites on the weekend of October 3-4, and by the following weekend, they were up to 17. Many people were drawn to the practice. Some wanted to learn about Falun Dafa, while others felt a miraculous and extraordinary energy. 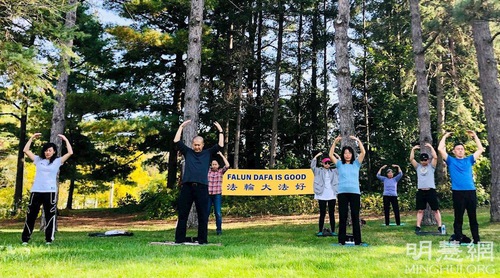 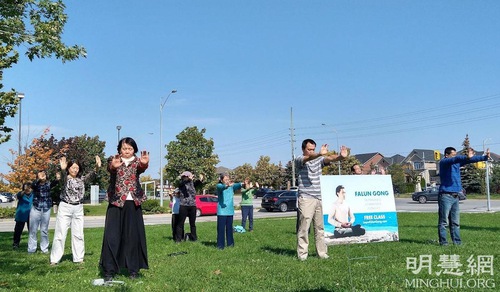 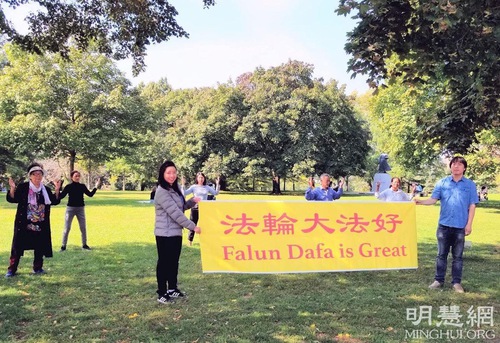 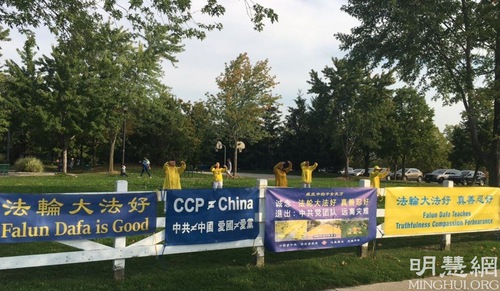 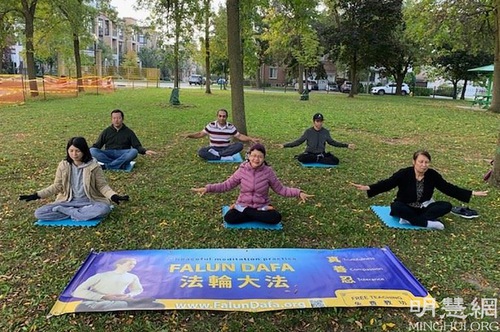 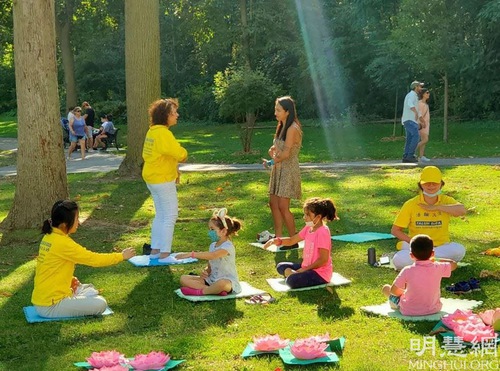 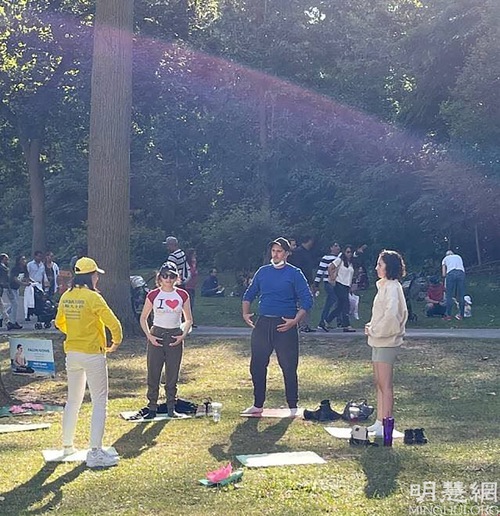 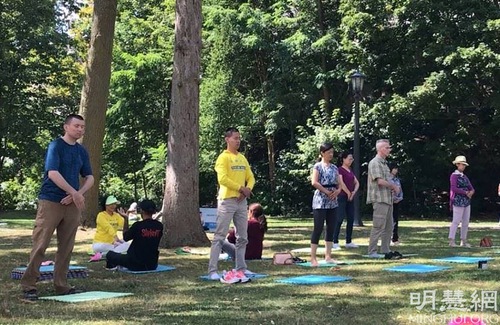 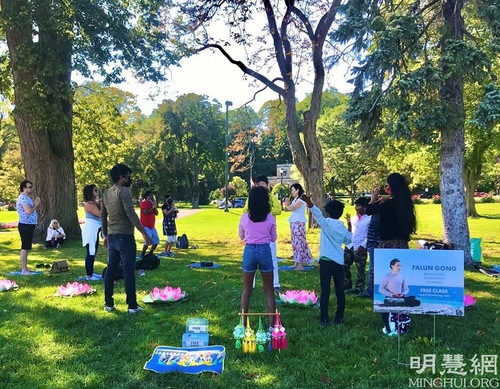 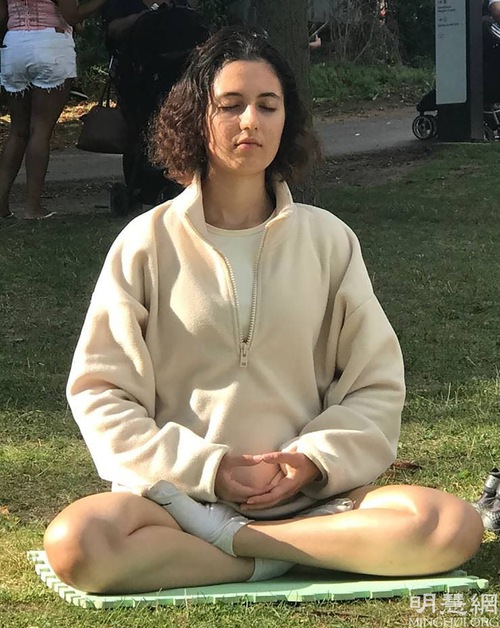 A tourist doing the sitting meditation at Niagara Falls. 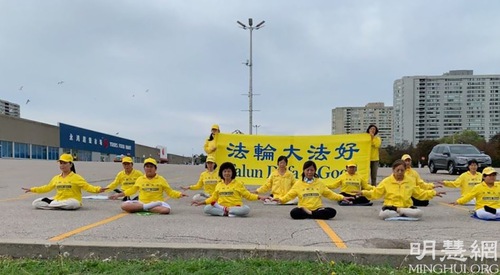 Falun Dafa practitioners at the group practice site on Finch Ave. and Warden Ave. in Scarborough.

“This Practice is Quite Extraordinary” 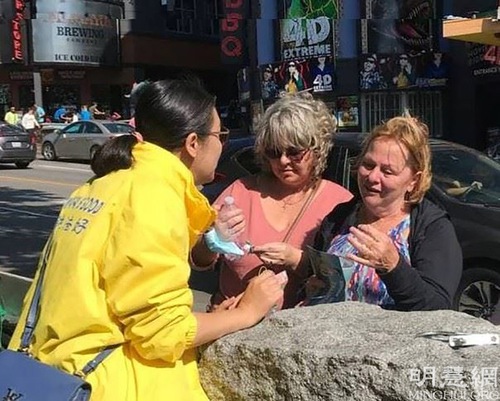 Judy inquired about Falun Dafa. After doing the exercises, she was surprised at how extraordinary Dafa was.

When Falun Dafa practitioners arrived at Niagara Falls from Toronto, a lady named Judy and two of her friends stopped by and started to read a flyer. Judy said that though she practiced yoga, she hasn’t been able to enter a state of tranquility.

A practitioner told her, “Falun Dafa is the universe’s Dafa. So long as we practice it, we are constantly upgrading ourselves and naturally our hearts and minds will enter into tranquility.” Judy listened attentively and asked when she could give the exercises a try. The practitioner told her that she may start anytime. Judy said that she’ll walk around with her friends and would come back later.

After five minutes, Judy returned and could not wait to give the exercises a try. She said, “I had injured my right arm in the past and I haven’t been able to straighten or raise it up high. I was only able to raise it to my chest level for these past years.” The practitioner shared about how her mother, who was also a Falun Dafa practitioner, had serious adhesive capsulitis in the past and could not raise her left arm above her chin. However, after practicing Falun Dafa, her mother’s illness disappeared. Judy had newfound confidence and started learning the exercises.

Judy was unable to straighten her right arm when she started to do the first exercise, Buddha Showing a Thousand Hands. The practitioner encouraged Judy and gradually they saw a change in her. She did the first exercise again and realized that she was able to raise her arms. She exclaimed, “Look at my arm! I can raise it now! I can straighten it!”

Judy said that Falun Dafa was truly miraculous and “there are a lot things the human eye can’t see. However, it doesn’t mean that it doesn’t exist. The Creator created this world as such.” The practitioner said, “You’ve mentioned the Creator. Buddha Shakyamuni once said when udumbara flowers flourish, it means that the Creator has descended to the world to save sentient beings. Udumbara flowers are blooming around the world now and it means that the Creator may have already arrived.”

The practitioner continued to chat with Judy about the pandemic, the Chinese Communist Party’s (CCP) lies and propaganda and the evil persecution. Before leaving, Judy signed a petition to stop the persecution and said that she will read Dafa books and practice the exercises well when she gets home.

“I Am Able to Eliminate My Fear Through Doing the Exercises” 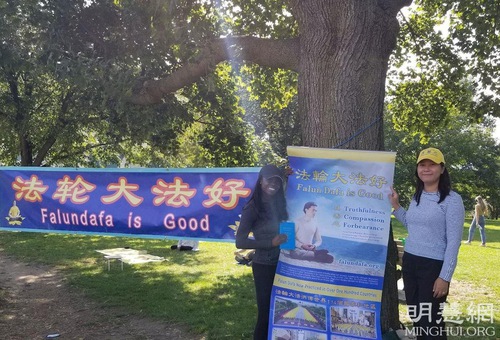 Zainab (left) took a picture with the practitioner, who taught her the exercises.

Zainab originally planned to watch the sunset at Riverdale Park, but was drawn by the practitioners’ mediating upon passing by. She read a flyer and became interested in the practice.

The practitioner talked with Zainab about her fear of bugs and said that in the course of cultivation, one has to eliminate many attachments, including the attachment of fear. The practitioner told Zainab that Falun Dafa practitioners adhere to the principles of Truthfulness-Compassion-Forbearance and happily recited the equivalent Chinese characters: “Zhen-Shan-Ren.”

Zainab said, “This practice is really good. I will continue practicing it since it helps me with my attachment of fear. I will look for Master’s lectures once I get home and will read them. I will also come here every weekend from now on.”

“Elderly Woman and Her Son Resist the “Zero-Out” Harassment Campaign”