(Minghui.org) Falun Dafa practitioners held a rally and parade in Leipzig on October 9, 2021 to introduce the spiritual practice and tell people how the Chinese Communist Party (CCP) has persecuted it for 22 years.

October 9 is an important anniversary in Leipzig—it marks the peaceful protest, also known as Lichtfest, in 1989. Thirty-two years ago, 70,000 people demonstrated peacefully in Leipzig, which eventually led to the collapse of the Berlin Wall and the reunification of Germany.

The practitioners first gathered on Augustusplatz for a rally at noon and then marched through the inner city’s busy streets. The parade was led by a waist drum team, followed by a float featuring a replication of the book Zhuan Falun. Other practitioners carried copies of Zhuan Falun in different languages, while still others demonstrated the Falun Dafa exercises. The next section of the parade focused on the CCP’s persecution of Falun Dafa and the regime’s organ harvesting from living practitioners. 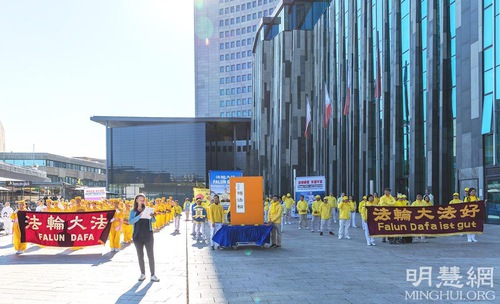 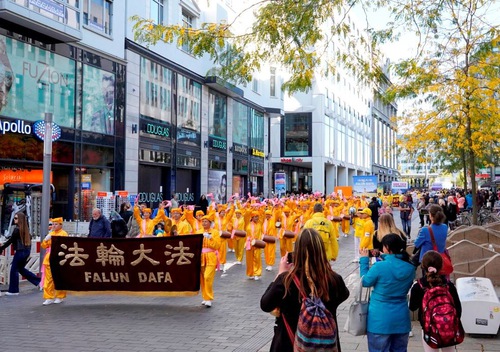 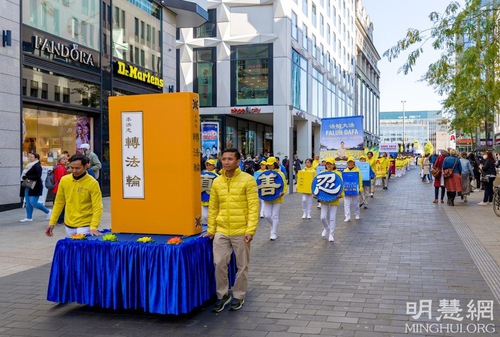 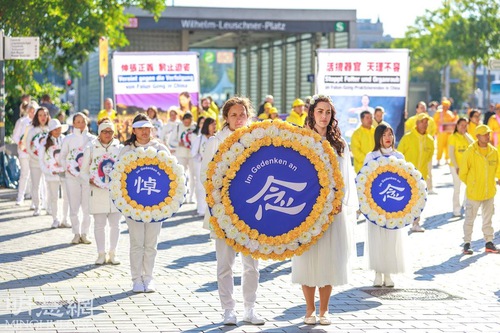 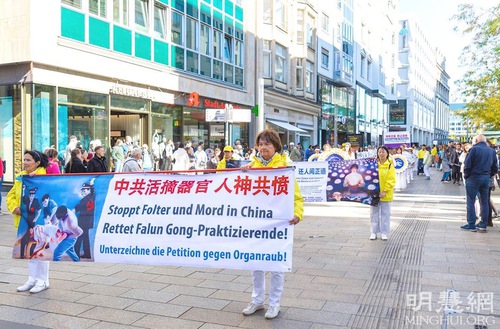 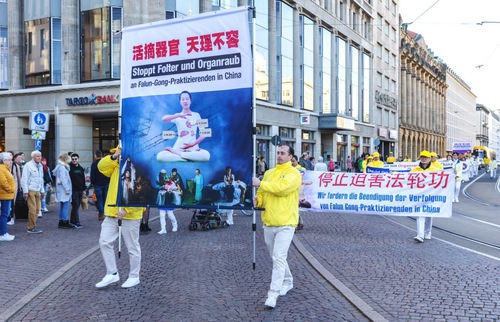 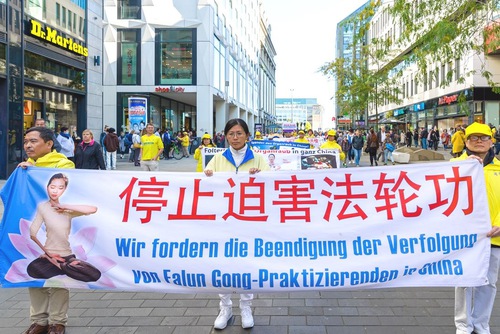 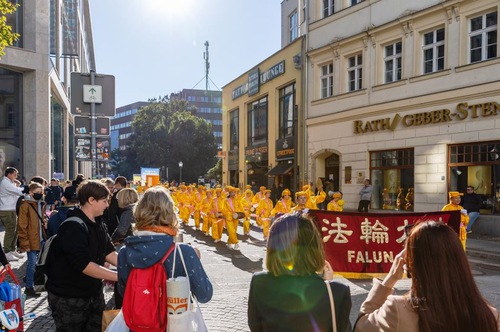 People stopped and watched as practitioners peacefully marched through the center of Leipzig on October 9.

Saturday, October 9, was a fine autumn day and many people were out enjoying the weekend. Many who stopped to watch the parade took photos and accepted fliers from practitioners. Some talked with practitioners and asked where they could learn to practice Falun Dafa.

As part of the day’s events, practitioners set up two booths in the inner city and handed out information about the CCP’s persecution. Many people signed the petition to condemn the persecution. 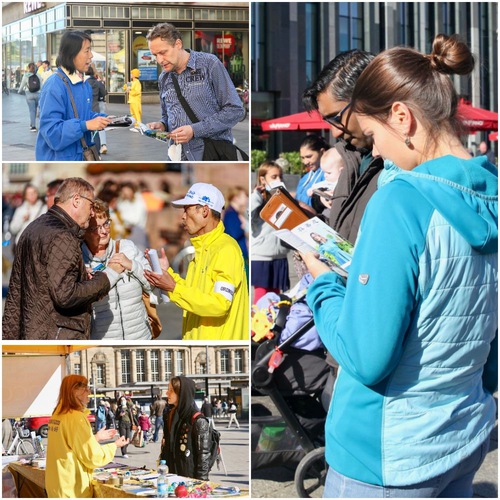 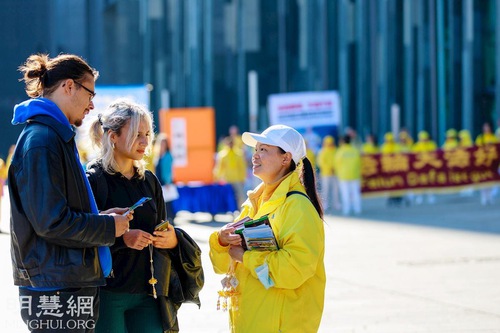 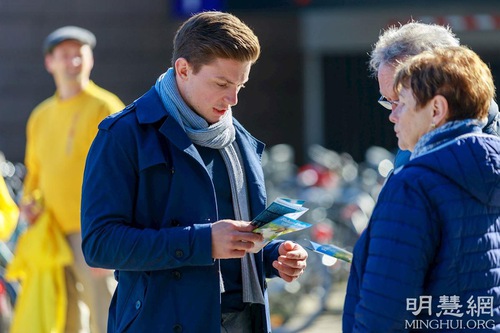 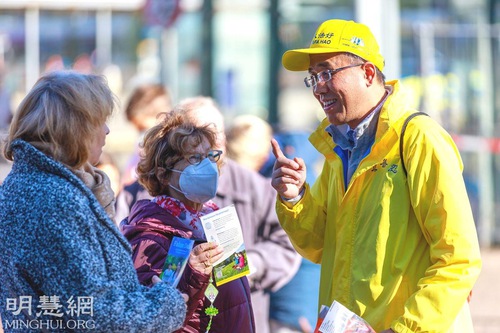 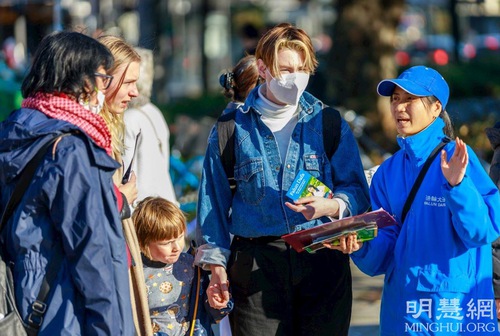 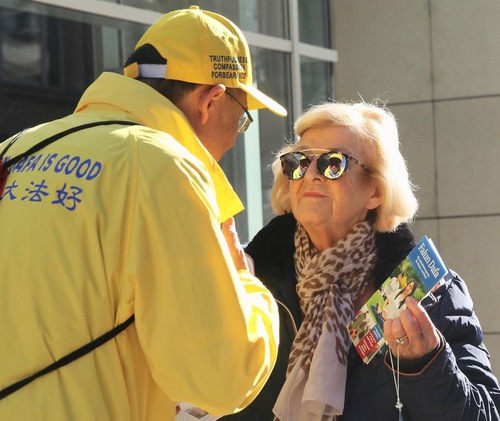 A woman asks a practitioner where to learn Falun Gong and if she could learn it. 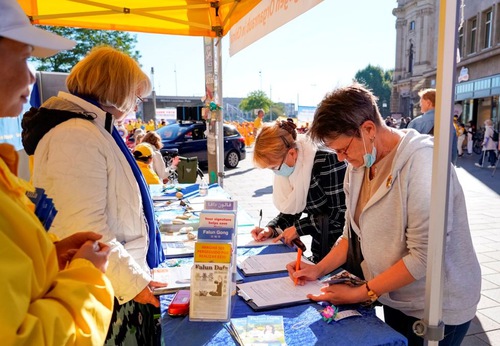 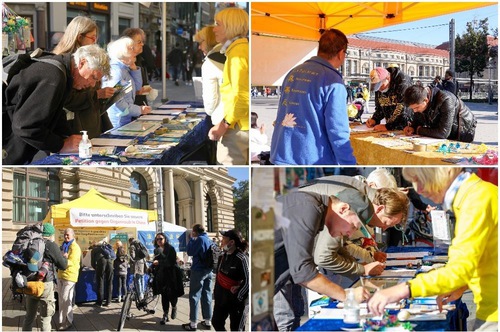 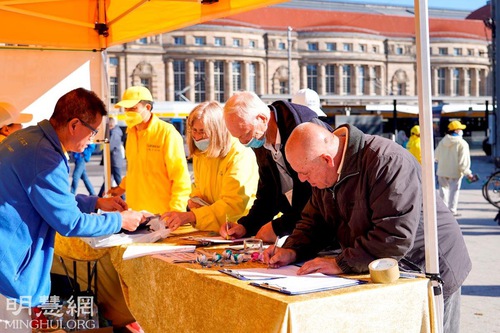 Hubert Körper, head of the China Working Group in the ISHR, sent a letter of support, which a practitioner read out during the rally.

In his letter, Mr. Körper said that the CCP continues to persecute people, especially Falun Gong practitioners who refuse to give up their faith. Human rights in China, such as the right to life, freedom of the press, freedom of belief, freedom of assembly, and freedom of speech, have been trampled upon.

Mr. Körper wrote, “As a human rights organization, we have been asked repeatedly, ‘Why does the CCP persecute peaceful movements like Falun Gong?’ In 1998, the Chinese government estimated that the number of Falun Gong practitioners was 70 to 100 million. Did so many people pose a threat to the regime? However, the real reason for the CCP’s serious human rights crimes against Falun Gong may be another one: Falun Gong’s principles of Truthfulness-Compassion-Forbearance is in sharp contrast to the CCP regime’s evil.”

Mr. Körper also mentioned that the CCP was accused of harvesting organs from living Falun Gong practitioners for profit. He stated that since 2000, shortly after the CCP began to persecute Falun Gong, the number of Chinese transplant centers have increased significantly.

He commented that China’s human rights policy under the CCP will never change, and that the regime will always ignore human rights to consolidate its power or cover up crimes that have already been committed. 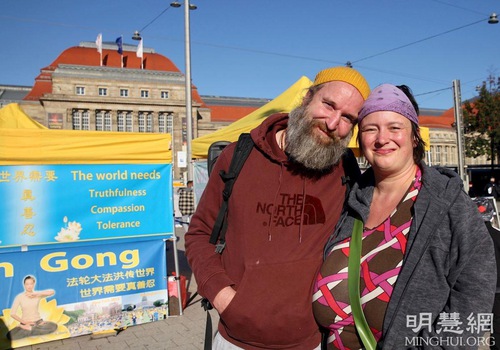 Thorsten Bern-Schneider and his wife Anne

Thorsten Bern-Schneider and his wife Anne signed the petition to protest the persecution. Thorsten said while pointing to practitioners as they marched by, “I am convinced by such a wonderful thing. I see it, feel it, and love it. My signature is just a little support.”

He said he thought the world was made up of two things, “Light and darkness. Darkness belongs to Satan.” He pointed to the sunlight shining through the clouds and illuminating the scene and gave an analogy that Falun Dafa practitioners also brought brightness to people.

He said that Falun Dafa’s principles of Truthfulness-Compassion-Forbearance are great and that following them in one’s daily life is wonderful.

Mr. Bern-Schneider said that the CCP’s persecution of Falun Dafa was horrible. He pointed out that darkness fears the light. As soon as light illuminates the shadows, the darkness disappears.

He said, “What we see now (practitioners’ march) is color, light, warmth, and brilliance. The darkness cannot win.” 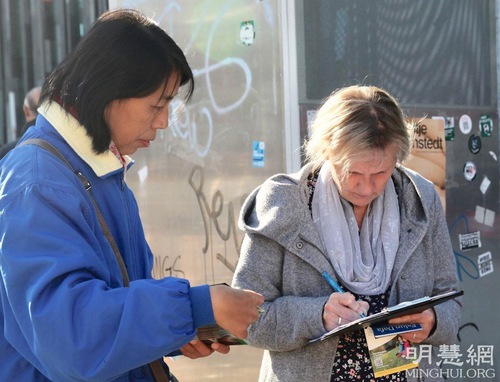 Sybille, a musician, stopped to observe and said that injustices that people can’t ignore were being brought to their attention, and she signed the petition.

She said she opposed suppressing anyone who has different ideas. She knew what was happening in China to Falun Gong practitioners. She said that most Westerners knew little about the persecution and that the media should report on it more and discuss how Westerners should respond.

She said she had read articles about the CCP’s organ harvesting from living Falun Gong practitioners, but this information was seldom published. She said that was a scandal.

She said, “We must respond more to this. German companies doing business in China should also behave differently.”

Retired Reporter: Each Signature Is Important 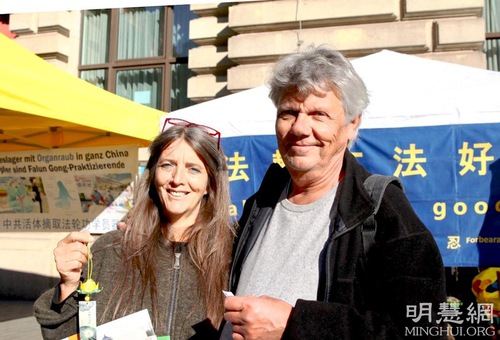 Ms. Beate Burde, a nurse from Frankfurt, and Mr. Ulli Burde, a retired journalist, signed the petition to protest the persecution. This was the first time Mrs. Burde had ever heard about Falun Dafa. After talking with a practitioner, she said, “Signing this is very meaningful.”

Mr. Burde also said that it was the first time he’d seen practitioners’ activities and he wanted to learn more about it. He said it was important for the German government to do something to stop the CCP’s persecution. “Although Germany is not big and Europe doesn’t have as much influence as we would hope, every signature is important,” he said.

Annemarie van der Wijk, who teaches at Leipzig University, said the practitioners’ gathering was very peaceful, and she wanted to know more about Falun Dafa. After talking with a practitioner, she learned about the persecution and signed the petition.

“The CCP persecutes good people who practice Truthfulness-Compassion-Forbearance,” she said. “I can’t understand it. I hope the persecution ends soon.” 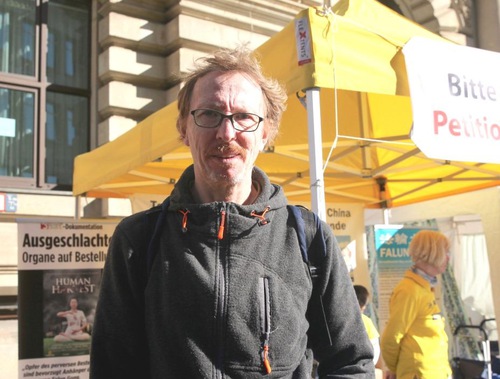 Mr. Nietzschmann was imprisoned by the East German Communist Party and said he understands the true nature of communism.

Mr. Nietzschmann fled the former East Germany in 1981. He was imprisoned by the communist regime of East Germany and said he knew the true nature of the communist party. After signing the petition he said, “I think the persecution of human rights is wrong. It can’t be this way.” He condemned the CCP’s persecution. 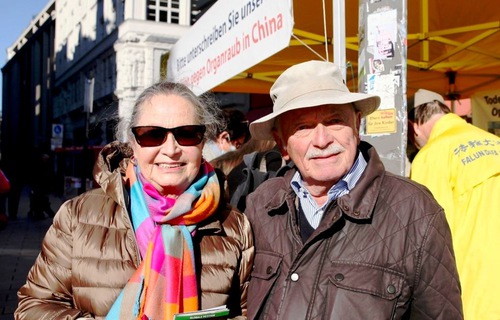 Kitty Mocikat and her husband

Mrs. Kitty Mocikat worked as a translator before retiring, and her husband was head of a large company before he retired. They are from Bavaria, Germany.

After signing the petition, Mrs. Mocikat said, “I oppose the theft of organs and the persecution of Falun Dafa. Everyone has the right to live and enjoy freedom.”

Mr. Mocikat said, “I support Falun Dafa from the bottom of my heart.”

“Learning To Cherish What We Have”