Our world is a colorful one, with different nations cherishing their own unique traditional colors that are not only something visual—their unique colors also reflect each country’s history and traditions.

In the world today, these traditional colors all seem somewhat similar to each other, but their connotations can be quite different. Given the great diversity of colors, this series of articles will analyze a few of the most common ones.

In today’s China, when it comes to traditional colors, many people think of red, as it is seen as a festive color that represents happiness. For example, people tend to use a lot of red to decorate their home for a wedding, and both the bride and the bridegroom often wear red; for Chinese New Year, people put up couplets on red paper; red is also a dominant color at celebrations of all kinds, let alone the zealous political propaganda about “Red China.” In general, red appears to have a rather positive implication in people’s minds, as they believe that red symbolizes prosperity and good fortune.

On researching ancient Chinese culture, however, the modern harsh color of red is actually quite out of tune with China’s three traditional religions of Confucianism, Taoism, and Buddhism. In fact, the color tone of each different dynasty in ancient China tended to be solemn, peaceful, simple, or elegant, and none was nearly as harsh and dazzling as the red that we see today. After all, red is not consistent with the generally introverted character of the ancient Chinese.

So, what are China’s traditional colors?

First of all, we may need to take a look at the theory of Five Virtues. It was advocated by Zou Yan, a renowned scholar representing the Yin -Yang School during the Warring States period (475 – 221 BC).

Although this theory had a significant impact on Chinese history, many people today have never even heard of it. This is because so much of Chinese traditional culture was demonized by the Chinese Communist Party (CCP), leaving many fundamental values forgotten and abandoned.

According to theFive Virtues Theory, each of the Five Elements of metal, wood, water, fire, and earth represents a unique virtue, and together they move cyclically.

Zou’s Five Virtues Theory was widely acknowledged and accepted in Chinese history. From the Qin and Han dynasties to the Song, Liao, and Jin dynasties, court officials of each dynasty would always discuss and affirm their own virtue. It was then made known to the entire country to prove the dynasty’s legitimacy. It also implies that a dynasty could not be ended by force alone, that the successor had to have the necessary virtue bestowed upon him by heaven. Although the Yuan, Ming, and Qing dynasties did not officially declare the kind of virtue they represented, all their emperors were considered to be following Heaven’s arrangements. 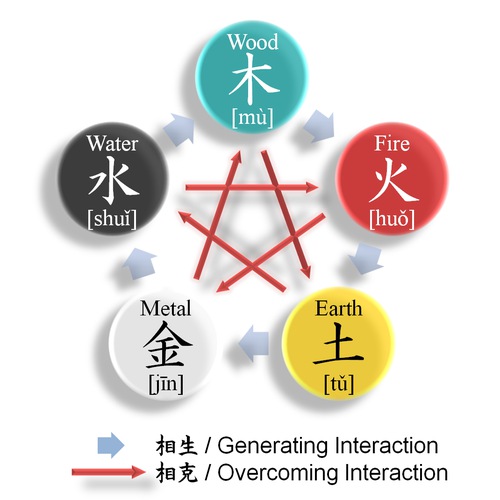 Colors of the Five Virtues and their generating and overcoming interactions

Different dynasties corresponded to different virtues and were represented by their corresponding colors, such as white, blue, black, red, or yellow. As mentioned earlier, when the Qin brought an end to the Zhou dynasty, they believed that they were following Heaven’s will, water overcoming fire. Since the color corresponding to water is black, the Qin dynasty used black as their representative color, and the Qin emperor wore black robes.

Shi Ji (Records of the Grand Historian), one of the most respected history books, had an entry in the Basic Annals of Qin Shihuang,the First Emperor. He promoted the tradition of Five Virtues, believing that the Zhou dynasty (with the fire virtue) was replaced by Qin (with the water virtue) since water overcomes fire. As it says in the book, “The new calendar started in October. The clothes and flags were all black.”

Similarly, Emperor Xuanzong of Tang also wrote in an article for the grand ceremony of worshiping at Mount Tai, “Heaven blesses the Li clan (surname of the Tang emperors) with the earth virtue.” Clearly, the Tang dynasty was based on the earth virtue. Therefore, it respected the corresponding color of yellow. However, this did not mean that everybody could wear that color. In fact, yellow was reserved exclusively for the imperial family, not ordinary people.

Taking the Ming and Qing imperial palaces as an example, the cinnabar red on the palace walls is actually a color between orange and red. The tone is a bit gray, not the modern bright red. Also, when red was a dynastic color, ordinary people were not allowed to wear it, as the color would be reserved for the emperor.

For example, although the Ming Dynasty did not formally announce which virtue it represented, many official documents mentioned that the Ming dynasty was based on the fire virtue. Liu Chen, a minister of the early Ming dynasty, wrote that “Taizu of Ming is a king of the fire virtue and he embraces the color red.” The Ming dynasty advocated the red to represent the fire virtue, and ordinary people were not allowed to wear clothes in that color.

The color red can be categorized into a variety of shades and there were detailed rules for their use on special occasions and according to one’s social status. Ordinary people were not allowed to use a pure red color. They could only use lighter shades of red such as peach blossom and so on. The restrictions might be relaxed a bit for a few major ceremonies and in special circumstances.

It is worth mentioning that the “red” in ancient times even had a different meaning from the “red” in modern Chinese. According to Shuowen JieZi, an ancient Chinese dictionary from the Han Dynasty, red was “a mixed color of red and white.” In other words, the “red” in ancient Chinese referred to a shade of pink, not the sharp red that people think of today. However, for the sake of easy understanding for today’s readers, I will use “red” as a general term when referring to similar colors with different names in this article.

From the perspective of a higher level, the reason that each dynasty had its own unique history and cultural heritage was because each one stemmed from a different origin. Therefore, the colors they embraced naturally varied from one another. The theory of five virtues and five colors may only explain things at a certain level in the human world and may not be the fundamental reality.

“Cultivating Myself Amidst Tribulations”