(Minghui.org) Today's news from China includes incidents of persecution that took place in 5 cities or counties in 7 provinces, where at least 16 practitioners were recently persecuted for their belief. 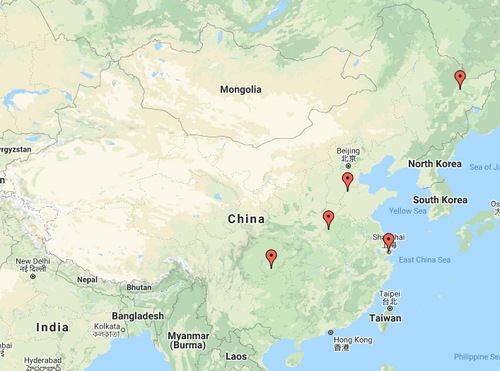 Ms. Song Huilan, Ms. Yuan Lixin, and Ms. Zuo Xiuwen were followed by a plainclothes police officer when they were talking to people about Falun Gong on the afternoon of September 29, 2021 in Jiamusi Children’s Park. They were arrested and detained at the Baowei Police Station in Xiangyang District. Their homes were ransacked that evening.

Ms. Song Huilan’s daughter went to the police station to bring some food and clothing to her mother on the afternoon of September 30, 2021. When she saw Ms. Song sitting in the interrogation office with her prosthesis lying on the ground, she burst into tears and hugged her mother. In 2010, Ms. Song was detained in the Tangyuan County Detention Center and was brutally tortured. As a result, one of her feet had to be amputated. The police officer made her daughter leave because she cried.

Three practitioners were taken to the Huanan County Detention Center on the evening of September 30, 2021. Ms. Zuo was denied admission due to her poor health and was released. Ms. Yuan was placed under 15-day administration detention. Ms. Song ’s family went to the Baowei Police Station on October 1, 2021 and asked about her situation. They were told that the officer in charge of her case was not there. When they returned the next day, they were told that the officer in charge went to the detention center and they would be contacted later.

Before Ms. Huang Chunlan was taken to the detention center, she was detained in a hostel near the intersection of Yanxiang Road. The police arranged for a middle-aged man to beat Ms. Huang. She was beaten badly before the police interrogated her.

Officers from the Changjia Town Police Station in Qingyun County went to Ms. Xu Qingmei’s home on September 5, 2021. She was not at home. Her family members stopped the police from taking photos. The officers went to harass Ms. Xu again on September 14, 2021. They found the key and entered Ms. Xu’s home. They confiscated some Falun Gong books and other things. Ms. Xu has since stayed away from her home to avoid further persecution.

Officers from the Changjia Town Police Station also harassed practitioners Hu Xiusheng, Xu Heqing, Hu Huarong and others. After they found the truth clarifying materials in the homes of Ms. Xu Heqing and Ms. Hu Huarong, they arrested the two practitioners. It’s unknown where the practitioners are being detained.

Shi Biao, who lives in Qingyun Town, was harassed by officers from the Qingyun County Police Department. His home was ransacked and all the Falun Gong books and electronic devices were confiscated. Shi’s cell phones were later returned. Officers from the Qingyun Town Police Station went to Shi Biao’s home recently and confiscated the computer again.

Officers from other towns and townships also harassed practitioners in September 2021. They took photos and questioned or threatened practitioners. An officer directly told a practitioner that they would come to their homes every three months.

“Go Coach Imprisoned for His Faith”