(Minghui.org) Baia Mare is the northernmost city in Romania, where the edible chestnut grows. This wonderful tree, which reaches ages of over 500 years and heights of over 20 meters, originally from Asia Minor and adapted in Europe, is the symbol of the beautiful city.

That is why the Chestnut Celebration was established in 1993. The three-day festival of entertainment, culture, and food became a popular annual event until the appearance of the pandemic.

This year, however, Falun Dafa practitioners marked the Chestnut Festival by coming to Baia Mare from many parts of Romania. They organized events on the three days normally dedicated to the celebration. 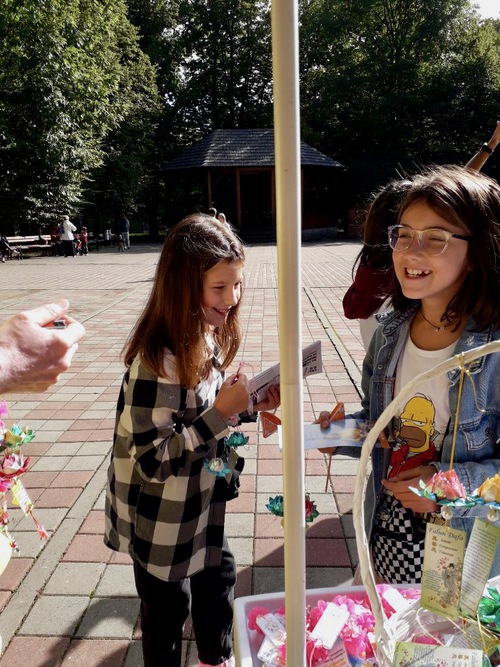 Practitioners demonstrated the Falun Dafa exercises, passed out fliers and origami lotus flowers, and talked with passersby who stopped to learn more. Most people, regardless of their age, were welcoming, open, and wanted to learn more about the meditation practice.

They listened carefully when practitioners described the persecution of Falun Dafa taking place in China, and they were visibly moved by the suffering and atrocities being committed in China against innocent people who wish to uphold the moral values of Truthfulness-Compassion-Forbearance. Quite a few people commented that these values should be cherished and be part of every individual’s behavior.

Some people told practitioners they had learned about Dafa and the persecution from the internet.

Many people in Baia Mare were outraged by the crime of the century: the forced harvesting of organs from Falun Gong prisoners of conscience in China. When they asked what they could do to help, practitioners invited them to sign a petition calling on the President of Romania to condemn forced organ harvesting from Falun Gong practitioners in China. 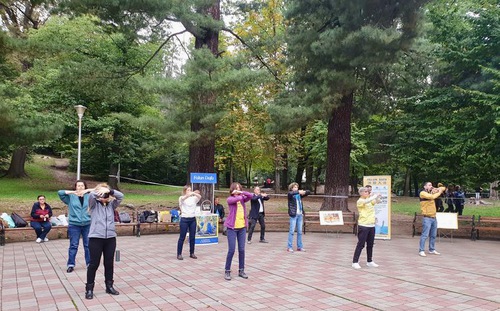 An elderly lady’s face lit up when she saw the Falun Dafa exercises and banners. She asked one of the practitioners about the purpose of the exercises and was delighted to learn that there was a group practice in Baia Mare on Sundays. She lamented that such events that promote moral values and show the beauty of the ancient traditions of mankind are increasingly rare nowadays and, sadly, noise and vulgarity have taken their place.

An 85-year-old gentleman attentively watched the meditative exercises presented near the Monument of the Romanian Soldier and expressed his wish to try them out. A father joined the practice group with his daughter, who was no more than four years old, and at the end he encouraged her, happy that she had done well under the guidance of a practitioner. Two ladies in sportswear also joined the group to try out the exercises, and a teenage girl paid careful attention while learning the movements and performed them with great accuracy.

A mother and her daughter showed interest in the exercises and found out where the Baia Mare group practice site is. The mother said that she had read about an experiment that had analyzed the effects of running compared to qigong exercises. The results were surprising and showed that runners were not at an advantage. A practitioner explained that Falun Dafa exercises have a good effect on both the body and mind, charging the body with pure energy from the universeand helping one to find inner balance. The mother said she was glad that the exercises are also easy for older people to do. 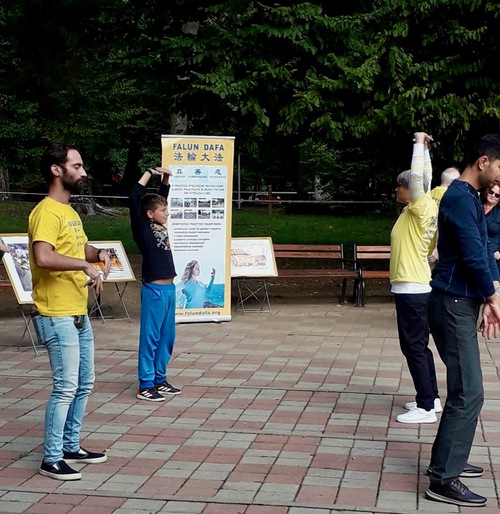 A boy around 12 years old named Cristi received an origami lotus flower. Before he left, he asked for another flower for his grandmother. Cristi returned shortly and watched the group perform the exercises. He asked to learn, so a practitioner showed him one of the exercises. At the end, he said enthusiastically that he “felt the energy.”

Cristi had promised his mother he would be home by a certain time, so he reluctantly parted from the group, hugging the practitioner who taught him the exercises as he left. 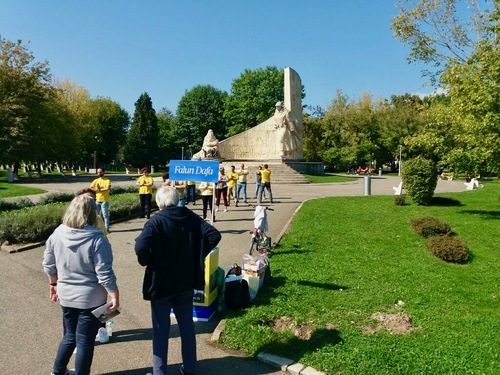 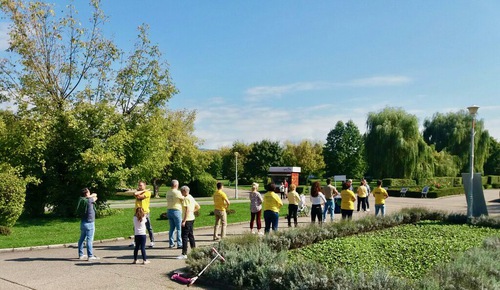 Practitioners demonstrate the Falun Dafa exercises near the Monument of the Romanian Soldier in Baia Mare on September 26, 2021. A little girl and her father learn the exercises. 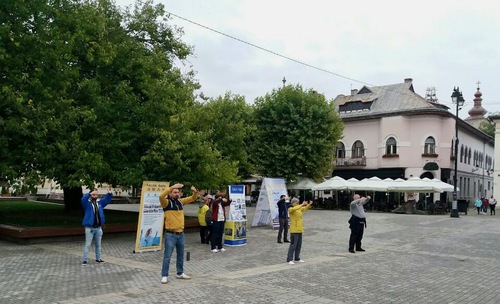 “Truthfulness, Compassion, and Forbearance Are Essential”

A few gentlemen, accompanied by children on their bicycles, saw the exercises from a distance and stopped to learn about the practice. They admired the lotus flowers offered to the children, and one of them was glad to hear the principles of Falun Dafa. “That’s what matters!” he said. “Truthfulness, Compassion, and Forbearance are essential! Without them the world would collapse.”

He was alarmed to hear that in China, practitioners are tortured in prisons and killed for organs on a large scale. He wondered why the media doesn’t talk about these atrocities. We should all know, he said, how practitioners in China are condemned to work in labor camps, how they are tortured with electric batons, injected with toxic substances, and raped by groups of criminals. He said the lives of model citizens have become bargaining chips as the Chinese regime profits from selling practitioners’ organs and incinerating their remains to erase all traces of the crime. 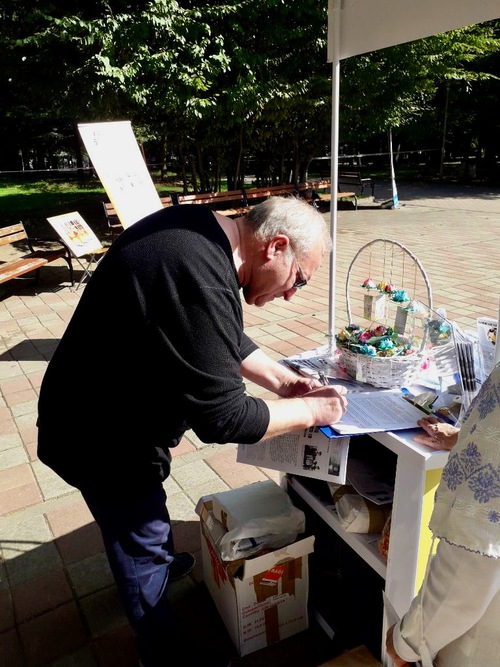 After a married couple in the area learned about the persecution in China, the wife commented, “This is how it was under dictator Ceausescu. Of course the communists don’t like people to gather in groups because they are suspicious and feel that everyone is plotting against them. And they also don’t like principles like Truthfulness, Compassion, Forbearance.”

A teacher and her friend said they were meant to encounter the event because they hadn’t planned the walk in the park but decided to go there on the spur of the moment. They wanted to donate money so the practitioners could hold more activities. The practitioners politely refused, as the practice does not accept donations and is purely volunteer-based. They said the practitioners came to Baia Mare for the benefit of the city’s inhabitants and urged them to go to the schools to teach the children Dafa’s principles and exercises, thus giving the world a chance to change for the better. 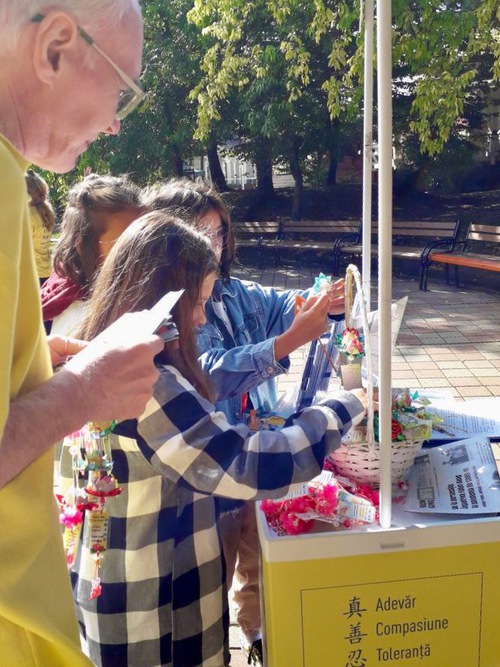 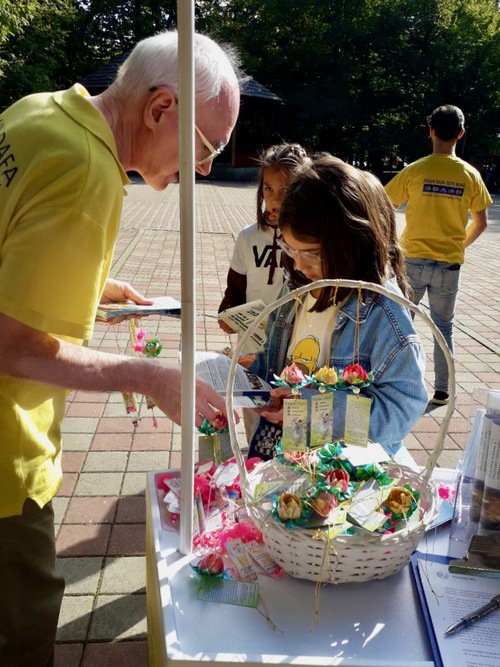 The girls came to ask for fliers and thanked the practitioners for visiting Baia Mare.

Many teenagers and others were happy to receive origami lotuses of different colors. They learned that the lotus is a symbol of purity. 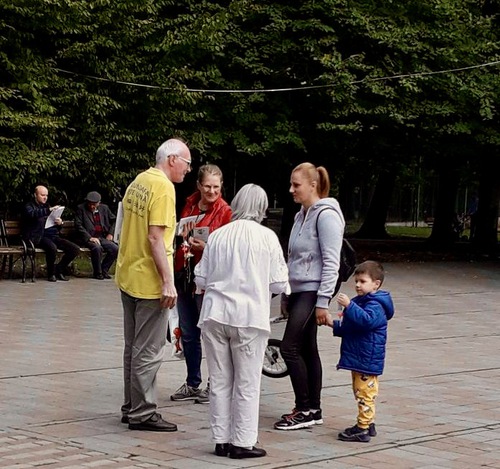 Falun Dafa practitioners raise awareness of the persecution in China near the Monument of the Romanian Soldier, near the Viorel Mateianu Municipal Stadium in Baia Mare, on September 26, 2021. 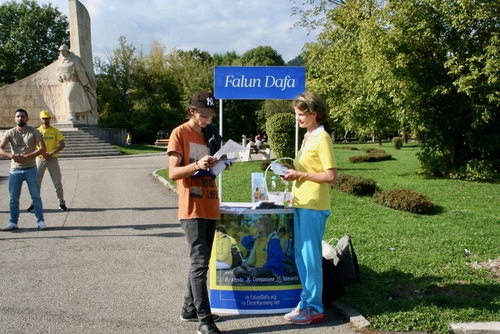 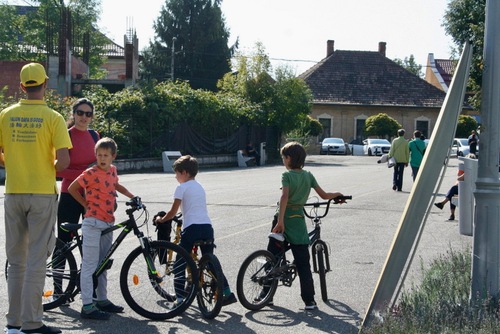 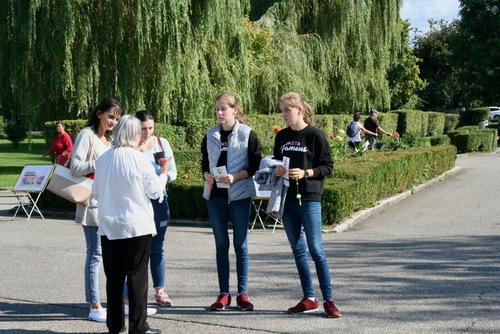 “Appeal Rejected, Heilongjiang Woman Taken to Prison to Serve a Seven-year Term for Her Faith”