(Minghui.org) Falun Dafa practitioners held truth-clarifying activities in front of the Nobel Prize Museum on October 8 and 9, 2021 in Stockholm, the capital of Sweden. 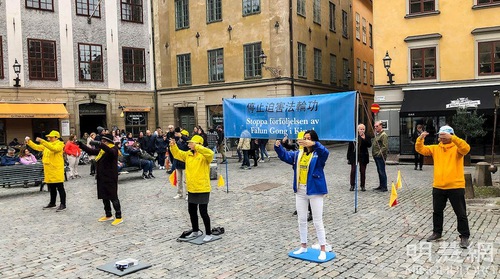 Practitioners demonstrate the Falun Dafa exercises in front of the Nobel Prize Museum in Stockholm.

Stockholm is the hometown of Swedish chemist, Alfred Nobel. The Nobel Prize consists of five separate prizes that according to Mr. Nobel’s 1895 will are awarded, “to those, during the preceding year, have conferred the greatest benefit to mankind.” The first prize was awarded in 1901. This year the Nobel Prize winners were announced from October 4 to 11, 2021. Many people around the world travel to Sweden during Nobel Prize week, so there was a never-ending crowd at the museum.

Practitioners set up truth-clarifying boards and information counters in front of the museum and demonstrated the exercises. Many people had some previous understanding about the Chinese Communist Party (CCP) and the true nature of communism. Practitioners’ exposure of the CCP’s genocidal persecution shocked local residents and tourists from around the world. A crowd formed around the information counter, and many times a line of people waited to sign the petition to condemn the CCP’s persecution. 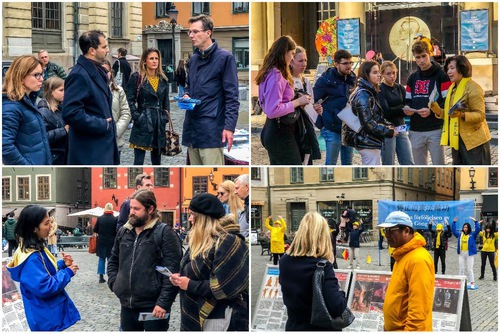 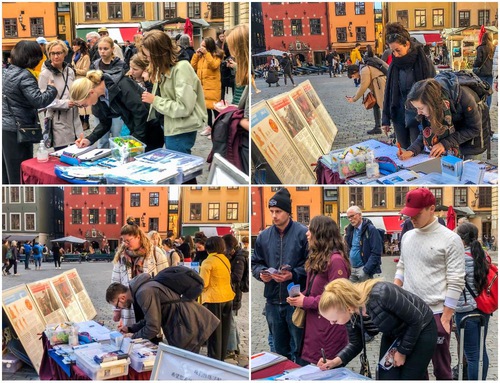 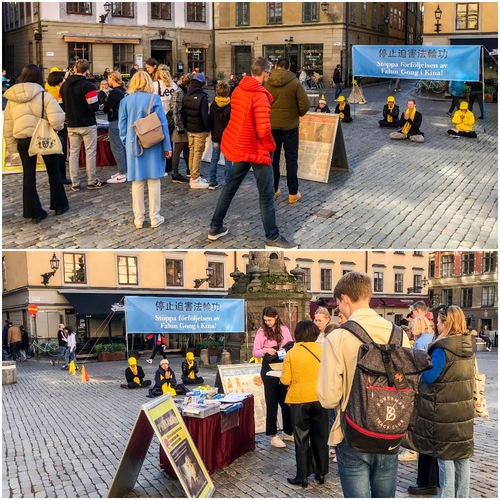 Local residents and tourists from around the world stop to read the truth-clarifying boards and talk with practitioners. Many people signed the petition to condemn the persecution.

It was the first time many people have heard about Falun Dafa and the CCP’s genocidal persecution of practitioners. Ms. Veronica, who lives in Stockholm, is one of them. 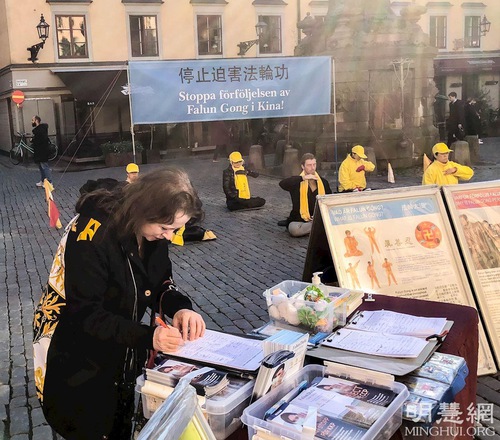 After Russian pianist Ms. Veronica signed the petition, she invited practitioners to join her in a discussion forum about the persecution, so that more people can know the facts.

Ms. Veronica smiled and said, “This wonderful (exercise) music attracted me to come over. I am especially sensitive to music.” Originally from Russia, pianist Ms. Veronica moved to Sweden more than 40 years ago. She said the exercise music captured her heart and the graceful exercises made her eyes light up. She stood in front of the demonstration area and excitedly conversed with a practitioner.

The practitioner told her about Falun Dafa and how the CCP persecutes it, including the regime’s state-sanctioned live organ harvesting atrocities in China. Ms. Veronica’s facial expression became solemn and she said in Chinese, “I know, I know.” She said that she had some personal experience with regards to communism’s violent dictatorship, so she understood why practitioners were there. Her musician father was persecuted by the former Soviet Union and was sent into exile for 10 years. Her entire family was persecuted by communist dictatorships.

After signing the petition Ms. Veronica said she was attending a discussion forum about the persecution carried out by dictators and invited practitioners to join her. The practitioners gladly accepted her invitation. She hoped that through this forum practitioners could clarify the truth in depth to many people, disclose the CCP’s persecution and expose their criminal acts of live organ harvesting. She hopes that more people can pay close attention to this matter and everyone can come together stop the persecution.

Friday, October 8, 2021, was the day prize winners were announced. A group of 5 or 6 people, who belong to a Swedish knitting organization, brought doves of peace that they knitted to the museum. They all stopped and watched the practitioners demonstrate the exercises and listened to them clarify the truth.

When they learned that practitioners were trying to be good people and abide by the principles of Truthfulness, Compassion and Forbearance, but were being cruelly persecuted by the CCP for 22 years, they were very touched. Not only did they all sign the petition, they even took out their doves of peace to present to the practitioners as gifts to express the Swedish people’s longing for world peace and that righteousness will prevail in the world.

Before they left, they happily accepted little lotus flowers, which came with the words ‘Falun Dafa is Good’ and ‘Truthfulness-Compassion-Forbearance is Good.’ They also took a group photo with practitioners to remember the occasion.

“Live Organ Harvesting Must Be Stopped”

“It’s true that live organ harvesting is going on in China,” a gentleman from Italy said after signing the petition, “I understood even more after reading all the display boards here today.” The man explained that he had a Chinese friend who told him before that if one has money, he can have a live organ transplant in China, but they are all done in private and cannot be spoken of publicly. They must be very careful, so they cannot write about such topics on WeChat or any other social media platforms. In China, everyone’s words and actions are being monitored by the police. If information about such matters is leaked out, the authorities will make sure that you disappear. The man was very angry and exclaimed, “The CCP is really evil. Live organ harvesting must be stopped!”

Not only did he sign the petition himself, the man took information that the practitioner was using to clarify the truth, walked over to his family and friends and explained what he heard about the criminal acts of the CCP towards Chinese people and everyone in the world. Afterwards, his family and friends signed the petition. He was happy and said that what Falun Dafa practitioners were doing was very meaningful.

Two ladies from Somalia were shocked when they read the information about the CCP’s live organ harvesting atrocities. One of them had tears in her eyes as she listened, “My whole mind and body were shocked. I did not expect that it would be so cruel. This is definitely intolerable!” She translated what was said to her friend in Somali. Both of them expressed their anger and signed the petition. Before leaving, they took some truth-clarifying flyers to distribute to their friends and family.

On Saturday, October 9, 2021, more people flocked to the museum. After Ms. Pauline from Ireland and her friend finished reading all the information on the display boards, they walked straight over to sign the petition.

She said, “I went to Beijing in 2018. While touring Tiananmen Square, I mentioned the students’ movement in 1989 to the tour guide, but he immediately changed the topic and did not allow me to mention this matter. Through this I personally experienced the fact that one does not even have the right to speak one’s mind in China, much less to say safeguard one’s rights.”

Ms. Pauline thought that the CCP always painted a false picture of peace and stability to deceive the whole world. She said that practitioners’ raising awareness about the persecution and exposing the CCP was very important. “This helped the whole world’s people know the true situation of China’s citizens under the CCP’s regime. This really deserves respect.”

Two students from Lund University lingered in front of the display boards and carefully read them. They seemed to have questions, so a practitioner began answering them, starting with what is Falun Dafa, why the CCP slanders the spiritual practice and brutally persecutes practitioners. He explained that the CCP performs live organ harvesting on Falun Dafa practitioners in China. He said that the regime fears that millions of Chinese will believe in Truthfulness, Compassion and Forbearance. After understanding the truth, they both sighed. One of them said, “I am really thankful to you for letting us know about such an important matter today. You all are really very great!” Both of them signed the petition and expressed their support for practitioners’ efforts to end the persecution. 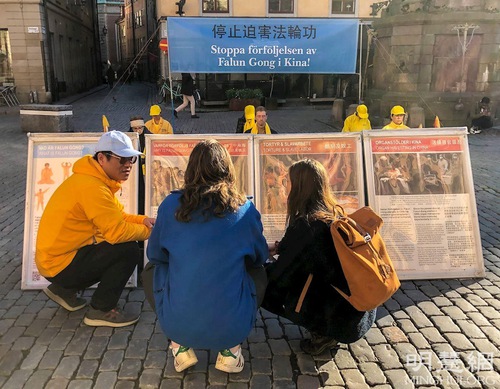 Two students from Lund University read the display boards for a long time. A practitioner (first on the left) explained why practitioners were holding activities.

After one Swedish middle-aged lady quietly signed the petition, she left and then came back. She introduced herself and said that she was a reporter and a translator for a newspaper in northern Sweden. She said, “I did not really know about the situation in China—people and Falun Dafa practitioners are oppressed by the CCP regime. Later, by reading about the CCP’s persecution and reports of Gui Min Hai, who is of Swedish nationality, I started to pay attention to matters related to the regime’s persecution of human rights.”

She thanked the practitioner who clarified the truth to her, “Your courage to stand here today, not for yourself, but for human rights and righteousness, really moved me.” She also encouraged the practitioners to persist and said more people will come to support their efforts to call for an end to the persecution.

“Eliminating the Persecution by Working Together”