(Minghui.org) The Falun Buddha Society in Singapore held a Nine-Day Falun Dafa Workshop from September 25, 2021 to October 3, 2021. New practitioners listened to Master Li Hongzhi’s lectures and learned the five sets of Falun Dafa exercises. At the end of the class, they shared their thoughts and feelings about the spiritual practice. 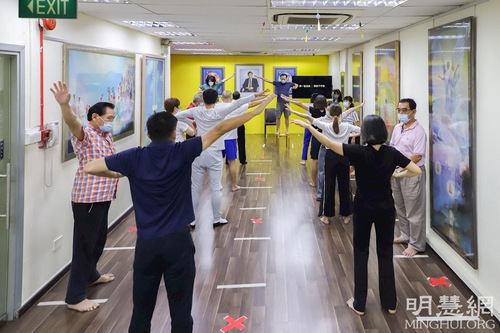 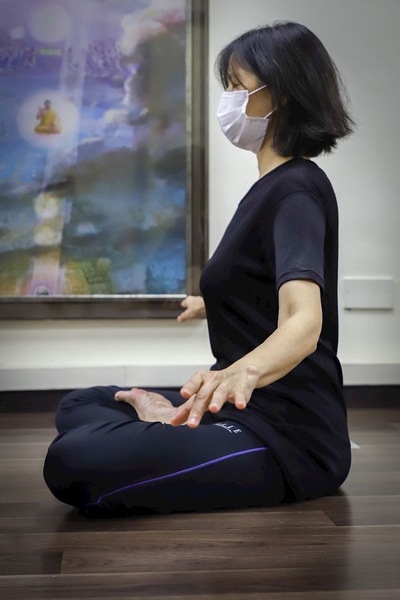 A new practitioner learns the 5th exercise, the meditation.

“Falun Dafa Is Another Spiritual Realm”

Jason said that he’d practiced all sorts of religions such as Buddhism, Hinduism, and Christianity for years. He said that when he was learning Falun Dafa, he heard a lot of new knowledge that he’d never heard from all the religions he practiced before. He said he was amazed and that Falun Dafa is another realm!

Jason also said that he felt that he was very healthy and nimble, but as age gradually caught up, he noticed obvious signs of aging. For instance, he was slow to recover after doing strenuous work. After attending the classes, Jason felt that Falun Dafa was very good. In just a few days he already felt his health improving.

“My Body and Soul Have Been Cleansed”

Sophia noticed obvious changes in her body after attending the classes. She said, “I feel that my body and soul are relaxed and cleansed. I will abide by the universal principles of Truthfulness, Compassion and Forbearance.” She also said that she plans to register for the next Nine-Day Falun Dafa Workshop.

Persisting in Practicing the Exercises and Feeling the Miraculous Effect

Ms. Chen said that her father and sister are Falun Dafa practitioners. In the past, she had a chronic cough but seeing a doctor and taking medicine did not cure it. The doctor said that it may be a gastric problem, so she went to a stomach specialist. However, the symptoms still did not subside. She tried many treatments but none of them worked. Finally her sister suggested that she practice Falun Dafa. After she learned the exercises, Ms. Chen quickly felt an improvement and felt that Falun Dafa was truly miraculous. When she heard that some of Master’s lectures were recorded, she listened to them. Whenever Ms. Chen feels concerned about her illness, she listens to Master’s lectures. Listening to them and sharing cultivation experiences and insights with fellow practitioners have given her more confidence in the practice.

Ms. Chen also encountered a test in her belief in Master. When she first started studying the Fa, she did not know if she should continue seeing doctors. Other practitioners told her that it was up to her. As she did not feel confident enough, she went for acupuncture, traditional massage treatment and physiotherapy three to five times a week. However, there was still no improvement.

She decided to persist in practicing the Falun Dafa exercises and gradually reduced these treatments. In the end, she got better and better. Now, she no longer goes for any Western or Traditional Chinese Medicine treatments anymore.

Mr. Lin, who was a national athlete, learned about the Nine-Day Class and brought his sick wife. When he was sharing his thoughts and experiences Mr. Lin said, “My attending these classes may be predestined.” He said that before coming to the class, he was not very fit. Afterwards, he felt improvements in his body and he no longer feels out of breath anymore.

The effects of the practice on Mrs. Lin’s health are even more obvious. Initially, she came with the objective of curing her illness but within just nine days, she said, “After attending the class for a few days, I no longer need to take strong painkillers. Now, I only take the lighter ones. I feel that this (Falun Dafa) is really good.”

“Henan Woman Sentenced to Prison for Her Faith”