(Minghui.org) Today's news from China includes incidents of persecution that took place in 21 cities or counties in 12 provinces, where at least 56 practitioners were recently persecuted for their belief. 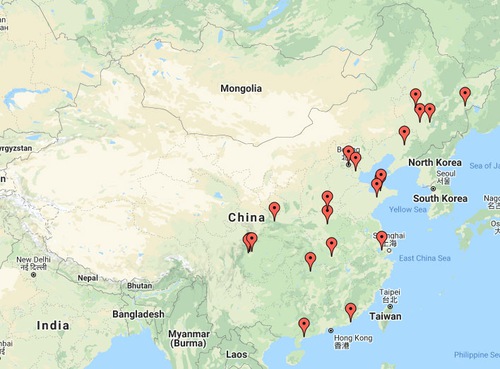 Ms. Cai Yuchang, in her 60s, was reported to the police for telling people about Falun Gong and distributing Falun Gong materials at noon on December 12, 2020. She was arrested and taken to the Waisha Airport Police Station.

The police took her keys and over a dozen officers ransacked her home that afternoon. They confiscated Falun Dafa books and printed materials.

Mr. Guan Zhongji, 65, was arrested at his son’s home in Qingdao City by officers from the Pingdu City 610 Office and the Renzhao Police Station in May 2018. He was taken to the No. 11 Ward in Jinan Prison.

Since December 2019, prison officials have prevented his family from seeing him. It was reported recently that Mr. Guan was brutally abused and was admitted to the hospital in October 2020. He had heart failure and is in critical condition.

To arrest Ms. Zhuang, the Longkou City Domestic Security Division mobilized a large number of people to search for her. Over a year later, they'd made no arrest.

The Longkou City Court offered a reward of 10,000 yuan via social media app Longkou on the Palm on October 22, 2020, for information leading to her arrest. The court also posted arrest warrants for her on her door and in nearby streets.

The court once again issued a notice for her arrest over the Internet on December 11.

Mr. Zhu Xiaoguang and Ms. Yang Li were arrested at home by four or five officers from the Hongqi Street Police Station on December 16, 2020. They confiscated Falun Dafa books. Mr. Zhu was released after 9 p.m. that night. Ms. Yang was still being held.

Ms. Yang’s cousin went to the police station the following afternoon and demanded her release. He was told that she had been placed under criminal detention and taken to the No. 4 Detention Center.

Ms. Zhang Xijun from Qili Village, Tianpeng Town, was reported to the police for talking to people about Falun Gong on December 15, 2020. She was arrested by officers from the Tianpeng Police Station. The officers ransacked her home and confiscated all her Falun Dafa books. She is being detained.

Officers from the Tianta Street Police Station and Residential Committee members went to Ms. Deng Jiying’s home several times between November and December 2020. They pressured her to sign statements. She refused. They threatened to lay off her daughter if she did not sign.

They then took official letters to Ms. Deng’s daughter’s place of work to harass her. As a result, her employer told her to go home and not to return for the time being.

This has put a great strain on Ms. Deng and her family. Her husband’s heart disease has gotten worse and their lives have been disrupted.

Ms. Lou Yahong was arrested by Dingzhuang Police Station officers on the morning of December 15, 2020. She is being held in the Yulin Detention Center.

Ms. Wang Qingmei was reported to the police for posting Falun Gong materials in Huicheng Garden on the morning of December 16, 2020. She was arrested and taken to the Huixian City Detention Center by officers from the Baiquan Police Station and Huixian City Domestic Security Division.

Mr. Ju Kaijiang, 70, was arrested at home in the Tianyuan Community in the Jingyang District, by officers from the Deyang City Police Department, the 610 Office, the State Security Division, and village officials on the morning of December 16, 2020. His current whereabouts are unknown.

Ms. Cai Jinrong and Ms. Jia Chungui were tried in the Jintai District Court on December 15, 2020. When Ms. Cai was brought into the courtroom, her family saw that she was very weak, had difficulty breathing, and hardly had the strength to speak.

Several practitioners, including sisters Xiaowen and Xiaofan, were arrested on December 16, 2020.

Ms. Ji Guizhen was tried in the Wujiang Court on August 11, 2020. She was recently sentenced to a three-year-and-three-month prison term and fined 3,000 yuan.

Officers from the Zhihe Police Station and community personnel went to the entrance of Ms. Zhang Fuzhen’s building and called her husband on December 10, 2020. He did not let them come upstairs.

When he went down to the entrance, the officers told him to sign a form verifying that Ms. Zhang “has stopped practicing Falun Gong.” They threatened to take Ms. Zhang to a brainwashing center if he did not sign. Ms. Zhang’s husband, who is not a practitioner, signed the form.

Director Yao of the Changshou Community on Hanzhong Street and someone responsible for monitoring Internet content told Ms. Huang Yongmei to go to the community office on November 9, 2020.

They ordered her to make a statement that she would give up practicing Falun Gong and threatened to take her to a brainwashing center if she did not. Ms. Huang refused.

Her niece later picked her up. The director of the residential committee still calls to harass her every few days.

Officers from the Longfeng Town Police Station broke into Ms. Hu Guofen’s home, harassed her, and ransacked the place on December 11, 2020.

Mr. Huang Zhufeng was arrested by police officers waiting downstairs in his apartment building on December 12, 2020. They then called in more officers from the Zhanqian Police Station, who ransacked his home.

Mr. Huang’s wife Ms. Xie Yuezhen and their son were also arrested and taken to the police station for interrogation.

Three officers from the Mishan City No. 1 Police Station broke into 77-year-old Ms. Ding Guiqin’s home on December 17, 2020. They asked if she had Falun Gong materials at home and started taking pictures. Ms. Ding stopped them.

Officers from the Mishan City No. 3 Police Station went to Ms. Shuai Yujuan’s home and ransacked the place on December 17. Her current situation is unknown.

Over 20 practitioners, including Ms. Li Shuping, were tried via video link by the Heping District Court on December 16, 2020. No family members were present, but lawyers were there and defended their innocence. The court has not yet announced the verdict.

Mr. Zhou Guoqing, Mr. Zhang Bo, Mr. Xiong Youyi, and Mr. Li Jun will be tried in the Wuchang District Court on the afternoon of December 24, 2020.

Ms. Guo Xiaoxia is missing, and practitioners who were often seen with her are also missing. Details are pending.

Mr. Peng Lekuan was taken to the Quanshan police station by plainclothes officer Guo Yucun for talking to people about Falun Gong at Wenquan Park on August 6, 2020.

At the police station, his family pressured him to sign statements. Prosecutor Liu Yanxia submitted the case to the court. Judge Wang Chundong issued a subpoena on December 3, 2020, notifying Mr. Peng to report to the court.

“Put Faith in Master and Dafa”