U.S. Secretary of State: “The True Face of the Chinese Communist Party Has Been Exposed”

(Minghui.org) In an interview with American Thought Leaders on The Epoch Times, U.S. Secretary of State Mike Pompeo said that religious freedom is at the center of every civilization and when that goes wrong, bad things will emerge. He called on the world to “keep up this drumbeat demanding simply that the Chinese Communist Party permit people to exercise their God-given rights to practice ... their faith in the way that they so choose.” 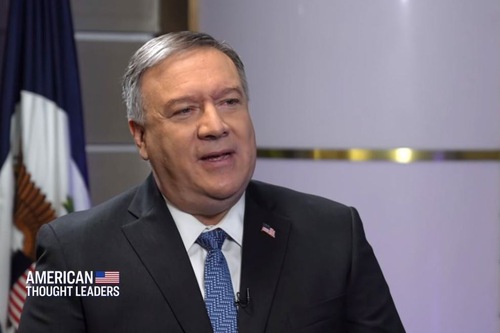 Secretary Pompeo said, even though the world’s people know the authoritarian nature of the Chinese Communist Party (CCP), they ignored it, partly because previous foreign policy makers believed that economic trade and engagement could make the CCP “engage at least externally in the world on a fair and reciprocal basis,” only to find that the idea was “patently false all the way through” decades later.

Pompeo believes that “the resistance from lots of quarters was enormous for a host of reasons,” including economic reasons and others.

He noted that President Trump recognized the CCP problem even during his campaign. After he took office, he led a major change in U.S. foreign policy. “We’ve now changed fundamentally how I think the West looks at China, not just the United States. Even when you look at Europe, Australia, and South East Asia, they know too. They know that the Chinese Communist Party is up to no good,” Pompeo said.

Secretary Pompeo also recognized that many of the voices from Chinese dissidents “ringing the bell” about the CCP threat were overlooked, and policy makers were distracted by other challenges as well, including a very important counterterrorism campaign.

“We took our eye off this enormous threat and now – it’s now upon us. It’s now inside the gates. The Chinese Communist Party is here in America and the Trump Administration has begun in every dimension to turn the ship in the right direction to get America to once again do the right thing and protect itself from this Communist threat in China.”

Religious Freedom at the Heart of Every Civilization

Pompeo added that religious freedom is “at the center of every civilization, this idea that human beings have inherent dignity because of their humanness. And if you get that piece wrong, bad things flow from that. So we under President Trump’s leadership have focused on religious freedom not just in China but elsewhere, but particularly with the Chinese Communist Party.”

He continued,“We’ve seen what they’re doing to the Uighurs in the western part of the country. We’ve seen what they’ve done to Tibetans. We now see them doing the same thing to other ethnic minorities including the people in Mongolia in the north part of China and then Christians throughout the entire country ... these things that are fundamental affronts to human dignity are something that is a hallmark of authoritarian regimes.”

He also said, “General Secretary Xi Jinping is no different. He knows that he has to extend ever-increasing power and control in order to maintain his capacity to rule.”

Pompeo said in his role as Secretary of State, he appreciated the opportunity to meet with and talk to people who were persecuted or had their families persecuted, which “has been a wonderful personal experience as well to see these noble amazing people who simply want the capacity to exercise their own conscious rights.”

He said he is proud of his work in the State Department. “I’m proud of what President Trump and our administration have done. And I am confident that the world will keep up this drumbeat demanding simply that the Chinese Communist Party permit people to exercise their God-given rights to practice, and not practice, their faith in the way that they so choose.”

Pompeo noted that at the State Department, it’s very important to separate the concept of the Chinese people and the Chinese Communist Party.

He explained that China is a country with a lot of history and dynasties. “The history of this place is long and storied, and the people who occupy this place are good people.” But it’s only after the Chinese Communist Party came in, the Chinese people began to “live under the jackboot of an authoritarian regime that denies them the capacity to grow their families. For the longest time, they were denied the capacity even to have children in the way that they wanted to. There was selective abortion taking place. Some of the greatest tragedies of civilization of the last 50 years have taken place inside of China.”

He added, “It’s not the people driving that (tragedies). It’s these leaders who are stealing money, driving state-owned enterprises to do things that are disconnected from the way the world ought to operate, and denying – while lifting some folks out of poverty, to be sure, denying the basic political freedoms that every human being is entitled to.”

“And so I admire the Chinese people. I am confident that the Chinese people want a different path forward. They want their freedoms, and it is the Chinese Communist Party denying them. But it is important to keep them separate. We have – there are great Chinese people who live all across the world, including here in the United States of America. We want to honor them and we admire them, and we hope that they too will join the call to change the nature of how this regime behaves in its international activities,” he said.

Seeing the True Face of the Chinese Communist Party

Pompeo said he believes that “Americans are now more attuned to this threat. For a long time, America’s leaders denied that this was taking place, so I think people couldn’t see it or feel it, or their leaders were telling them, no, it’s okay if they steal millions of jobs from people in Kansas or Iowa who invented something, or they steal some technology invented in Silicon Valley or in the Boston Corridor. American leaders said, that’s okay, we’re going to go make a pretty penny; don’t worry.”

But, he emphasized, “those days are gone.” In particular, the way that the CCP handled the coronavirus pandemic has led the world’s people to see “the nature of the regime up close.” There are also polling data showing people’s negative impression of the CCP. And more importantly, as he traveled the world and interacted with people, Secretary Pompeo has seen changes in perception worldwide.

“I think they understand the nature of this regime in ways that they didn’t three, four, or five years ago. I think we are in part responsible for that. But no one’s going back. No human being who can see – whether they’re in Indonesia or Vietnam or Singapore, no one’s going to go ever acknowledge again that the Chinese Communist Party isn’t up to no good. They see it. They see it plainly,” he said.

Standing Up to the Chinese Communist Party

When asked about the recent treaty between the European Union and China, Pompeo said that he isn't opposed to fair and equitable trade, instituted on a reciprocal basis. But for the past 50 years, both the U.S. and the world have granted exceptions that the CCP asked for, whether it’s about national security policy or a set of trade rules at the WTO.

“We cannot permit – we can’t continue to bend a knee to the Chinese Communist Party in the way that we have for 50 years. They will take advantage of that. They will do what General Secretary Xi Jinping says he wants to do. So they will create a hegemonic capacity to have vassal states all across the world. That’s not tolerable.”

Another challenge the U.S. is facing is the 300-plus thousand Chinese students coming here every year to study. Pompeo said that it’s a good thing for these young minds to come here and be exposed to the West. But sadly, many of these students have been turned into spies by the Chinese Ministry of State Security and the People's Liberation Army. Now, the U.S. government has rejected a few thousand of such operatives after identifying them. A large number of Confucius Institutes have also been closed, after “calling them out for what they are.”

Protecting the U.S. Against the CCP

In the last part of his interview, Pompeo said that after the pandemic, people have begun to see how corrupt the CCP’s institutions are and how their state-owned enterprises compete in ways that people hadn't fully recognized even a few years ago.

“So you have begun to see supply chains shift to other places. I think there is a deeper recognition amongst the business community today of the political risks of operating inside of China in ways that there weren’t two or three years ago."

Pompeo said that during his six years as a Congressman and four years in the Trump administration, every experience he's had suggests that “anything but distrusting anything that comes from the Chinese Communist Party is folly.”

“Time after time after time. The Chinese Communist Party promises that if they have a virus problem that they’ll disclose it. The list is endless. They still, to this day, haven’t allowed the World Health Organization to begin its investigation of where this virus emanated from, and yet they promised they would.”

Talking about whether the CCP has interfered with the U.S. general election, Pompeo commented that he can’t say much, and he trusts that the intelligence community would do their job and publish a report as appropriate. At the same time, he emphasized that the American people should be aware of the all-around presence of the CCP, including in schools, clubs and civic organizations.

“The Chinese Communist Party clearly lobbies hard, works hard, they have consulates across America where their diplomats are engaged in behavior that’s inconsistent with what we’re supposed to do as diplomats. We shut down one of them because we – it was very clear that they were running a spy operation out of the consulate in Houston.”