(Minghui.org) Practitioners continued to introduce Falun Dafa and expose the Chinese Communist Party’s (CCP) persecution on Mynttorget, a square near Sweden's Royal Palace, on Saturday, January 2, 2021. They demonstrated the exercises, set up posters and collected signatures.

Sweden’s prevention policy regarding the coronavirus pandemic has been relatively loose. As the snow melted, people came out to enjoy the warmer weather. Some read the posters, while others watched the exercise demonstration or talked with practitioners to learn more. Many signed the petition calling for an end to the persecution. 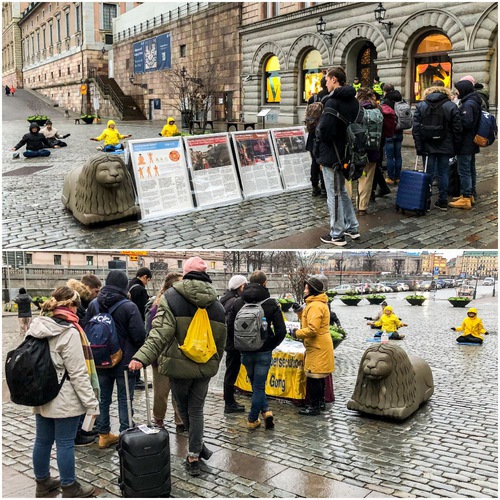 Practitioners introduce Falun Dafa and expose the CCP’s persecution during activities on Mynttorget on January 2, 2021. 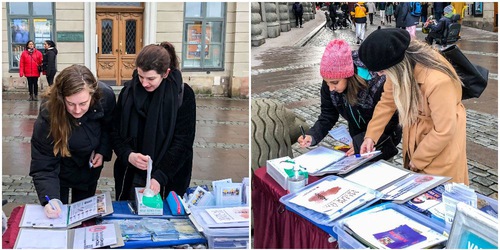 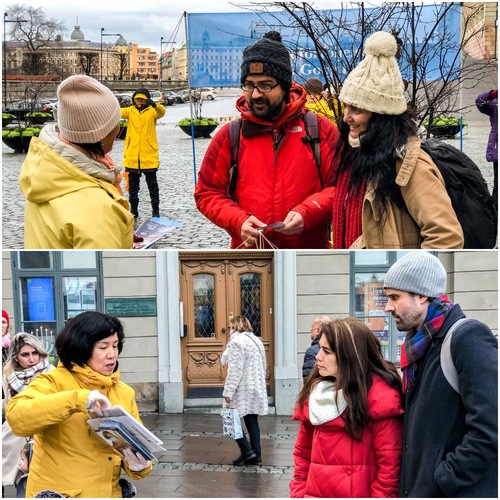 Rort, a professor in the Department of Music in a German university, was happy to learn about Falun Dafa. He and Astrid came from a district in Germany with the strictest pandemic prevention policy.

Astrid wished to have a group photo with the practitioners. She said to Rort, “Let’s take photos of the posters and pictures. We can help spread the information.” They signed the petition without hesitation after learning about the CCP’s persecution and its state-sanctioned organ harvesting from living Falun Dafa practitioners.

“Stay away from the CCP and disintegrate it,” Rort said. “The Party is the source of all these persecutions. The CCP persecutes religions and interferes with other countries’ affairs. What you are doing here is right. We support you.”

Rort also told the practitioners that he and Astrid planned to do a social survey. While talking about this, he said, “Actually, the CCP infiltrates other countries a lot. It's spreading its surveillance network throughout the world via Huawei 5G and other technologies.”

Rort talked about the pandemic and felt that the coronavirus originated in China. The CCP manipulated the WHO (World Health Organization) and covered up the initial outbreak, allowing the virus to quickly spread across the world.

“In fact, this virus cannot be stopped by the current epidemic prevention measures,” he said. “If a person does not have a strong inner kindness and conviction, just wearing a mask will not solve the problem.

“The world is chaotic now, including the US presidential election. Anyone with a little bit of sanity can see that there was serious fraud in this election. But so many media just turn a blind eye. President Trump is unwilling to collude with the CCP and he blocks their interests, so those people hate Trump.”

He thought that kind people in the world should speak up, “If kind people keep silent, our world will be finished.” He left his contact information before leaving. 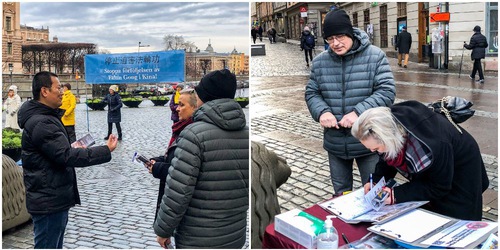 Katarina signed the petition after talking with a practitioner.

Katarina talked with the practitioners for a long time and was very sympathetic. She said, “I often see you collecting signatures here. This persecution is so evil and has been going on for more than 20 years. Yet the Swedish government and the international community do not express concern. Too many people are indifferent.”

A practitioner said, “Every signature is important. This is a call from kindhearted people who condemn the CCP’s brutality and to stop the CCP from continuing to commit crimes.

“If everyone chooses to remain silent, the CCP will trample on human rights even more brazenly. However, if everyone speaks out for justice, their power will be unstoppable. Then the world will be bright.”

Katarina felt the practitioner made sense and said, “It seems every signature is important. Righteous people are unstoppable. I must sign.”

The CCP Is a Demon

A Tibetan man from Indonesia was happy to see so many people waiting to sign the petition calling to disintegrate the CCP. Pointing to the words “Truthfulness-Compassion-Forbearance” on a Falun Dafa flyer, he said, “These three words are very good. I know very well why the CCP is so afraid because these words expose the Party’s lies and violence. You are doing well to let more people know what is occurring in China (live organ harvesting).”

He continued, “In fact, the CCP is a demon. The people in China are under the CCP regime's control. The CCP’s lies deceive the Chinese people and the whole world.”

He thought that the practitioners’ awareness raising was great to awaken people and help them see the CCP’s lies. He called on people across the world to unite to eliminate the CCP.

“Refusing to Cooperate in the Persecution”