(Minghui.org) Today's news from China includes incidents of persecution that took place in 22 cities or counties in 10 provinces, where at least 43 practitioners were recently persecuted for their belief. 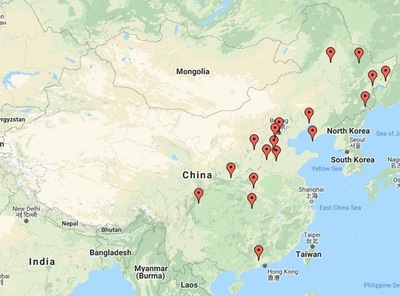 From December 16 - 18, 2020, officers from the Mishan City Police Department and various police stations harassed or arrested eleven practitioners. They ordered the practitioners to write the three statements.

Mr. Luo Libin was arrested on December 16, 2020. His home was ransacked. The details are not yet known.

Ms. Guo Xiuyan from Taiping Township was arrested at home around 8 p.m. on December 16, 2020. Her home was ransacked. She was taken to the Mishan City Domestic Security Division and was forced to sign the three statements. She has now returned home.

Ms. Xin Lilian was harassed at home around 4 p.m. on December 17, 2020, by officers from the No.1 Police Station who claimed to local community staff members. One of the officers broke into her home through a window after Ms. Xin refused to open the door. They ransacked her home and took away more than ten Dafa books. Ms. Xin was taken to the police station but she still refused to sign the three statements. She was released later.

Mr. Chen Hongrui from Mudanjiang Agricultural Reclamation Bureau, was harassed at home in Beidaying, Mishan City by three plainclothes men with face masks. They inquired about calendars which had truth-clarifying information.

Wu Yongxia (gender unknown) was taken away around 8 p.m. on December 17, 2020 by local police. The details are unknown.

Ms. Zhang Shuqin from Yimei District was sentenced to three years and four months in prison. Currently, the case is under appeal.

Ms. Guo Yuying was sentenced to two years in prison; Ms. Liu Xinglan to one and a half years; Ms. Sun Dexiang to four and a half years. All three women have been taken to Harbin Women’s Prison.

Ms. Zeng Youmei from Dongchangfu District was arrested on February 1, 2020, by Zhou Shengqiao, head of the domestic security division, and officers from the Gulou Police Station. Her home was ransacked. She was informed by Dong’e County Procuratorate on September 23, 2020, that she would face a trial within one or two months.

It was learned in October 2020 that Ms. Zeng Youmei was sentenced to four years in prison. She appealed to the Liaocheng Intermediate Court. According to the final judgment she was to serve the four year sentence on bail.

Ms. Zeng Youmei's sister is also a practitioner. She has sequelae of cerebral infarction and has difficulty walking. She was sentenced to three and a half years.

Mr. Li Jian lives at Zhongshan University in Guangzhou City. He was arrested on November 5, 2020, for distributing truth-clarifying materials on campus. Officers from the Haizhu District Police Department and the Xingang Street Police Station ransacked his home. They took away his printer, computer and truth-clarifying materials. Mr. Li Jian is currently detained in the Haizhu District Detention Center.

Chen Ying (gender unknown) from Fuyu County was arrested at the rented apartment in Chuangyecheng Community of Daqing City on December 16, 2020.

The cases against Mr. Ren Haifei and Ms. Sun Zhongli have been transferred to the Ganjingzi District Court. Mr. Ren Haifei’s lawyer went to the court on November 17, 2020 to view the case file but was obstructed by Judge Jin Hua.

Ms. Wang Xiaofen was arrested on the afternoon of September 19, 2020, by officers from the Julun Police Station in Xinghualing District when she clarified the truth on the street. Her home was ransacked. Many personal belongings were taken away including more than 60 books, cell phone, laptop, printer, etc. Ms. Wang is currently detained in the No.4 Detention Center. Her case has been transferred to the procuratorate.

Ms. Wang Xiuying's daughter received a harassment call around 4 p.m. on November 7, 2020, from Zhao Danhong who works in the retirement office of Xi’an Jiaotong University. Zhao threatened to send Ms. Wang to the brainwashing center if she refused to sign the guarantee statement.

Ms. Wang’s daughter received a harassment call again around 10 a.m. on December 11, 2020, from Zhao Danhong, who told her daughter to stop by the Taiyi Road Office in Peilin District. She refused.

One hour later, around 11 a.m., Ms. Wang’s daughter received a harassment call from the Taiyi Road Office. Police officer Liu requested to have an appointment with her the following Monday at Xi’an Jiaotong University and pressured her to sign the guarantee statement on behalf of her mother.

Ms. Wang’s daughter received a harassment call from the Peilin District Police Department around 4 p.m., December 14, 2020, and was requested to have a talk. After she refused, they threatened to come to her home once a week during 2021.

In early December 2020, Ms. Xu Wangxiang was arrested by officers from the Baiquan Police Station in the Yanqing District. She is currently detained in the Changping Detention Center.

Ms. Xu was arrested and detained for 15 days two months ago. She was released on bail. She was arrested again this time because her case was transferred to the procuratorate.

Ms. Meng Fanqin was arrested at home on December 15, 2020. Currently she is detained in a brainwashing center in Yanji City.

Mr. Li Suwen has been repeatedly harassed since September 2020. The harassment was directed by Ran Guangming, deputy of No.854 Farm Party Committee. His former colleague Li Zhengwen and others tried to persuaded him to sign the three statements. Gao Cheng and Zhao Pu from the Comprehensive Management Office of No. 854 Farm kept harassing Mr. Li’s daughter and threatened her job. Even Mr. Li’s parents-in-law in their 90s were called to advise him. Mr. Li rejected all the harassment and did not sign the three statements.

Ms. Liu Zhangcai in Hongyan Town was harassed around 1 p.m. on December 16, 2020, by four people including Zhang Luqiong and He Qing. She was told not to walk around or call anyone. She refused to cooperate.

Ms. Yuan Guifang was arrested on the morning of December 17, 2020, by police officers from the Dingxing Domestic Security Division.

Mr. Li Xingjun, Mr. Zhang Jingzhou, Ms. Sun Jiangyi, and Mr. Lei Yunbo have been detained in the detention center for 16 months. Chen Shunying has been detained for 13 months. Ms. Deng Tianyu is also under custody. Mr. Liu Shehong from Wuhan City and Ms. Zhao Xiujuan have been sentenced to prison. It is unknown where they are detained.

Ms. Wang Xiumei was harassed at home on December 8, 2020. Liu Zhiqiang, deputy director of the Security Department, No. 4723 Naval Plant in Yongnian District, and three police officers came to harass her. Ms. Wang did not let them into the room. They videotaped the whole process.

Ms. Liu Xia from Linghe District was reported to police and arrested on the morning of December 13, 2020, for clarifying the truth and distributing Falun Dafa keepsakes at the Shiqiaozi morning market. Her home was ransacked around 1 p.m. Her Dafa books and Minghui Weekly booklets were taken away.

Ms. Mao Dejun, a 66-year-old retired physics teacher, was arrested on August 11, 2020. She was tried by the Linshu County Court on December 1, 2020, and sentenced to one-and-a-half years a week later.

Ms. Shi Guizun, 76, was arrested at home on the evening of July 26, 2019. The police ransacked her home and took her to the Jiamusi City Detention Center. Her family recently learned that she has been sentenced to two years by the Xiangyang District Court. She was imprisoned in the Heilongjiang Province Women’s Prison on September 24, 2020.

Ms. Lang Gaiqin, 68, was arrested on September 9, 2019, only one day after she returned home from years of displacement to avoid the persecution. She was later sentenced to seven years by the Huixian City Court. Her appeal was rejected by the Xinxiang City Intermediate Court. She was recently taken to the Xinxiang Women's Prison.