Taiwan: Practitioners in the Central District Express Thanks to Dafa's Founder

(Minghui.org) On January 17, 2021, Falun Dafa practitioners from districts and counties in the central part of Taiwan, including Taichung, Zhanghua, Nantou, Yunlin, and Chiayi gathered at Yuanzhang Primary School in Yunlin to hold their bi-monthly group Fa study. With Chinese New Year just around the corner, they took the opportunity to express gratitude to Master Li Hongzhi, the founder of the practice, and wish him Happy New Year!

The practitioners reflected on their cultivation and how they applied the principles of the teachings – Truthfulness, Compassion, Forbearance – in their daily lives. Not only did their health improve through practicing Falun Dafa, they also feel that the elevation of their moral character has had a positive impact on society. Many talked about the benefits they've received from the practice and expressed joy at becoming practitioners.

Susan, who lives in Taichung, began to practice Dafa in early 2009. She previously had severe insomnia and had lost a lot of weight for no apparent reason. She consulted both Western and Chinese medicine doctors but they could not find the cause of her ailment. On top of that, her son, who was in primary school, suddenly began having severe backaches. The pain was so bad that he rolled on the ground. They tried everything to help him, but nothing worked.

On one occasion, Susan went to the mountains and met a Falun Dafa practitioner doing the exercises. She asked about Dafa and learned that the practice was not only about doing exercises but was guided by teachings. She searched online for a practice site nearby and began to practice Falun Dafa.

The practitioner who introduced her to Dafa was a doctor, but he did not tell her about the health benefits. He only said that the practice taught people to improve their moral character, and invited her to attend a nine-day introductory class. Susan took her son to the class. Soon afterwards her health improved. She recovered from her insomnia and chronically cold limbs without taking medication.

Before she began practicing Dafa, Susan felt that her life was hopeless. She described finding Dafa as if a divine being had extended a pair of warm hands and given her hope.

Her son also recovered from his backaches as a result of practicing Dafa. Calling it a miracle, Susan recalled, “One time, we were doing the exercises outdoors with other practitioners. My son struggled with the second exercise due to his backache. A practitioner encouraged him to persist. He did, but after the exercises, his hands were covered with a rash. He was terrified. Practitioners told him to treat it as a good thing. The rashes disappeared gradually and his hands returned to normal. From then on, my son never suffered from pain in his back again.”

Susan is grateful to Master Li for giving her good health. “Although I haven’t been practicing cultivation solidly, Master did not give up on me. I hope to do the three things well to repay Master for all he has given me.”

A “Magic Pill” for Keeping Calm

“Since I was a child, I kept asking myself, what am I living for? What is the meaning of life? After learning Dafa, I realized this is what I have been looking for,” said Qionghui, a teacher at Jianguo Middle School in Yunlin. She began practicing Falun Dafa 16 years ago but did not realize how valuable it was and therefore did not practice cultivation diligently.

Six years ago, her marriage hit the rocks and she developed health problems including cold limbs and uterine fibroids. She thought of Falun Dafa, and she felt it was a “magic pill” for keeping calm. She started to seriously read the main book Zhuan Falun. She also started to do the exercises outdoors with other practitioners. Bit by bit, her health and character improved.

When Qionghui took the practice seriously, she discovered that Zhuan Falun was unlike any other book. “It has profound meaning yet the teachings are in simple language. It makes me want to keep reading it. I am a better person and my health problems miraculously disappeared,” she shared. 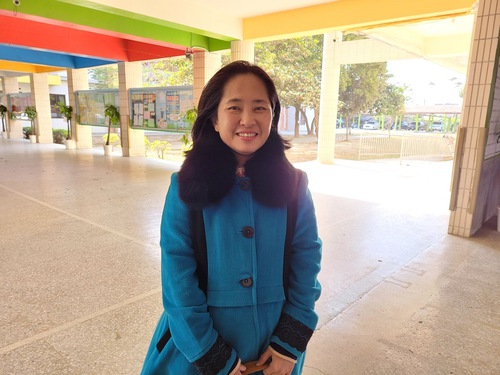 Qionghui, a teacher in Yunlin, credits Falun Dafa for changing her life.

“My life has changed tremendously since I began to practice Dafa diligently. Family relationships are more harmonious and I get along better with my co-workers,” she said.

Qionghui thanks Master for giving her a wonderful life and the ability to clearly see what's important. She wishes Master a Happy New Year.

Learning to Get Along with In-Laws

Gu Minghui, a teacher at a primary school in Taichung, has been practicing for 16 years. She is grateful to Falun Dafa for improving her relationship with her in-laws. She lives under the same roof as her in-laws so she had to adapt to their lifestyle. This caused her a lot of stress. Her mother-in-law wants the house to be cleaned in accordance with her standards. In the beginning Minghui felt she was treated unfairly and developed resentment, but she knew she should follow the principles of Truthfulness, Compassion, Forbearance. She told herself to let go of negative thoughts and try to treat her mother-in-law well. 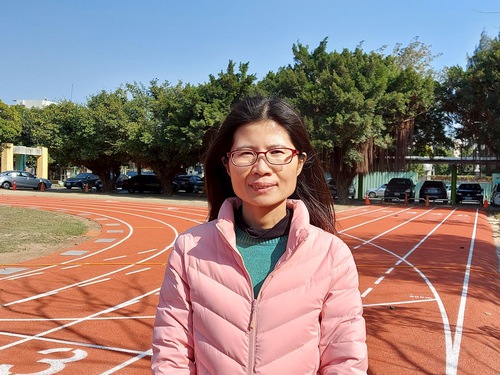 Gu Minghui, a teacher, is grateful to Falun Dafa for helping her improve her relationship with her mother-in-law.

Gu Minghui tried to meet her mother-in-law’s demands in every way and in the process she learned to let go of her human notions, as well as change her habits. She discovered that she became more relaxed and felt at ease with her mother-in-law.

Those around her noticed her transformation. Her husband said to her gratefully, “Only you could do it.” He told his mother that such a daughter-in-law only comes about in one hundred years. Her father-in-law praised her and said, “Falun Dafa is wonderful!” He often praises her to others.

Gu Minghui said her family members realize that Falun Dafa is good through her actions, and they support her in her faith. She said, “Now, when I go out in the morning to do the exercises, my mother-in-law opens the door for me and closes it after I leave. I feel very blessed.”

Wang Yuqing, a teacher, has only practiced Falun Dafa for one year. She feels that Falun Dafa has improved her physical and mental wellbeing tremendously. For ten years she had pain and numbness in her legs caused by a slipped disc. A few months after she began practicing, the symptoms disappeared. She said that she is able to think of others and do more for them. In the past, she used to carry out her responsibilities at work with the attitude of “doing only what's required.” Now she takes on the tasks that co-workers don’t want to do. She said that afterwards she feels wonderful. 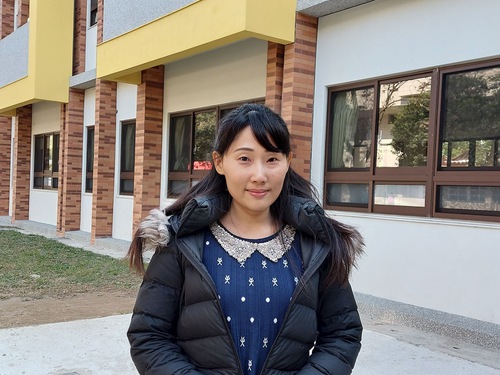 Wang Yuqing's students have benefited from the practice as well. Realizing that helping her students understand the principles of the universe is the best form of education, she incorporated what she learned from the main book Zhuan Falun into her students’ moral education. To her joy, she discovered that it was a great boost to nurturing her students' character. She tells her students that if they take advantage of others, they will repay it in some form. Her students learned to examine their behavior and have become considerate of others. Some of them even learned to control their tempers.

Chao Chuan had searched for a spiritual practice since he was young. He tried many different teachings and finally found Dafa through a brochure in 2000.

Realizing that this is a genuine spiritual practice that is hard to come by, he gave up the things he'd learned in the past and decided to only practice Dafa.

Chao Chuan experienced spiritual progress after he began practicing. “Truthfulness, Compassion, Forbearance appear to be three simple words but they have profound meaning. When you put them into action, you will discover the power of Dafa,” he said.

“Previously, when my wife and I have a different opinion on something, I would behave like a male chauvinist and insist on her following my view. As a result, my home was tense. After I began to follow Master's teachings, I learned to put others before myself and things are resolved peacefully. Things go smoothly at work as well.”

Chuan is very grateful for the opportunity to practice Falun Dafa.

Dafa Has Made Me Become a Truly Good Person

“I always regarded myself as a good person, but I thought I was very capable and made others follow my standards,” said Huang Keli, 56, who lives in Yunlin. Before retiring, he was a manager in a government agency. After he became a practitioner, he realized that he was far from being a good person. He gradually learned to be considerate of others and humble. His tone of speech became more gentle and he was more patient. “Friends and family comment that I have changed,” he said. 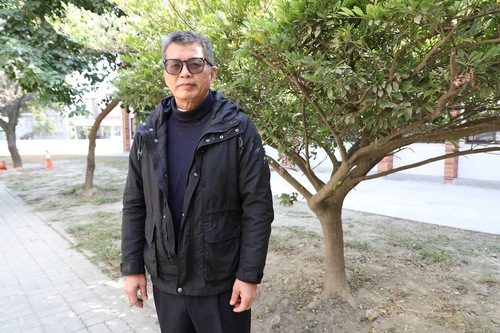 Huang Keli who worked in a government agency before retiring, said that Falun Dafa turned him into a truly good person.

“As a child, my parents and elders doted on my older brother while I was treated very differently. I often wondered if I had been adopted. I developed resentment, jealousy and suspicion,” Mr. Huang said. “After learning Dafa, I understood that relationships with people are the result of past karma. I was able to quickly let go of my feelings of unfairness and I became more forgiving.”

Cai Yugong started to practice Dafa in 2003. She said, “When I read Zhuan Falun, I knew this was what I was searching for. I strive to follow the teachings and regard everything as a good thing.” 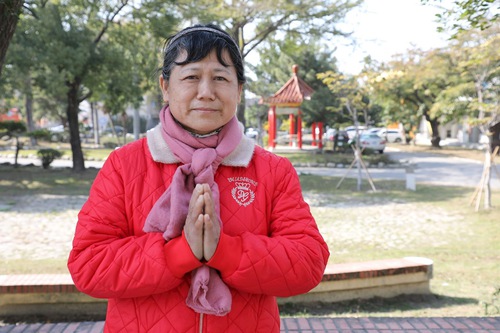 She had a car accident in 2013. She was riding a motorcycle home when a car hit her. The impact was great and the car was severely damaged. She was tossed into the air and landed in a ditch. The ambulance came and was going to take her to the hospital. Her mind was blank at first. She wasn’t in a lot of pain and her first thought was that she was fine. She went home.

The driver who hit her came to see her at home several times. She told him not to worry, as she did not intend to seek compensation. At the time, she could not stand straight, and could not put her weight on left leg. However, within a month she recovered. “I knew Master protected me. I regarded myself as a practitioner and everything turned out well,” Yugong said.

“Recently, my son’s new motorcycle was stolen. I told myself perhaps I owed that person a debt in a previous life and this was repaying the debt.” She feels that there are ups and downs in life. Practicing Dafa has made her heart steady, calm and carefree. She thinks her purpose in life is to practice cultivation and she tries to seize the time to practice diligently.

Falun Dafa is practiced freely in Taiwan and all around the world. Since July 1999, however, the practice has been severely suppressed by the Chinese Communist regime in China. Countless practitioners have been imprisoned, tortured to death and an unknown number have had their organs removed without consent.

As the global pandemic spreads, practitioners in Taiwan cherish the opportunity to gather and do the exercises, study the teachings and share experiences in cultivation. They hope more people will realize the benefits of Falun Dafa and condemn the persecution in China.

“After Repeating the Same Mistakes in Thousands of Years, Will Mankind Eventually Learn a Positive Lesson?”