(Minghui.org) Falun Dafa practitioners in Auckland participated in the Kumeu Classic Car Show on January 16-17, 2021. This show is unprecedented, with more than 1,000 vintage cars representing different time periods and different models. These cars represent the different generations that New Zealand has gone through. There were also more than 100 stalls with all sorts of snacks, entertainment facilities for the children, stage performances, retro fashion and beauty competitions, etc. Many New Zealanders from other cities came and joined in the fun.

Practitioners’ dragon dance and waist drum teams were also invited to perform in front of the center stage. They explained what Falun Dafa is and how the Chinese Communist Party (CCP) cruelly persecutes practitioners who believe in Truthfulness-Compassion-Forbearance. Several people, including the event organizers and the exhibition crew, signed the petition to support efforts to end the persecution. 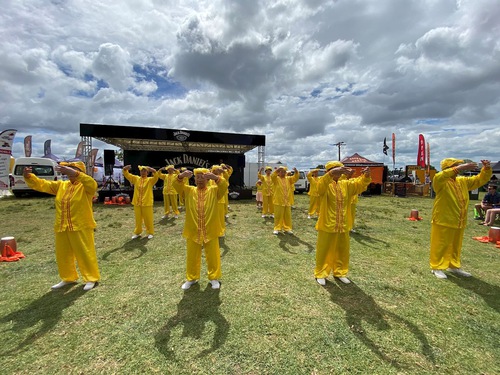 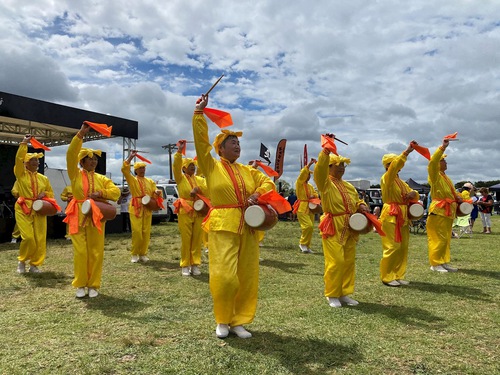 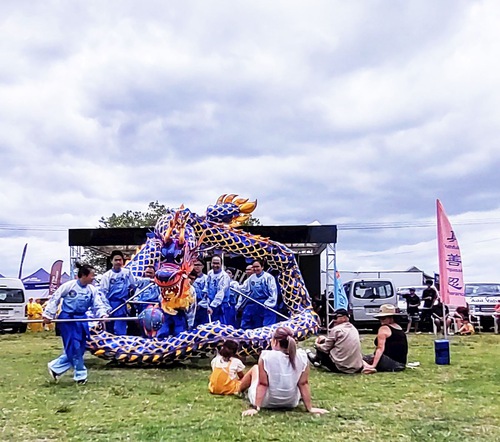 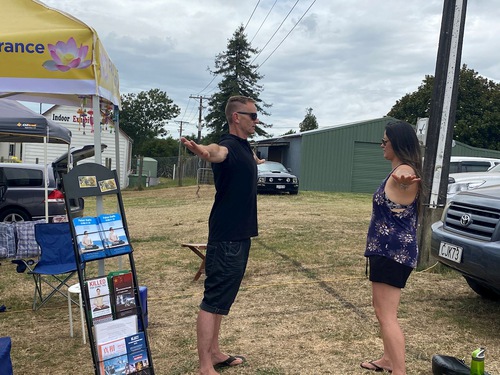 After watching the exercise demonstration, artist Selena Hoani came to the practitioners’ booth to learn the exercises. Selena said, “I am very grateful to all of you for bringing me happiness and this experience. When I overlapped my hands over my lower abdomen, I could feel the warm energy, and my legs also felt this warm energy. Falun Dafa entails great energy. Everyone may have their own spiritual belief but I believe that every one of us are interconnected and Falun Dafa has this strength to be able to connect everyone together.”

Selena said excitedly, “Just now, on stage, when I heard the practitioner talking about the persecution of Falun Dafa by the CCP, I cried. Twenty-one years ago, I saw practitioners at the Auckland city center peacefully protesting. I remember that at that time you collected a list of names that was a few meters long. After 21 years, you all are still raising awareness about these human rights which should long have been given to you. Falun Dafa practitioners just peacefully meditate. They do not bother anyone but they are being persecuted like that by the CCP. I feel that this is a fight about human nature. Although our human instincts are kind, some people may think that this has nothing to do with them and it does not affect them in any way. However, if we remain silent and let such things happen, it is just a matter of time—this persecution will happen to us.” 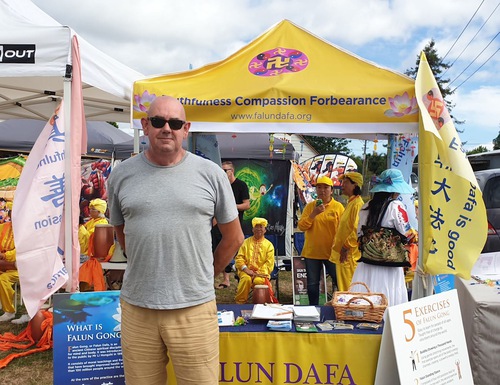 Kim Peacock stopped by the practitioners’ booth and introduced himself. He said that he learned about Falun Dafa many years ago when he saw a banner. Although there were many Chinese words on the banner, he remembered Falun Dafa’s English name, and he went online and did some research. He learned what Falun Dafa is and about the CCP’s persecution, including the live organ harvesting.

Kim wanted to help, so he talked to the practitioners who were protesting in front of the Chinese embassy in Auckland and told them that he wanted to donate some money to help them.

Kim also spread the truth about Falun Dafa among his friends. As he spoke, he took out his phone and showed the practitioner how he used an application on his phone to send out information about Falun Dafa to people. After he understood how severely the CCP persecutes practitioners, Kim decided to stop buying products that are made in China. He thinks that cutting off the CCP’s financial source is the best way to disintegrate the CCP and stop their evil doings. He also reprimanded the New Zealand government for ignoring the CCP’s record of human rights violations. He feels the government is only concerned about trading with the CCP and making money.

Film and Television Producer: Let More People Know the Evilness of the CCP 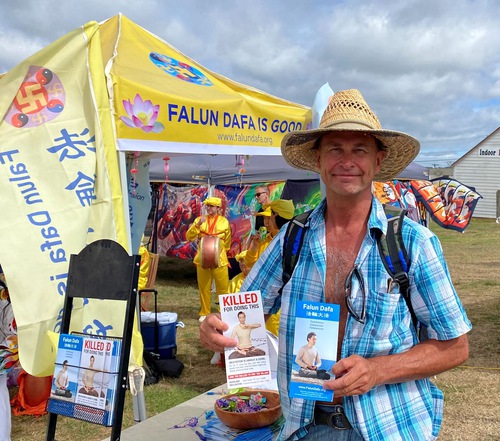 Mike Kerby is a film and television producer. He signed the petition and said, “I am very happy to see your activities. It helps people understand the threat that communism brings. Communism will rip people of their freedom, but a free democracy and having the right to vote is a human right. We must let more people know the evilness of communism and wake them up.”

“I really hate the communism,” Mike said. “See what they did to their own citizens! Take for example the live organ harvesting where they send the people who did not share the same belief as them to the farms to reform, ultimately letting them die there, and then the person just disappears. All just because they were against the CCP. This is really too scary. Under the CCP regime, the Chinese peoples’ living environment and human rights situation is increasingly worsening.”

Mike encouraged practitioners to continue letting their voices be heard and expose the evilness of the CCP continuously through every means. He said, “They (Falun Dafa practitioners) did very well! I am very supportive and agree with them!”

Before leaving, Mike asked practitioners for several truth clarifying brochures. He wants to distribute them to his relatives and friends to help them understand the truth about Falun Dafa.

“Enlightening After a Toothache”