Having Suffered Imprisonment and Brainwashing, a Heilongjiang Taxi Driver Is Detained Again

(Minghui.org) A taxi driver in Hegang City, Heilongjiang Province was arrested in a police sweep in mid-December 2020. This was Mr. Zhao Fuqiang's fourth arrest for upholding his faith in Falun Gong, a spiritual discipline that has been persecuted by the Chinese communist regime since 1999.

Mr. Zhao, in his 50s, was arrested by the police from the Red Army Police Station in Hegang. The police took him away in handcuffs and threatened to sentence him to prison. Mr. Zhao is currently being detained in the Hegan City Detention Center.

Mr. Zhao took up Falun Gong in 1998. After being a heavy smoker and drinker for years, he soon got rid of all these bad habits. However, after the persecution began a year later, he gave up the practice out of fear, and returned to smoking and drinking. He drifted with the moral decline of society.

After years of living an empty life, with much deliberation, Mr. Zhao made up his mind: he would resume practicing Falun Gong. But it was no longer smooth sailing. He was arrested four times and was once sentenced to a three-year prison term.

A group of police officers broke into Mr. Zhao's home on July 22, 2008. They arrested him and confiscated his laptop, two cell phones, and other personal belongings which have not been returned to him. At the Hegang City No. 2 Detention Center, he was forced to sit on a small stool every day and was not given enough food.

Mr. Zhao was tried by the Nanshan District Court on November 27, 2008, and sentenced to three years in prison.

Imprisonment with Torture and Forced Labor

Mr. Zhao was transferred to Jiamusi Prison in October 2009. He was first detained in the training team where Falun Gong practitioners were ordered to give up their belief. Since he refused to do so, he was tortured with a method called “flying a plane.”

In this torture, the victim is forced to spread his legs apart, bend over at ninety degrees, and lift his hands up from behind. Once while Mr. Zhao was in that position, a guard hit him hard on the back with his elbow and knocked him down three times. He was in extreme pain and had difficulty breathing for more than two weeks afterward. 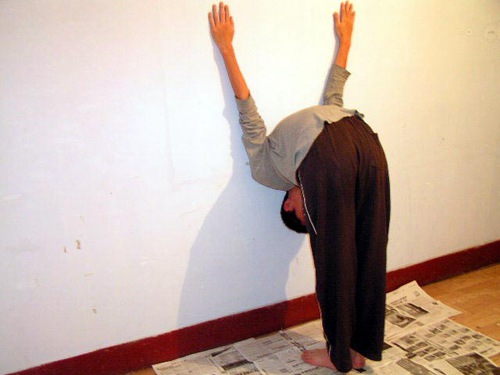 Mr. Zhao was forced to do unpaid labor from 4:00 a.m. to 7:00 p.m. every day and was given limited time to wash up and go to the restroom. He still had to work even after he was injured from the torture.

Later, he was transferred to the 7th Ward, where he was forced to make car cushions. The materials were toxic and made his body itch badly.

As his health deteriorated, Mr. Zhao was transferred to the Patient Ward, where he was still forced to work. When he refused, he was confined in a small cell for fifteen days. The cell was damp and dark with a small window in the door, a bucket for urination and defecation, and no bedding. All of his underclothes were stripped off and he only wore a single layer. To protest the abuse, Mr. Zhao held a hunger strike for six days. He was force-fed every day with extremely salty food, which caused a severe burning sensation. After Mr. Zhao resumed eating, he was given only a steamed bun with cold water for every meal.

When he was released and sent back to the 7th Ward, Mr. Zhao was forced to work as a janitor. Later on, he and two practitioners went on a hunger strike to protest the abuse of another practitioner by the inmates.

During this period of his prison term, three Falun Gong practitioners were persecuted to death in Jiamusi Prison, including Mr. Qin Yueming, Mr. Yu Yungang and another practitioner whose name is unknown.

While driving his cab on the night of June 14, 2013, Mr. Zhao was intercepted by the police and arrested. He was detained in a torture room of the Nanshan District Police Department and interrogated three times under torture.

The police twisted his hands behind his back and handcuffed him. One policeman stood on a stool and vigorously pulled his hands and arms up from behind. He experienced unbearable pain and his heart throbbed.

Mr. Zhao was taken to the Hegang City Second Detention Center on June 16. As he had been on a hunger strike since his arrest, the police brutally pried open his mouth and force-fed him with salt water. The director of the detention center ordered the inmates to do the forced-feeding three times a day and personally pried his mouth open with pliers to show them how to do it.

Mr. Zhao was tortured this way for 20 days before he was taken to the local brainwashing center.

Mr. Zhao was very fragile when he was taken to a brainwashing center in Hegang. He was forced to watch videos defaming Falun Gong all day long. To protest the brainwashing, he resumed the hunger strike, but was subjected to electric shocks twice, leaving his body full of small burned spots. On one occasion, he was shocked while three people held him down on a bed. They also handcuffed him to the bed and brutally force-fed him.

The persecution continued to escalate days later. Brainwashing center personnel handcuffed Mr. Zhao to the back of a chair and then tied his hands and his waist tightly to the back of the chair. He was forced to stay in that position from 6:00 a.m. to 9:00 p.m. He suffered severe back pain and was on the verge of collapse.

He was also intimidated with a prison term. His daughter was brought in to force him to sign a statement to renounce Falun Gong. He was released on August 16, 2013.

Upon returning home, Mr. Zhao found that the 4,000 yuan in cash he kept at home was gone. He suspected that the police had taken it while ransacking his place.

Mr. Zhao was detained again on August 20, 2015 after being monitored for a period of time, and was released shortly afterwards.

“From the 1970s to the Coronavirus Pandemic: How an “Old Friend” of the CCP Shaped U.S. Policy”

“From Ancient Times to Modern Day: “Plagues Have Eyes””