(Minghui.org) Today's news from China includes incidents of persecution that took place in 20 cities or counties in 9 provinces, where at least 59 practitioners were recently persecuted for their belief. 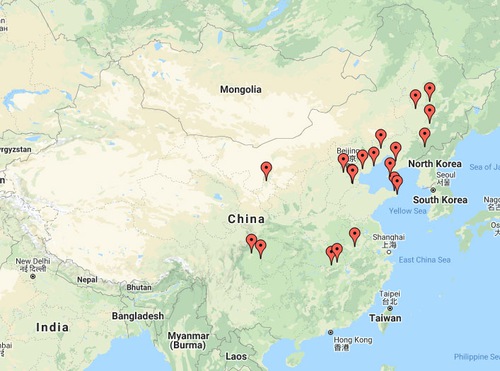 Several officers from the Political and Legal Affairs Committee came to Ms. Dong Liping’s home in Lishu Village of Xiyang Town on the morning of January 5, 2021. Ms. Dong was not at home, but Ms. Hao Shuping was at her home to read the Falun Gong teachings. She was arrested. Both of their homes were ransacked. Ms. Hao was released that evening. The police are still looking for Ms. Dong.

Hu Jing (gender unknown), 85, was sentenced to three and a half years in prison in July 2017. Hu Jing was released on December 19, 2020. While Hu was still detained in prison, Hu’s pension was suspended in April 2020. Hu was also forced to pay back more than 90,000 yuan received previously to the Social Security Bureau. More than 100,000 yuan was deducted from the pension. Hu’s family was also extorted 30,000 yuan by the people who arrange bail for medical treatment when Hu's leg was injured in prison. Hu was not granted bail and the money was not returned.

Mr. Zhang Xiaogang was arrested around 9 p.m. on August 12, 2020, when he had just left his home. Twelve officers from the Shanshang Police Station in the Erdaojiang District arrested him and ransacked his home. He was sent to the Ji’an Detention Center.

Ms. Yang Shuhua, over 50, was sentenced to three years in prison in 2017 for clarifying the truth. After she returned home in July 2019, she has been frequently harassed by community members.

Ms. Yang's pension has been suspended since August 2020. She was forced to work as a janitor in order to support herself. The community staff members harassed her through her workplace and pressured her to sign the guarantee statement, which she refused.

Ms. Yang’s daughter received a harassment call on the morning of December 9, 2020, telling her to sign the guarantee statement on behalf of her mother. She refused.

Ms. Yang was called to meet the big boss and her supervisor in her work place. They told her to press a fingerprint on a blank sheet of paper, which she refused.

Mr. Liu Gaowen from Shehong County was arrested at home around 11 p.m. on December 11, 2020. Ms. Wang Xuezhen was arrested with him as well. Mr. Liu had been arrested multiple times before, but was released due to his physical condition.

Eight practitioners were arrested in Yongning County on September 19, 2019. They were sentenced in the Xixia District Court on December 25, 2020.

Mr. Xie Nanfang was arrested at the same time with the above practitioners. As a result of being persecuted, he died on February 28, 2020, in the No. 2 Ward of Yinchuan Detention Center.

It was learned that Ms. Xu Shengying has been arrested and taken to the brainwashing center in Binhu New District, Hefei City.

Yu Jianying (gender unknown) was arrested on the morning of January 6, 2021 for distributing truth-clarifying materials in Jieshi Town market. Yu was taken to the Jieshi Town Police Station but was released that evening.

Mr. Li Wenbo from Huancui District was arrested on the morning of January 6, 2021. His home was ransacked.

Mr. Sheng Hanqiu and his daughter were arrested around noon on January 6, 2020, when they returned home. More than twelve officers from Rongning Police Station in Rongcheng City and the domestic security division arrested them and took them to the police station for interrogation. Their home was ransacked. The police took away their Dafa books, printer, computer, laminators, etc. Mr. Sheng has now returned home.

Ms. Sun Shuhua, Ms. Wang Xiucui, and Ms. Tian Qinghua live in Hekou Village, Chengshan Town. They were called to the village office on November 2, 2020. Village official Cai Dianguang put the prepared three statements in front of them and demanded that they copy and sign them. One practitioner in the village did not go to the village office when being called. All their benefits as a villager were canceled including their rice, flour and medical treatment.

The cases against thirteen practitioners who were arrested in Fengnan District on August 12, 2020, were filed in the Luannan District Procuratorate. They are scheduled to have court hearings in Luannan District Court on January 20-21, 2021.

Ms. Wang Huilin was taken to the Huanggezhuang Town Police Station on the morning of January 6, 2021. She was told to sign the “residential surveillance” court order, which she refused.

Ms. Hou Hongru was harassed at home twice on December 28 and 29, 2020, by Huang Dewen, a Wulongtang Township government official. Ms. Hou refused to sign the guarantee statement. Huang Dewen threatened her and said that she would not receive the 15,000 yuan bonus if she did not sign it.

Ms. He Xiaoyan from Suning County of Cangzhou City was subjected to “residential surveillance” on July 27, 2020. The case against her was filed to the Renqiu City Procuratorate on January 6, 2021 by the Suning County Domestic Security Division.

Ms. Pei Suyan from Mutou Town of Qinglong County was arrested on March 24, 2020. Her home was ransacked. She was released around 9 p.m. that evening. She later learned that her husband had signed the statement on her behalf and was extorted 20,000 yuan in cash.

Ms. Wei Jinxian, over 60, from Wenquan District was reported to the police for clarifying the truth and was arrested near her home around December 25, 2020. It is unknown where she has been detained.

Ms. Yu Juying, 79, was harassed on the afternoon of January 6, 2020. Four people from the Baquan Police Station in Xisaishan District and the Baquan Community including the community director, knocked on her door. Ms. Yu refused to open the door for them. The police officer kept calling her daughter, who eventually gave in and led these people into the home. They forced elderly Ms. Yu to press her fingerprint on the guarantee statement.

Several practitioners were arrested in the Pulandian District on July 11, 2020. The following practitioners are known to be currently in detention including Mr. Zhang Qingtao, Xu Qiang (gender unknown), Ms. Fan Yumei from Wafangdian, Ms. He Yongqin, Ms. Song Yuchan, and Mr. Du Yongfeng from Dengshahe. It is said that there are more than 30 practitioners in custody.

More practitioners who have been under residential surveillance were called by the procuratorate’s office including Mr. Liu Yongguo from Shihe, the couple of Chu and Wei from Wafangdian, Mr. Zhang Qingtao from Pulandian and Mr. Zhang Qingtao's family members of. They are all facing trial.

Mr. Gao Yuan, around 50, has his 70-year-old mother living with him. A fellow practitioner saw Mr. Gao's mother two weeks ago and learned that he was arrested and detained for more than four months. His home was ransacked and his computer was taken away.

Mr. Cheng Yankai was a teacher in the Tuandian Middle School. He was arrested in July 2012 for hanging truth-clarifying banners and was sentenced to three years in prison. He lost his job. He recently received a notice from the school that an extra month of salary would be issued from 2009 to 2017. Mr. Cheng should receive three months of salary payment accordingly. However, he did not. The deputy director of Gaizhou City Education Bureau said it was because he practiced Falun Gong.

Since September 2020, practitioners in Louzhangzi Town, Qinglong County and its affiliated villages have been harassed by Liu Fusuo and Liu Zhiqing from the town political and legal affairs committee, and the village officials. They were threatened with their children’s schooling and their subsistence allowances.

Yang Xiaoqing has polio and is unable to walk normally. Yang was harassed three times by the township officials. He was threatened and told that his subsistence allowance would be canceled if he did not sign the guarantee statement. Yang’s daughter signed the statement on behalf of Yang, but they forced Yang to press his fingerprint on it.

Mr. Liu Fang refused to sign the statement and did not allow any of his family members to sign it on his behalf. His two sons were forced to stay with their father and not allowed to go home. The township officials threatened to contact his granddaughter in college and make her leave immediately. They also threatened to disqualify his grandchildren and prevent them from entering the military. Under the intense pressure, his daughter-in-law threatened to divorce his son. The old couple in their 70s cannot live a normal life anymore.

Mr. Pan Yingshun from Louzhangzi Town was sentenced to four years and six months in Changli Court in May 2019. Mr. Pan is currently detained in No. 5 Ward of Jidong Prison, Southern Development District, Tangshan City.

“Tianjin Woman Harassed for Practicing Falun Gong, Which Had Cured Her Cancer”