CECC Report: Falun Gong Practitioners Have the Right to Freely Practice Their Faith

(Minghui.org) In its 2020 Annual Human Rights Report released on January 14, 2021, the U.S. Congressional-Executive Commission on China (CECC) said the Chinese Communist Party (CCP) continues to persecute Falun Gong. As a result, the Commission recommended that members of the U.S. Congress and Administration officials emphasize in their engagement with the Chinese government that Falun Gong practitioners have the right to freely practice their faith inside China. 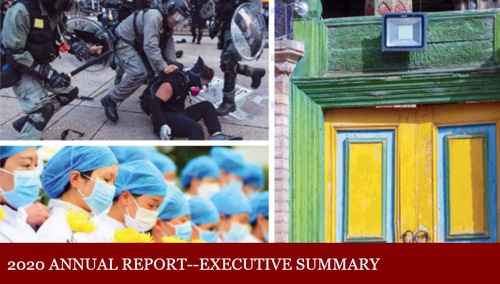 The CECC report also cited another report by the U.S. Department of State that said the CCP employs an ‘‘extralegal, party-run security apparatus to eliminate Falun Gong’’ and other groups.

The CECC cited Minghui.org figures, which indicated that abuse by CCP authorities resulted in the deaths of 96 practitioners in 2019 and an additional 17 in the first quarter of 2020, with the largest numbers in the northern provinces of Shandong, Heilongjiang, Liaoning, and Jilin.

It also highlighted incidents of violations of religious freedom against practitioners documented by Minghui.org, including detention and arrest, beatings, sleep deprivation, and other forms of torture.

The report cited a Minghui report that between January and April 2020, 6 practitioners died as a result of being tortured while in custody, and 11 more died after being released or as a result of mistreatment by security officials.

Additionally, the CECC report included the example of Falun Gong practitioner Cui Fenglan, “who was detained in May 2016 when she went to pick up packages that authorities alleged contained good luck charms bearing Falun Gong-related motif ‘Truth, Forbearance, Compassion.’’’ Authorities have repeatedly harassed or punished Cui in connection with her adherence to Falun Gong since the Chinese government banned the spiritual movement in 1999.” Cui was sentenced to 15 years of imprisonment.

The report also cited another case reported by Minghui.org on January 27, 2020: Falun Gong practitioner Gong Fengqiang was brought to a coronavirus quarantine hospital in Heilongjiang to hide evidence of custodial abuse that left him unconscious.

CECC recommended that members of the U.S. Congress and Administration officials “call on the Chinese government to guarantee to all citizens freedom of religion in accordance with its international human rights obligations and to stress to Chinese authorities that freedom of religion includes the right to freely adopt beliefs and practice religious activities without government interference.”

Specifically, the report also encouraged Congress members and Administration officials to stress to the Chinese government that the right to freedom of religion includes the right of Falun Gong practitioners to freely practice their faith inside China.

The CECC also encouraged U.S. officials to call for the release of Chinese citizens confined, detained, or imprisoned for peacefully pursuing their religious beliefs, as well as people confined, detained, or imprisoned in connection with their association with those people. The Commission said the Administration should use existing laws to hold accountable Chinese government officials and others complicit in severe religious freedom restrictions.