(Minghui.org) During the 2020 U.S. election, Pennsylvania was one of the pivotal battleground states for President Trump. Even though he held more than ten campaign rallies there, the mainstream media did not give them much coverage.

Xiaohua Li, an undergraduate student in the News Department of Pennsylvania State University, drove for hours to cover Trump’s speeches. She submitted her report as homework for her TV News assignment. She thought her report would upset the professor, who instead gave her the highest grade in her class. 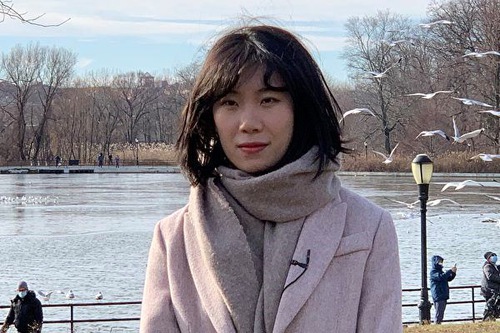 Xiaohua Li is an undergraduate student in the News Department of Pennsylvania State University.

Her professor said her homework would be sent to the White House to show there are students who report the truth.

During the recent election, most media outlets suppressed Trump’s messages and took every opportunity to attack him. The communication and media departments in U.S. universities used Trump as a negative example throughout the four years he's been in the White House. Students usually avoid positively reporting about Trump in their homework.

Li said her university and professors were prone to be very liberal and the teachers often described Trump as a "racist.” She said this label would automatically make young people condemn and avoid such a person.

She said any positive comments about Trump in front of classmates or teachers usually invite scorn or contempt and the speaker considered “weird.” The students turned a blind eye to Trump’s speeches in Pennsylvania.

Li said, “When I told a professor that I wanted to attend Trump’s rally, he got upset and said, ‘How can you go to such a terrible place? Aren’t you afraid?’”

Her TV News class professor assigned homework in October 2020. Her classmates covered events like pumpkin festivals. But she thought Trump’s rally had higher news value even though the event was far away. Even though it meant driving for hours, she decided to go.

“A good friend of mine wanted to go, but she didn’t dare to. She said that if the report on Trump’s rally was turned in as homework, the teacher might be irritated and 'might give me a zero.'”

Li said, “Even if I get a zero, I have to abide by the ethics that journalism students must abide by—to report real news, not fake news.”

She attended Trump’s rallies in Johnstown, Reading, and Erie. Each round trip took five to six hours. She usually returned to her dorm the following morning.

“Once I waited for several hours outside the rally venue to take a photo of Air Force One (the president’s plane) landing. I also interviewed people who traveled from Japan to attend a rally.”

Li then got a big surprise. Her teacher not only didn’t give her a zero, but he also gave her the highest grade in the class, a 96. He also wrote a very sincere and touching comment about her work. Her professor said her homework would be sent to the White House Liaison Office. He was proud of having such a “responsible and ethical” student.

The professor wrote: “This is very good. This historic and important topic runs through your efforts. The president needs to know that there are young and aspiring journalists here. They are not making fake news, but learn the right things and are responsible and ethical. The president also needs to know that the professors here teach news in a fair and ethical way.”

Li said she abides by journalism's ethics with courage because she is a Falun Dafa practitioner and follows Truthfulness-Compassion-Forbearance.

“Falun Dafa teaches me to be truthful and to do true things and gives me courage. I think truthfulness is the principle journalism should adhere to. I did not care much about the result. I only thought about doing the most righteous thing.”

Li said she began practicing Falun Dafa with her parents. She grew up under the compassionate protection and guidance of Dafa and Master Li. She said she has benefited a lot. She gave an example: “I was diagnosed with amblyopia when I was 8 years old. The doctor said it was congenital and could not be cured. If it was aggravated, I would become partially blind. My parents thought I would have surgery when I got older.

“When I was young, I often heard my parents and fellow practitioners mention people recovering from illnesses after sincerely saying, ‘Falun Dafa is good. Truthfulness-Compassion-Forbearance is good.’

“I believed in Dafa and Master. I said to my mom, ‘I want to recite ‘Falun Dafa is good.’ I don’t want surgery.’ Then I recited the words every morning and evening. In a week, I could see things far away. I could even watch TV when I sat far from it.”

Li said when the doctor checked her eyes two weeks later, he was surprised. He wondered how her eyes had recovered so quickly. She and her mother told the doctor that it was because she had said, “Falun Dafa is good.”

“My eyes were completely recovered. I have normal eyesight now. I experienced the amazing power of Dafa! Falun Dafa is good. Truthfulness-Compassion-Forbearance is good! Without Falun Dafa, I would be partly handicapped.”

Li's classmates consistently say she is the best student. Practicing Falun Dafa helps her avoid bad habits and she sets high requirements for herself.

“Falun Dafa teaches us to be good people wherever we are. Master said in his teaching that students should do well in their studies.”

Practicing Dafa gives her wisdom. This semester she got A’s in all five of her courses.

“Liaoning Woman Disabled after Serving Four Years for Her Faith, 27 Years of Service Erased from Her Pension”

“Master Saved Me and Protected My Family”