Finland: Parliament Members and Citizens Support Falun Gong and an End to the Persecution in China

(Minghui.org) Falun Gong practitioners staged peaceful rallies in front of the Finnish Parliament House in Helsinki from September 1-3, 2020 to bring awareness to members of Parliament, calling for support of a joint statement from the Inter-Parliamentary Alliance on China (IPAC). The statement urges the Chinese Communist Party (CCP) to end the 21-year-long persecution of Falun Gong.

This joint statement was initiated by two senior Canadian Members of Parliament (MP) Peter Kent and Judy Sgro, as well as Swedish MP Ann-Sofie Alm. At least 606 current and former MPs in more than 30 countries had signed the statement as of late July.

“Over the past two decades the campaign against Falun Gong practitioners has resulted in the imprisonment of hundreds of thousands of its followers, where they have been subjected to some of the most severe forms of torture. Particularly troubling are reports of the targeting of Falun Gong prisoners for their human organs,” the statement declared. The full text is available on the IPAC website.

“Today we highlight the plight of the Falun Gong together with all religious minorities who have suffered from repression under the rule of the Chinese Communist Party,” the statement continues. “We remind the world of the depravities they continue to suffer, and urge the world to stand up and speak out for an end to such repression, an end to impunity, and for justice, accountability, human rights and human dignity for all the peoples of China.” 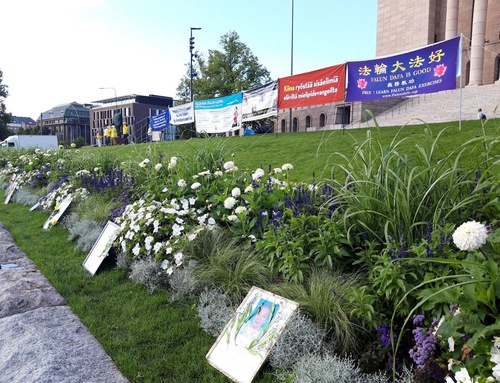 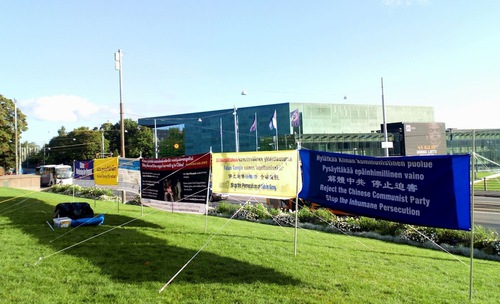 Falun Gong practitioners' banners in front of the Finnish Parliament House on September 1, 2020.

Banners up to 18 yards long were put up with one side facing the Parliament House and the other side facing a major highway leading to Helsinki.

Having witnessed the peaceful activities of Falun Gong practitioners for many years, the police did not dispatch officers to maintain order, and security officers from the Parliament House also greeted practitioners with smiles.

Many MPs who came in and out of the building praised practitioners for their efforts.

“Well done!” one of them remarked, “thank you for bringing us this important message.”

“Your banners are very beautiful,” another MP said. Officials who had just come back from vacation said they would read the emails from practitioners, as well as the materials distributed on-site.

Two members of the European Parliament, Heidi Hautala and Miapetra Kumpula-Natri, have signed the IPAC statement. MP Hautala wrote on Twitter on August 7 that she and Kumpula-Natri had signed the document. “MPs’ petition for peaceful Falun Gong—to end the persecution,” she wrote. She also included a link to a Falun Dafa Information Center article on this topic in her post.

Mikko Kärnä and Johan Kvarnström, two other members of the Finnish Parliament, also signed the statement in July and August, respectively. Both MPs thanked practitioners for the information and were glad to help with the effort.

Other Finnish lawmakers who signed the statement include Anna Kontula, MP and sociologist, and Satu Hassi, MP and former Minister of Environment.

Many pedestrians wanted to sign the petition calling for an end to the persecution. Practitioners talked with members of a group of nearly 100 protesters who held a rally on September 1 in front of the Parliament House and explained about the brutalities in China. After learning how practitioners are treated for their belief, many protesters signed the petition.

One woman told her friend that she had seen Falun Gong practitioners doing the exercises in Sibelius Park. “Lots of Chinese tourists are there, but apparently they had been misled in China. I'm glad they are able to see what Falun Gong is really about here in Finland,” she said.

Remaining silent for a long time, Nina asked, “Can I videotape this event? I want to share your story on social media.” 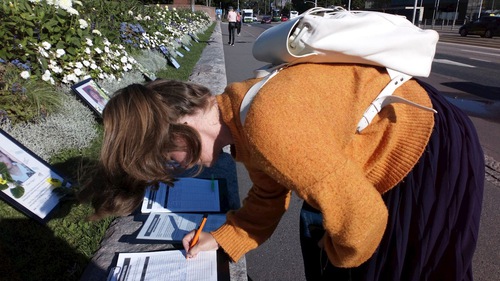 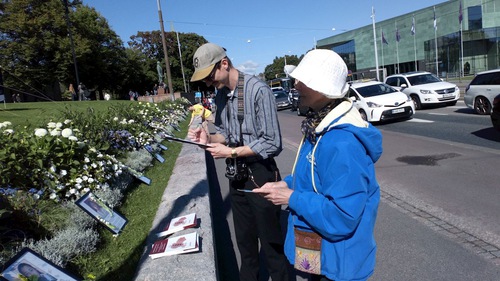 People show their support for ending the persecution in China.

Other passersby were also moved by the tragedies happening in China. One woman said she had signed the petition previously and thanked practitioners for their hard work. Another woman was very sad after hearing about practitioners’ suffering. “Why would they [CCP officials] do this to these innocent people?” she asked. “Look, one of the victims is only 17.” She said she hoped the situation in China would improve.

A college student named Lidia used to read about human rights violations in China online, including those related to Falun Gong. She said it was a different feeling to talk with practitioners and hear their personal stories. “It is shocking to see and hear about the persecution,” she said to a practitioner. “Thank you for the great sacrifice.” 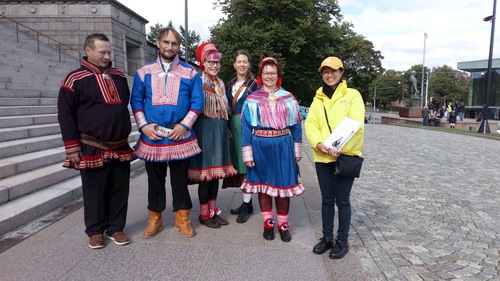 Five Sámi indigenous people pose for a photograph with a Falun Gong practitioner.

A group of five indigenous Sámi people from several Nordic countries were also visiting their MPs with a cameraman. After a practitioner told them how Falun Gong, an ancient practice based on the principles of Truthfulness-Compassion-Forbearance, was severely suppressed in China, all of them signed the petition to support practitioners.