(Minghui.org) Today's news from China includes incidents of persecution that took place in 25 cities or counties in 9 provinces, where at least 53 practitioners were recently persecuted for their belief. 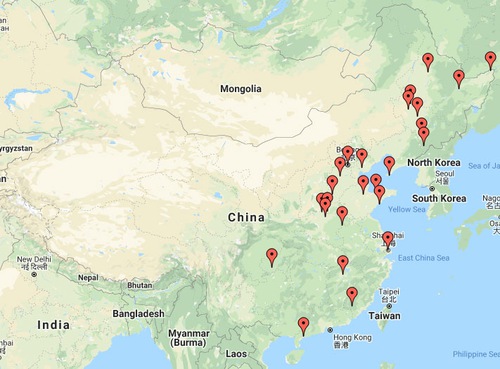 The Meihekou City Political and Legal Affairs Committee, the 610 Office, the Discipline Inspection Commission, Public Security System, and Residential Community personnel coordinated in setting up a brainwashing center to persecute Falun Gong practitioners. The brainwashing center is expected to last for one month, starting on July 17, 2020.

Ms. Gong Lihua and her non-practitioner husband Mr. Zhang Zhanchen, both in their 60s, were arrested and taken to the Meihekou City Police Department by officers from the Hongmei Town Police Station on July 16, 2020. Mr. Zhang is now suffering from after-effects of severe cerebral thrombosis (stroke), incontinence, slurred speech, and he has to use a wheelchair.

Ms. Huang Suxiang, in her 60s, from Shancheng Town, received a call from the community on July 16, 2020. She was told to report to the Meihekou City Police Department and attend a one-month brainwashing class. To avoid persecution, Ms. Huang left home and became displaced. In recent days, the police and community officials still tried to call her and came to her home to harass her.

The police officers used cell phone and tablet apps for facial recognition and scanned her for personal identity information. They took Ms. Gao back home and ransacked the place. They confiscated a laptop, two printers, all her Falun Dafa books, printed materials, several Falun Gong informational seals, USB drives, and over 170,000 yuan in cash (note: to avoid arbitrary account freezes and asset seizure, practitioners sometimes carry cash instead of placing it into a bank account).

Ms. Gao was taken to the Huanglong Police Station, where she was held for two days. She was then taken to the Changchun City No. 4 Detention Center and held in Cell 202. On July 19, Ms. Gao’s family was told to deposit 1,000 yuan in living expenses for her.

Prior to this development, Ms. Zhang was arrested, released, and placed under residential surveillance.

Ms. Ma Shufang, Mr. Huang De’an, and his wife Ms. Wang Ying were also arrested on the evening of August 12. The police ransacked Ms. Ma’s home and confiscated a computer, a printer, and other items.

Mr. Li Jianguo and several other practitioners were summoned and harassed.

Ms. Wu Jifang and Ms. Luan Xia were reported to the police when they talked to people about Falun Gong at the Chengguo farmers market on August 12, 2020. They were arrested and are being held in Dianzi Town.

The police ransacked Ms. Wu’s home and confiscated recorded lectures by Mr. Li Hongzhi (the founder of Falun Gong) and weekly publications. When Ms. Wu’s daughter went to visit her the second time, she was not allowed to see her. She was told that her mother was being held in isolation.

Mr. Qu Jianhui was reported to the police for distributing cards with internet censorship circumvention applications. He was arrested by officers from the Chaoyang Farm Police Station on the morning of April 14, 2020.

Officers ransacked Mr. Qu’s home and interrogated him. He was taken to the Nanchang City No. 9 Hospital for blood tests, examination of internal organs, and a nucleic acid test. He was released that evening.

Ms. Geng Jiqiu was given a three-and-a-half-year prison term. She is being held in the Jilin Province Women's Prison. She developed serious illness symptoms due to the persecution.

Four people from the Yi’an Residential Community, Qianjin District, met Ms. Cui as she walked downstairs in her apartment building on August 1. They asked her for personal information.

Li Jian, head of the Qian’an County Domestic Security Division, and other officers broke into Ms. Liu Yuhua’s home and arrested her on the morning of July 21, 2020. She was released around 9 p.m. that evening.

The Pudong residential community police went to 78-year-old Ms. Li Aiyan’s home in early March 2020. They asked Ms. Li to repeatedly scratch a piece of paper with her finger, and then one officer grabbed her finger, cut it, squeezed out the blood forcefully, and collected samples of her blood.

Residential community police officers went her home again on June 16, 2020. They forced her to write a guarantee statement to quit practicing Falun Gong. The police harassment kept the family anxious and nervous, causing her husband to become ill. He was hospitalized as a result.

Ms. Xia Yunsheng was arrested by seven or eight people who claimed to be from Dongguo Town on the afternoon of August 13, 2020. She was again taken to the Xingtai Brainwashing Center.

The police tried to take them to the Bozhou City Brainwashing Center for “transformation.” The practitioners refused, and the police gave up after listening to their reasoning.

Three of these officers broke into Mr. Xie’s home and confiscated photos of the founder of Falun Gong, desktop calendars, and other items. They also threatened Mr. Xie not to go out to talk to people about Falun Gong.

Mr. Cui Yongqiang from the Development Zone was given a two-year-and-six-month prison term and fined 10,000 yuan by the Huangdao District Court on July 30, 2020. He appealed through his lawyer to the Qingdao City Intermediate Court.

Ms. Zhao Renxia from the Development Zone was given a seven-year prison term and fined 20,000 yuan by the Huangdao District Court on July 30. She appealed through her lawyer to the Qingdao City Intermediate Court.

Officers from the Fuyuan City Domestic Security Division went to Mr. Tan Mingcheng’s home and asked him to sign paperwork on the morning of August 13, 2020. Mr. Tan refused. He was arrested and taken to the police department for interrogation.

They tried to force Ms. Cao to write the three statements to renounce Falun Gong. They told her that if she refused, her and her husband’s pension would be suspended, their bank deposits would be frozen, and she would be driven out of her house. They claimed that as a result of her practicing Falun Gong, the civilization award for over 300 people in the school could be suspended.

Mr. Wu from Shuidong Town, Dianbai District, was arrested by officers from the High-Tech Development Zone Police Department at noon on August 14, 2020.

Ms. Zhang Yuzhen, 84, was reported to the police for distributing Falun Gong materials. Several officers from the Yangzha Police Station used this incident as an excuse and broke into her home and took photos of her on February 17, 2020.

Four police officers knocked on Ms. Zhang’s door on July 23. No one was at home. The officers then went to her non-practitioner son’s home in a nearby building and ransacked that place. They told both mother and son to go to the police station the next day.

On July 24, Ms. Zhang was interrogated for over three hours at the police station. Her home was ransacked again.

On August 7, two residential community officers stopped Ms. Zhang, who was about to go out, at the gate, and asked her if she still practicing Falun Gong. She answered “Yes!” They took photos of her and left.

Mr. Wang Jianjun, 64, who has been held in custody for over a year, was sentenced to three years in prison and fined 15,000 yuan.

It was reported that Ms. Wang Suying, 71, was given a one-year-and-six-month prison term.

Mr. Wang Qiming, 79, was arrested at home by officers from the Guangrao County Domestic Security Division and the Guangrao Sub-district Police Station on August 11, 2020. His home was ransacked and his Falun Dafa books, photos of the founder of Falun Gong, and printed materials were confiscated.

Mr. Wang was taken to the police station, where the officers threatened and interrogated him. He was not released until after 10 p.m.

Five or six officers from the Yinfeng Town Police Station knocked on Mr. Dong Jianquan’s door around 5 a.m. on August 12, 2020. When no one answered the door, the officers jumped over the wall, broke into his home and arrested him.

They ransacked his home and confiscated his cell phone and electric tricycle. They told his daughter-in-law to sign paperwork, which she refused. Mr. Dong developed illness symptoms due to persecution and was admitted to the county hospital.

Mr. Gao Xiaoxiong from Yi County, Baoding City, was arrested in Zunyi City, Guizhou Province in early August 2020. He was brought back to the Yi County Police Department.

Ms. Ding from Yi County, was arrested at her relative's home out of town by local police.

Domestic Security officers Wu Yongdong and Zou Shengyong broke into Ms. He Xiurong’s home in Yubei District when she was ready to go out on July 20, 2020. They searched her bag and found three cell phones, several keepsakes, and 300 yuan in paper bills with Falun Gong information printed on them. They ransacked her home and confiscated Falun Gong books, audio players, and two laptops.

Ms. He was taken to the Shuangfeng Police Station for interrogation. She was detained for 10 days by the Yubei District Police Department on the grounds that she had paper bills with Falun Gong information printed on them.

Ms. Sun Fu’e from Sanyang Township, Wuzhi County, was reported to the police. The officers arrested her, her husband, their grandson, and their granddaughter, and took them to the Xiaodong Township Police Station on May 26, 2020.

Officers ransacked their home and confiscated a large number of DVDs, Minghui Weekly, printed materials, her wallet (with over 1,000 yuan in it), national ID card, senior bus card, among other items. They were released on bail the following day after the family paid 10,000 yuan.

Police in Zhengzhou City, in a coordinated campaign, ransacked homes of several practitioners on July 17, 2020.

The police confiscated photos of the founder of Falun Gong from Ms. Wang Guizhen’s home.

“Thoughts on Helping Other Practitioners Financially After Reading “Another Stick Warning””