35,000 Germans Call for an End to the Persecution of Falun Gong 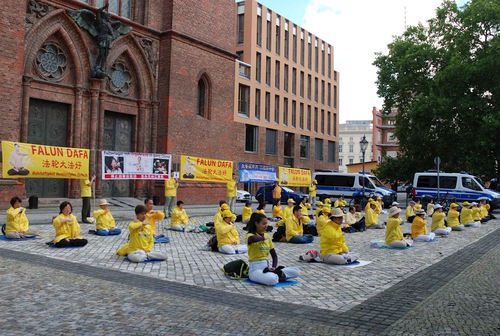 Falun Dafa practitioners do the Dafa exercises outside the Foreign Ministry of Germany and call on the government to stop the CCP from persecuting Falun Gong in China.

Germans Have the Right to Know the Truth

“Whether from the perspective of human rights or the law,” said Ms. Dai, “people need to be aware that evil, which includes killing people for their organs, exists in this world. She said a government has the responsibility to let its people know that the CCP is evil and that German companies and organizations need to know whom they are interacting with when they do business or share knowledge.

“As we know, many Western countries have advanced medical technologies and excellent medical equipment. They help the CCP train their physicians and provide equipment for their medical activities, but many of them don’t know that the CCP is evil,” she said, referring to the communist regime’s forced organ harvesting from Falun Gong practitioners to supply the transplant industry.

“Germans need to be aware of how the CCP uses the technologies and equipment it gets from Germany. We hope that the German government knows how they should interact with this evil CCP regime.”

Ms. Dai also noted that, if a company or organization knows the CCP is committing a crime but still assists the CCP in its illegal acts, then legal and government action must be taken to stop it.

“When we talked about such things with the German people, many of them expressed the opinion that they had a right to know about the atrocities committed by the CCP. After they knew about it, they wanted to do something for those persecuted Falun Gong practitioners but didn’t know what. Signing a petition is one way to show one’s stance and have one’s voice be heard.”

Ms. Dai said that righteous voices need to be encouraged and supported, that it’s the right thing to do to remind each other in the face of danger. While collecting signatures, she found that “many people were watching to see how others would respond.” For many people, she said, it’s easier to act on their conscience when they have support from everyone around them.

“Perhaps many people do not state clearly, ‘I must stand firmly with justice.’ But the majority of people have a basic sense of right and wrong, an ability to discern good from evil. When one hears that people are being murdered somewhere, he thinks, ‘Then what can I do?’ If there are always voices demanding an end to the crime, some of these people who want to protest the crime, yet are not so brave, will gain the courage to stand up. A kind heart also needs to be encouraged, she said.

“If our government thinks that its people are not concerned about the persecution happening in China, and nobody wants to discuss these things, then why would I want to offend the CCP? Such a mentality would affect how the German government chooses between good and evil. Many Western governments don’t know about the CCP’s evilness. If the German government’s senior officials think they cannot do anything about the CCP, then these German voices [behind these signatures] tell the government that this attitude is wrong, that ‘We Germans can say “No” to the CCP.’”

“I usually talk to people from the angle of science,” he said. “People’s many illnesses, negative thoughts, and emotions come from negative energy. Through cultivation, people begin to take things lightly. Their negative substance is reduced, so their health improves. If time permits, I use my cell phone to find and share Dafa practice sites and contact information in the person’s city.”

“The book Zhuan Falun can be purchased at bookstores or ordered online. But you can also download the books and exercise music for free. After talking to me about the practice, many people said, ‘This is what we truly need. It’s terrific.’”

When asked about what motivated him to collect signatures, Mr. Yue said, “Because it’s the right thing to do. It conforms with people’s universal values. We will continue doing it until the persecution ends.” 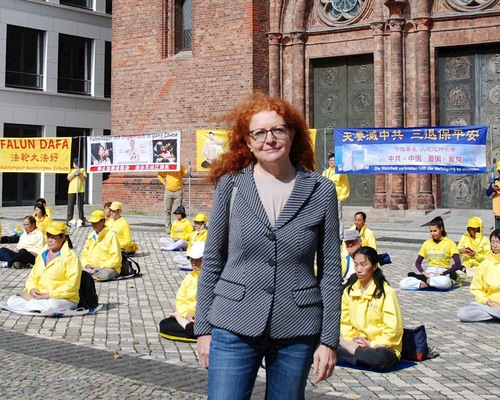 Margarete Bause, a member of the German parliament and the Green Party’s spokesperson regarding human rights issues, came to support the Falun Dafa activity.

Margarete Bause, a member of the German parliament and the Green Party’s spokesperson on human rights issues, came to talk to practitioners and express her support. She has spoken up for Falun Dafa practitioners many times and publicly condemned the CCP’s crimes.