(Minghui.org) Falun Dafa practitioners in Slovakia held an Information Day and signature drive event in Nitra on August 22, 2020. They told people about Falun Dafa and encouraged them to sign a petition to stop the persecution of the practice in China. 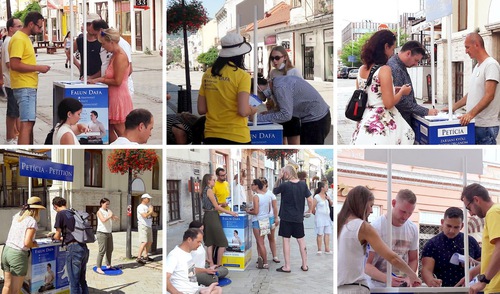 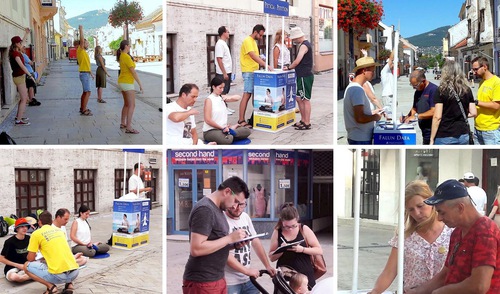 Nitra is the fourth largest city in Slovakia with a long history. Practitioners set up a booth along Štefánikov Trya, a pedestrian-only street in downtown Nitra. A few practitioners demonstrated the exercises, while others passed out fliers.

When a gentleman who took a flier asked what it was, a practitioner told him that Falun Dafa, also known as Falun Gong, is an advanced cultivation practice of mind and body that was first introduced to the public by Master Li Hongzhi in 1992 in China. Since then, millions of people in over 100 countries have taken up the peaceful spiritual practice. In 1999, the Chinese communist regime launched a brutal persecution of Falun Dafa, which is still ongoing.

Falun Gong practitioners in China have been imprisoned, tortured, and even had their vital organs removed while they were still alive and sold for transplant by the regime.

The man readily signed a petition to stop the persecution and forced organ harvesting.

A lady was in tears after hearing about the torture and organ harvesting from living Falun Gong practitioners. She said it was important to expose and oppose the persecution, that every signature is important. Her entire family signed the petition.

A boy was amazed by the meditating practitioners and wanted to learn. A practitioner taught him to sit with both legs crossed. He said that he could feel the atmosphere was peaceful even though the area was very noisy.

A lady who signed the petition said she was interested in learning the exercises after reading about the practice online. Practitioners invited her to join them to do the exercises in a park.

One man said that he had to sign the petition, that his conscience would never be at peace if he didn’t.

Before the closing of the event, a young man with three little children came by. He learned the facts and signed the petition.