(Minghui.org) Falun Dafa practitioners in Greater Philadelphia held a rally on August 30, 2020, to celebrate the courage and resolve of the more than 360 million Chinese who have renounced their affiliation with the Chinese Community Party. The rally was rescheduled from August 29 to August 30 due to weather. State Representative Mary Isaacson issued a citation in support of the practitioners’ rally. 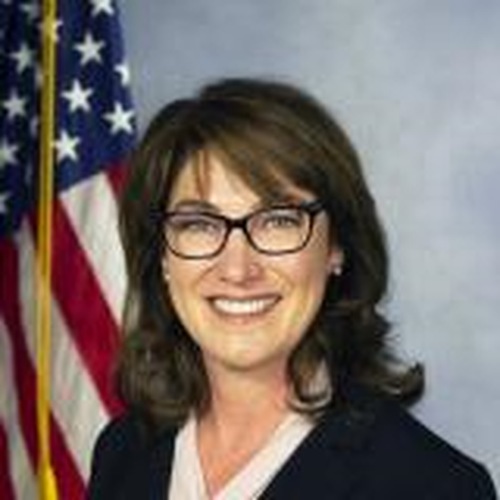 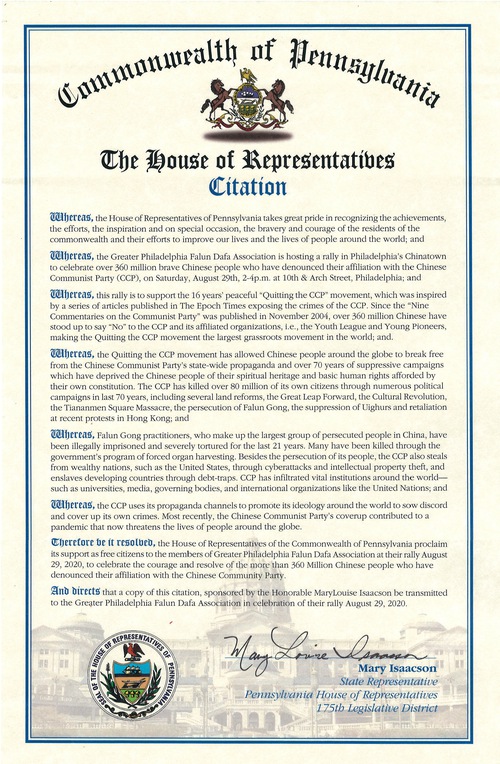 Whereas, the House of Representatives of Pennsylvania takes great pride in recognizing the achievements, the efforts, the inspiration and on special occasion, the bravery and courage of the residents of the commonwealth and their efforts to improve our lives and the lives of people around the world; and

Whereas, the Greater Philadelphia Falun Dafa Association is hosting a rally in Philadelphia’s Chinatown to celebrate over 360 million brave Chinese people who have denounced their affiliation with the Chinese Communist Party (CCP), on Saturday, August 29th, 2-4p.m. at 10th & Arch Street, Philadelphia; and

Whereas, this rally is to support the 16 years’ peaceful ‘Quitting the CCP’ movement, which was inspired by a series of articles published in The Epoch Times exposing the crimes of the CCP. Since the ‘Nine Commentaries on the Communist Party’ was published in November 2004, over 360 million Chinese have stood up to say ‘No’ to the CCP and its affiliated organizations, i.e., the Youth League and Young Pioneers, making the Quitting the CCP movement the largest grassroots movement in the world; and.

Whereas, the Quitting the CCP movement has allowed Chinese people around the globe to break free from the Chinese Communist Party’s state-wide propaganda and over 70 years of suppressive campaigns which have deprived the Chinese people of their spiritual heritage and basic human rights afforded by their own constitution. The CCP has killed over 80 million of its own citizens through numerous political campaigns in last 70 years, including several land reforms, the Great Leap Forward, the Cultural Revolution, the Tiananmen Square Massacre, the persecution of Falun Gong, the suppression of Uighurs and retaliation at recent protests in Hong Kong; and

“Whereas, Falun Gong practitioners, who make up the largest group of persecuted people in China, have been illegally imprisoned and severely tortured for the last 21 years. Many have been killed through the government's program of forced organ harvesting. Besides the persecution of its people, the CCP also steals from wealthy nations, such as the United States, through cyberattacks and intellectual property theft, and enslaves developing countries through debt-traps. CCP has infiltrated vital institutions around the world–such as universities, media, governing bodies, and international organizations like the United Nations; and

Whereas, the CCP uses its propaganda channels to promote its ideology around the world to sow discord and cover up its own crimes. Most recently, the Chinese Communist Party’s coverup contributed to a pandemic that now threatens the lives of people around the globe.

Therefore be it resolved, the House of Representatives of the Commonwealth of Pennsylvania proclaim its support as free citizens to the members of Greater Philadelphia Falun Dafa Association at their rally August 29, 2020, to celebrate the courage and resolve of the more than 360 Million Chinese people who have denounced their affiliation with the Chinese Community Party.

And directs that a copy of this citation, sponsored by the Honorable Marylouise Isaacson be transmitted to the Greater Philadelphia Falun Dafa Association in celebration of their rally August 29, 2020.

“Germany: People Encourage Practitioners to Expose the Persecution: “You're Doing the Right Thing!””