(Minghui.org) After returning home from serving three years for her faith in Falun Gong, 78-year-old Ms. Wang Fengying was devastated to find more than two-thirds of her monthly retirement benefits are now being garnished.

Ms. Wang, of Nanchang City, Jiangxi Province, is currently receiving 800 yuan of her monthly payment and the rest—1,800 yuan per month—is withheld by the Nanchang Social Security Bureau to pay back the more than 70,000 yuan she received while incarcerated from June 2017 to June 2020.

In recent years, the Social Security Bureau across China have been withholding pensions from practitioners when they serve time for their faith, leaving many in destitute situations. 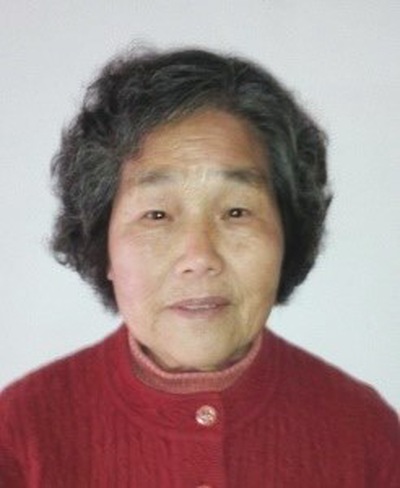 Ms. Wang was arrested in June 2017 for posting Falun Gong banners and later sentenced to three years in prison. While at the Jiangxi Women’s Prison, she was subjected to slave labor, deprived of sleep and hung by the hands. The guards also verbally abused and force-fed her of unknown drugs.

Ms. Wang confirms that the medication she was forced to take were the same as those given to Ms. Luo Chunrong, which is believed to cause damage to the central nervous system.

Ms. Wang’s arrest and sentence caused much grief to her husband Mr. Tang Weiji. The otherwise healthy 86-year-old experienced loss of appetite and insomnia. He made multiple trips to appeal and pleaded for his wife’s release at the local police department, district procuratorate, and district court, but to no avail. The tremendous mental pressure, fear and worries took a toll on Mr. Tang and caused his health to rapidly deteriorate. He passed away in agony in June 2019, a year before Ms. Wang’s release.

Ms. Wang is a retiree from Nanchang Fruit & Grocery Company (now a subsidiary of the Ganjiang Hotel). She has been targeted for her belief since the persecution against Falun Gong was launched in 1999. Over the past 21 years Ms. Wang has been repeatedly arrested, detained, and put through brainwashing. In 2016 alone, she was arrested four times.

She was force-fed at the Yongxiu County Detention Center, made to perform slave labor at the Majialong Forced Labor Camp in Jiujiang City, and interrogated for four days straight at the Xinghua City Police Department Domestic Security Division in Jiangsu Province during her previous arrests.

While posting Falun Gong banners in Honggutan District on June 12, 2017, Ms. Wang was arrested and taken to Honggutan Domestic Security Division where she was strapped to a Tiger Bench and interrogated for three hours. With no other officers willing to give a hand, Director Xu pushed and tied Ms. Wang down himself. 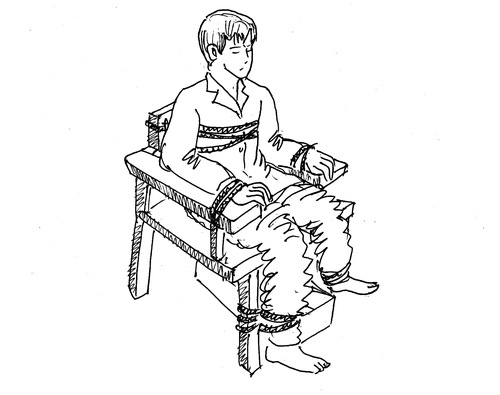 The next day, a group of officers ransacked Ms. Wang’s home located at the Changyun Transportation Department, as well as her oldest daughter’s home. Her youngest son’s home was searched twice, on June 16 and June 17, 2017.

The officers wore plainclothes and did not show a valid search warrant or any paperwork. They smashed the locks open, barged in and turned the homes upside down. They confiscated pictures of the founder of Falun Gong, books, four laptops that belong to Ms. Wang, her son, and her grandson, four printers, and other personal belongings. Ms. Wang’s 86-year-old husband was body-searched and the police took 500 yuan from him. Ms. Wang’s retirement pension was also taken.

After her arrest, Ms. Wang’s husband made multiple visits to the Fenghuangzhou Police Station, Honggutan Police Department, Donghu District Procuratorate, and Donghu District Court to petition for his wife’s release, but to no avail.

Ms. Wang was tried at 11 am on November 13, 2017, at the Donghu District Court. Eight family members including Ms. Wang’s husband and their children were allowed to attend the hearing. Trial judge Li Yiqing read the indictment and pronounced Ms. Wang guilty according to Article 300 of the Criminal Law— “undermining law enforcement with a cult organization,” a standard pretext used to impose unlawful judgments on Falun Gong practitioners.

Ms. Wang pleaded not guilty. She stated, “Practicing Falun Gong made me a morally sound and physically healthy person. I try to be a kind person and did not commit any crime nor did I break the law. I do not acknowledge any false allegation against me and will not comply with any court decision.”

She demanded all personal belongings confiscated to be returned, including bank deposit books and cash. Ms. Wang’s husband provided a specific number of the amount of cash taken by the police.

The hearing was adjourned at noon and Ms. Wang was notified later that she was sentenced to three years of imprisonment.

Torture and Mistreatment at the Jiangxi Women’s Prison

Since the day she arrived at the Jiangxi Women’s Prison, Ms. Wang was monitored by three inmates around the clock. One of them, Liu Xiang, intimidated Ms. Wang and didn’t let her sleep. The inmates beat and verbally insulted Ms. Wang at will and sometimes took out their anger on Ms. Wang.

To “transform” her, Ms. Wang was forced to watch the Chinese Communist Party’s propaganda programs slandering Falun Gong. She was made to stand under the sun and march during summer. While standing indoors, inmate Chen Yuan made Ms. Wang stand in the middle of the room so she couldn’t lean on the wall.

Ms. Wang was 75 years old at the time. She was at first made to stand for two hours, then it increased to four. Once, Ms. Wang couldn’t do it anymore and shouted, “I can’t stand anymore. My legs are broken.” The inmates threatened and several pulled, dragged, and pushed her to the ground with hundreds of inmates watching. Ms. Wang was often made to stand until midnight.

Inmate Wang Xiuqin was especially vicious toward Ms. Wang. She once pushed Ms. Wang’s head into the toilet claiming, “This old hag does not listen.”

Inmate Cai Zhuoyan also made things difficult for Ms. Wang. She often incited others to bully Ms. Wang and made her do things for them like a servant. On Moon Festival one year, Cai grabbed Ms. Wang’s food out of her hand and said, “You don’t do anything around here but you still want to eat?” Another inmate slapped Ms. Wang with a book and inmate Wang Xiuqin hit Ms. Wang’s head.

Two additional inmates were assigned later to monitor Ms. Wang. These two inmates received special training to use all means to make Falun Gong practitioners “transform,” or renounce it.

They tried to coerce Ms. Wang into writing the “four statements” repenting practicing Falun Gong, slandering it, and promising to no longer practice it. Ms. Wang refuse to write such statements and was reported to the prison authorities.

Several inmates pushed Ms. Wang to the ground and beat her while one grabbed her head, one pinned down her feet, one pulled on her hands, and one dragged her. As if being pulled into different directions by five horses, Ms. Wang couldn’t move or talk.

When the inmates accused Ms. Wang of playing dead, Ms. Wang mustered all her energy and told them that Falun Dafais good. She explained that the persecution was wrong and advised the inmates not to mistreat innocent Dafa practitioners. The inmates slapped Ms. Wang's mouth.

Ms. Wang was carried to the workshop on the sixth floor where she was put in a straitjacket and hung on a metal rack. Ms. Wang experienced pain in the chest and legs. Instructor Wu Zhiyong and inmate Yu Chen from Ms. Wang’s division joined in and tried to get Ms. Wang to write the “four statements.”

Ms. Wang shouted, “I won’t write it. I won’t write it.” The inmates called for the Special Unit which consisted of guards trained to torture inmates. A few tall female guards showed up quickly and attacked Ms. Wang. These guards were bigger and stronger than average and some weighted more than 175 lbs.

One of them pushed Ms. Wang to the ground and sat on her. Ms. Wang could barely breathe. They didn’t let Ms. Wang sleep or even sit on the bed. Ms. Wang was put in a straitjacket again and hung up in the air with one arm up higher than the other. The pain was excruciating and Ms. Wang sweated profusely and soaked the straitjacket

The inmates were physically examined often at Jiangxi Women’s Prison. The prison authorities claimed that they cared about the inmates’ health but that was not why they were frequently examined. The many pieces of evidence pointed to state-sanctioned organ harvesting of living prisoners of conscience in China which might explain the ulterior motives of the prison authorities.

Ms. Wang was taken to the clinic for a physical examination on her first day at the prison and her blood sample was drawn without her consent. The prison authorities found out that Ms. Wang had high blood pressure and made her take medication every day. After taking the medication for about a year, Ms. Wang grew suspicious and resisted taking these drugs.

As a consequence of not taking these drugs, Ms. Wang was not allowed to buy any toiletries from the prison store and was not allowed any visitation. Ms. Wang told the guard Zhao on March 31, 2018, that she needed soap and tissue paper and the guard didn’t allow her. Ms. Wang warned that she’d file a complaint that infuriated Zhao. The Special Unit was called and six officers showed up and hung Ms. Wang.

Four officers then dragged Ms. Wang to the warehouse, put her in a straitjacket and hung her on the metal rack. They separated Ms. Wang’s hands and legs so that she couldn’t stay still. It was so painful that Ms. Wang cried out loud. She was hung for more than three hours. 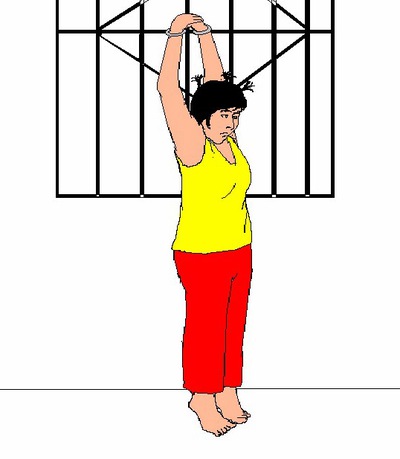 Torture enactment: Hanging by the hands

Ms. Wang was told later that her blood pressure was very high and was made to take medication. When she refused, the Special Unit was called to force feed her the pills. Seven officers pinned her down and propped her head, grabbed her hands, restrained her feet and forced the pills down her throat.

Ms. Wang started to notice that the inmates put pills into the hot water thermos so she stopped drinking water out of the thermos. She also figured out that the pills were sometimes mixed into her food so she stopped eating. When she didn’t eat the food, she was beaten. Ms. Wang recalled the vegetables smelled like the medication sometimes as if it was prepared with the pills dissolved.

Ms. Wang had to be creative to get food. Sometimes she ate leftovers from a different table. Once, she took an inmate’s bowl and pushed her own in front of the inmate. The inmate turned pale—she jumped up, quickly grabbed her bowl and shouted, “We can’t switch. We can’t switch.”

To get her to take the medication, two inmates blocked the path to the cafeteria with a food cart one time and Ms. Wang couldn’t get passed. She tried to step onto a stool to get around the cart but inmate Yao Ximei cursed her and started pulling on her while inmate Sun Weimei punched her. It was around dinner time and a lot of inmates stopped and watched. Ms. Wang had swelling in her head due to the beatings.

Ms. Wang told her husband once during visitation, “The prison authorities forced me to take high blood pressure medication. If I don’t take it, they’d force-feed it to me. I am not sick. Why do they force me to take those pills?” She told her husband during another visit, “If anything happens to me, just remember I didn’t commit suicide.”