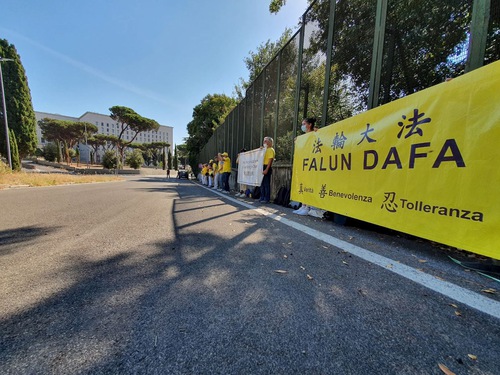 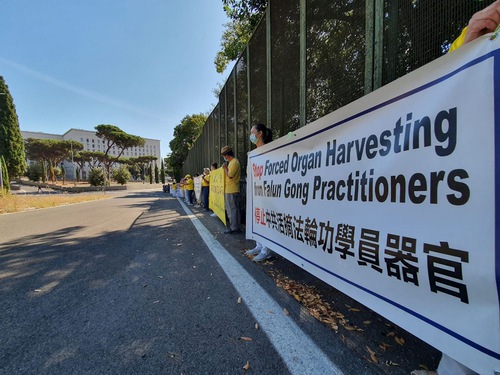 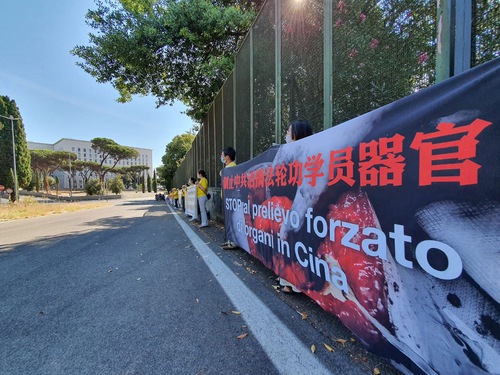 Falun Gong practitioners protest the CCP’s persecution of their faith during the visit of Chinese foreign minister Wang Yi.

Falun Gong practitioners held banners along the route from the Ministry of Foreign Affairs to Villa Madama, the meeting location. They wished to deliver their message to the officials in the meeting. Reporters paused to learn about the peaceful protest, and some passing drivers slowed down to read the banners, take photos, and give the practitioners thumbs-up.

The Falun Dafa Association of Italy wrote to Foreign Minister Di Maio and the Prime Minister to urge the Italian government to take substantive actions to help stop the brutal persecution in China.

The letter stated, “A few weeks ago in marking the 21st anniversary of the CCP’s persecution, over 600 elected officials, including members of the Italian Parliament, signed a joint statement to urge the CCP to stop the genocidal persecution. The Inter-Parliamentary Alliance on China (IPAC) issued a statement urging the end of the persecution of Falun Gong.”

The letter also mentioned the judgment by the independent China Tribunal, which found that Falun Gong practitioners are the main victims of the CCP’s forced organ harvesting, a crime against humanity.

“DingTalk Monitors People Around the Clock”