(Minghui.org) A public hearing about adopting a version of the Global Magnitsky Human Rights Accountability Act was held by the German parliament in Berlin on September 14, 2020.

Falun Gong practitioners gathered outside the parliament building to show support for adopting the act, which would allow the German government to sanction foreign human rights abusers, freeze their assets in Germany, and restrict their travel. The United States was the first country to sign such an act into law with the Magnitsky Rule of Law Accountability Act of 2012. The U.S. has used the law to sanction around 70 officials from more than a dozen countries.

Falun Gong practitioners hope that Germany and other European countries will adopt legislation like the accountability act and stop providing safe havens and financial markets to Chinese Communist Party (CCP) officials who have participated in organ harvesting during the 21-year-long persecution of Falun Gong. 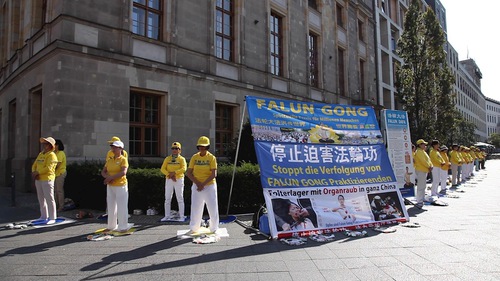 Falun Gong practitioners rally outside the German parliament on September 14, 2020, to show support for the Global Magnitsky Human Rights Accountability Act, which would enable Germany to sanction CCP officials who have participated in the persecution of Falun Gong.

In October 2019, Ralf Gronau, a German engineer, initiated an online petition calling on the German government to adopt a human rights accountability act and sanction human rights abusers. The petition garnered more than 80,000 signatures, surpassing the threshold for a hearing of 50,000. The Petition Committee of the Parliament, or the Reichstag Petition Committee, thus organized a public hearing about an accountability act and broadcast the hearing live on its website.

Bundestag member Gyde Jensen, who is a Free Democratic Party member and chairwoman of the Bundestag Committee on Human Rights and Humanitarian Aid, spoke at the hearing. She said that her committee had submitted an application to the Bundestag a week ago to legislate a similar accountability act. The act will be tailored to target corruption and human rights violators, and punishments would include visa bans and freezing of assets in Germany.

Margarete Bause, Bundestag member, member of Green Party, and spokesperson for Human Rights Affairs, expressed her appreciation to Gronau for initiating the petition that led to the public hearing. She suggested that Germany work at legislating on two tracks, with German legislation and legislation at the European Union (EU) level.

Before the hearing, both Jensen and Bause joined a protest outside the German Chancellery. The protest asked Chancellor Angela Merkel to discuss human rights issues with Chinese Communist Party Leader Xi Jinping. Jensen said Europe has significant importance in the world economy and, “we ought to put all our weight to the balance.”

Ministry of Foreign Affairs: Sanctions at the EU Level

Petra Sigmund, director-general of Asia-Pacific for the German Ministry of Foreign Affairs, said that there was no disagreement among members of the EU regarding human rights violations in China, including the concentration camps in Xinjiang Province and the National Security Law in Hong Kong.

Some countries in Europe have already passed and implemented some sanctions at the national level, and the EU is now pushing an agreement on the EU level.

Sigmund said, “We are confident that the EU can pass unified sanctions on China’s human rights violation issues when Germany serves as the rotation chairman, or shortly after.”

Ralf Gronau, who initiated the petition, spoke at the hearing and answered questions from the members of the Bundestag who were in attendance. He said a human rights accountability act would target government officials who have severely violated human rights. The act would have no impact on the life of regular Chinese citizens, but would shock the masterminds of the Chinese Communist Party.

Medical professor Li Huige of the University of Mainz spoke at the hearing. He explained the role that Wang Lijun, the former head of the Chongqing Public Security Department, had played in organ harvesting. Li explained that Wang had admitted that an organ transplant center managed by the Chongqing Public Security Department had conducted more than 2000 experiments in two years. Experiments on such a large scale raised serious questions about the source of the organs.