(Minghui.org) Falun Dafa practitioners held large banners in front of the Chinese Consulate in Montreal on September 15, 2020, to raise awareness of the Chinese Communist Party’s (CCP) persecution. They also had a car tour and ten cars with banners on top drove through the streets near the consulate. 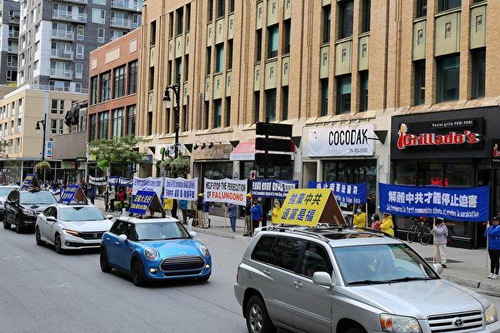 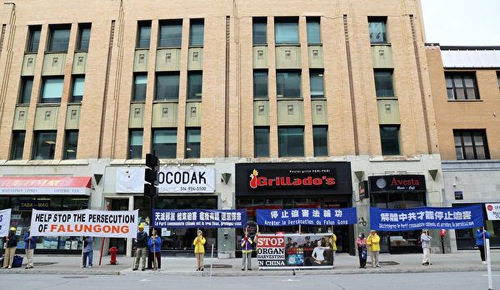 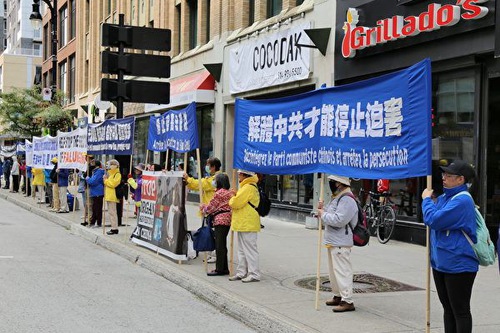 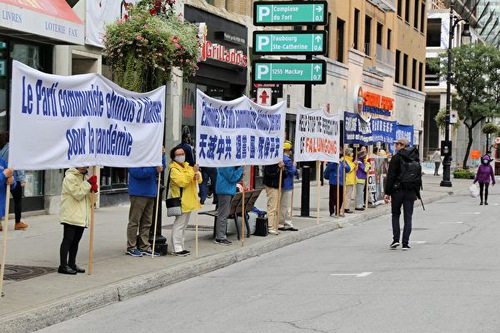 Montreal is a bilingual city so practitioners prepared banners in English, French and Chinese, such as “Stop the Persecution of Falun Gong”, and “Quit the CCP for a Safe Future.”

Ms. Yang of the Montreal Service Center for Quitting the CCP said that the CCP has continued persecuting Falun Gong and recently stepped up the harassment to force practitioners to give up their belief.

The CCP’s Political and Legal Affairs Committee issued orders in recent months to exert the persecution of Falun Dafa practitioners throughout China. The Political and Legal Affairs Committee at each level of government, 610 Office (an extralegal organization in charge of persecuting Falun Dafa), local administration and police go to practitioners’ homes and tell them to give up their belief and sign three statements.

Many passersby expressed support during the practitioners' event in Montreal. Several people gave them thumbs up or left their email addresses to receive the signature collection website which calls for sanctioning of the CCP officials involved in the persecution.

“Canadian Government Should Take Action to Stop the Persecution” 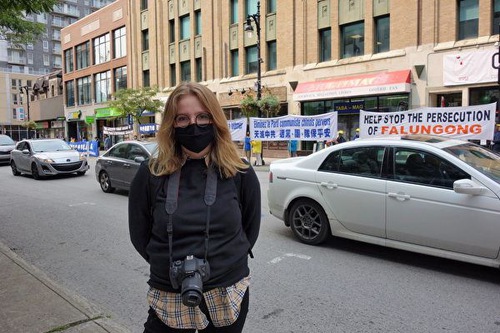 “It’s great and meaningful to hold such an event in downtown Montreal,” said Jeanne, who attends school near the Chinese Consulate. She said it was the first time she's heard of the persecution. She supported practitioners' letting people know about it and said, “The Canadian government should take action to stop this persecution.” 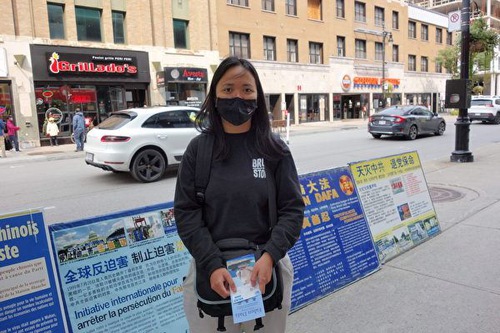 Angelica from the Philippines

“I think this activity is very important to let people know what is happening in China,” Angelica said, “The persecution of faith is very inhumane. It deprives people of their freedom of expression and freedom of belief.” 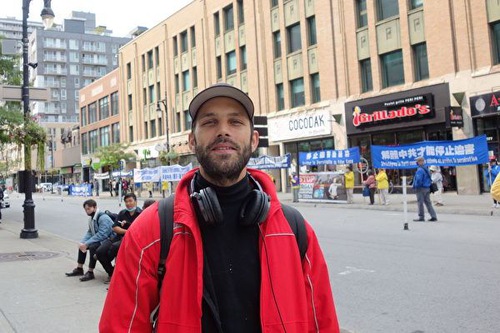 “It is evil for a government to do such a deed,” Montreal resident Kris condemned the CCP’s state-sanctioned organ harvesting from living Falun Gong practitioners. “It is important for you to expose such an issue in front of the Chinese Consulate.” 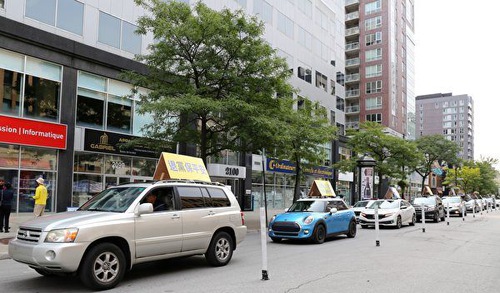 The Service Center for Quitting the CCP designates August and September as Quitting the CCP Months. Practitioners reach out to Chinese people and invite them to learn about the CCP’s true nature and renounce the Party.

Practitioners held four car tours recently in Montreal. Ten cars with banners on top drove through the streets near the consulate.

Practitioner Ruth said she was touched by people's encouragement during the tour. Several pedestrians gave them thumbs up.

“You are doing right,” a lady said when the cars stopped in front of the consulate, “They (the CCP) damaged my country.” She told Ruth she was from Spain and lived in Montreal for 40 years.

She said the CCP infiltrated Spain and promoted it's so-called one road and one belt initiative, a CCP effort to infiltrate and control the world. Spain has suffered greatly during the coronavirus pandemic. She encouraged Ruth, “Please continue your efforts.”