Los Angeles: Protesting the Persecution of Falun Gong Outside the Chinese Consulate

(Minghui.org) Falun Gong practitioners in Los Angeles held a rally outside the Chinese Consulate on September 13, 2020, to protest the Chinese Communist Party’s (CCP) persecution. Practitioners condemned the CCP for escalating the persecution and called on all governments to sanction Jiang Zemin, the former head of the CCP, and other perpetrators. 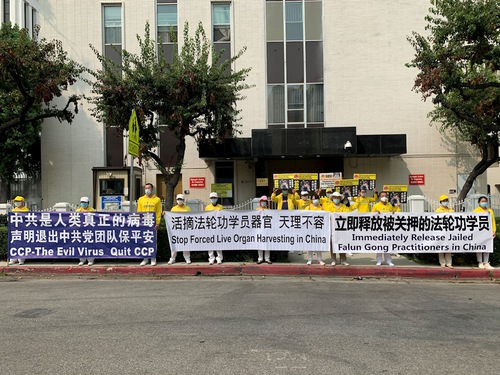 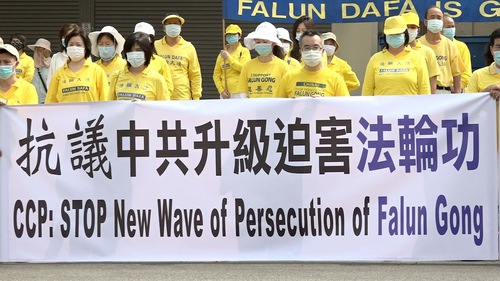 Rally and protest outside the Chinese Consulate in Los Angeles. 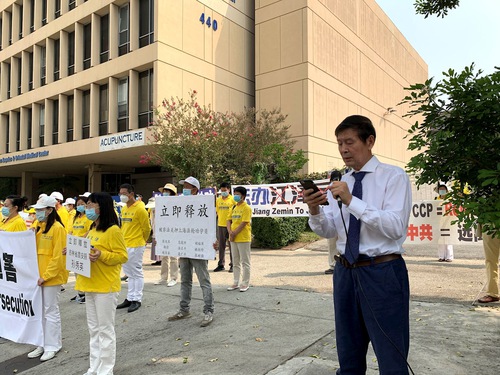 Dr. Li Youfu, President of the US Southwestern Falun Dafa Association, gave a speech at the rally, recounting the numerous crimes the CCP committed against innocent Falun Gong practitioners over the past 21 years. He quoted a Minghui report on Ms. Li Ling’s death two months ago. Ms. Li had been illegally arrested, and taken to an empty house governed by the CCP Branch Secretary of her village. She died after being brutally beaten. Her body was badly bruised.

Dr. Li said that the persecution of Falun Gong continued to escalate, and large-scale imprisonment, brainwashing, and torture had killed and crippled countless Falun Gong practitioners. More astonishingly, their organs had been removed and sold for profit. 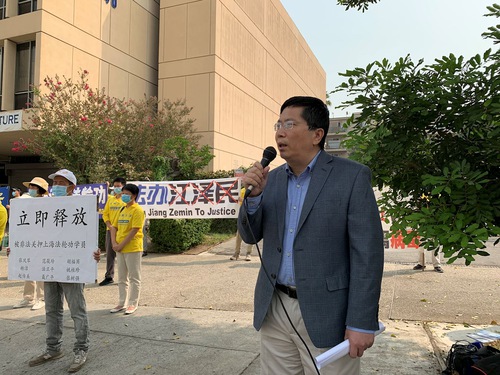 Dr. Wu Yingnian gives a speech at the rally.

Dr. Wu Yingnian, spokesperson for Falun Gong practitioners in the greater LA area, said that the CCP’s persecution of Chinese people had been extended overseas, and its cover-up of the pandemic was an example of the CCP’s damaging the world. “Governments of different countries have realized the distinction between the CCP and the Chinese people and recognized that the CCP is the true anti-China force. The CCP should no longer exist. All members of the party should withdraw and disintegrate the CCP. It’s the only way to bring a bright future and peace to China, and the world.” 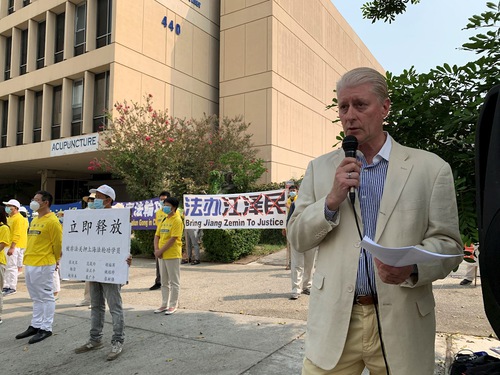 Dr. Dana Churchill gives a speech at the rally.

Dr. Dana Churchill, the U.S. West Coast delegate of Doctors Against Forced Organ Harvesting, said, “The CCP has been found guilty of state-sanctioned, forced, illegal, organ harvesting from living Falun Gong practitioners, and other religious prisoners of conscience in China for the past 20 years.” He said the crime continues and is worsening, as more and more Falun Gong practitioners in China were forced into blood-drawing by the police.

Falun Gong practitioner Xian Jijung spoke about his friend, Jiang Quande, 66, who died on August 26 as a result of the persecution. Jiang’s wife, Sun Xiuying, was also arrested and is currently held at a detention center in Nong’an County, Jilin Province. He said, “I once stayed at Mr. Jiang's for about half a year. He was a very kindhearted and courageous person. He worked hard and selflessly to raise public awareness about the persecution of Falun Gong. After years of torture, Jiang was emaciated, but the local police still arrested him, and he lost his life during this detention. I miss him dearly and highly respect him. I urge the Chinese authorities to release his wife and other Falun Gong practitioners.”

Ms. Wang Jing, also a practitioner spoke at the rally about her husband, Ren Haifei, who recently experienced the persecution in China. She said that “Mr. Ren was brutally beaten after being taken to the Ganjin street police station in Dalian City. His heart and kidneys consequently became very weak, and he was taken to the hospital for emergency treatment.” 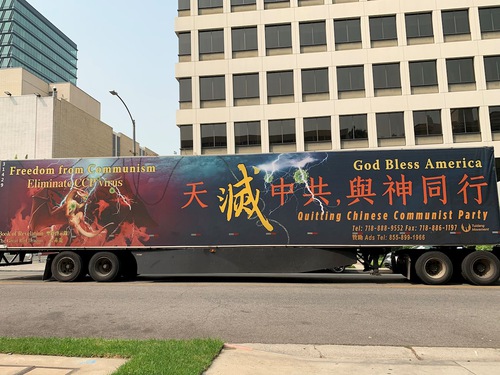 Falun Gong practitioner’s truck circles the Chinese Consulate with a message calling for freedom from communism.

“Looking at “Self” with Clarity, Letting Go of “Self””