(Minghui.org) Falun Gong practitioners in Leipzig, Germany held an information day to talk to residents about the Chinese Communist Party’s (CCP) persecution of the practice on August 22, 2020. 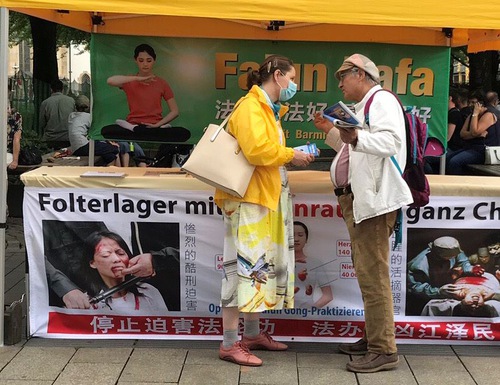 A practitioner tells a passerby about Falun Gong.

Leipzig, located in former East Germany, is well-known for the Monday Demonstrations which played an important role in the ending of the German Democratic Republic (GDR). The demonstrations in Leipzig began on September 4, 1989, after the weekly prayer for peace in the St. Nicholas Church with parson Christian Führer, and quickly developed into non-violent demonstrations in other cities. The number of participants in Leipzig grew from a few hundred to 320,000 despite armed military deployment. The Berlin Wall eventually fell on November 9, 1989, marking the end of the communist regime.

The memory of communism isn’t far for residents of Leipzig. They were still appalled to learn about the atrocities the CCP has carried out on Falun Gong practitioners, especially forced organ harvesting by the communist regime for profit. Many signed a petition calling for an end to the persecution. Some took informational flyers for their family and friends.

A woman told a practitioner that her grandfather taught her about communism’s threat to the world. She believes her courage to stand against communism comes from her strong belief that God ultimately dictates what happens in the world. 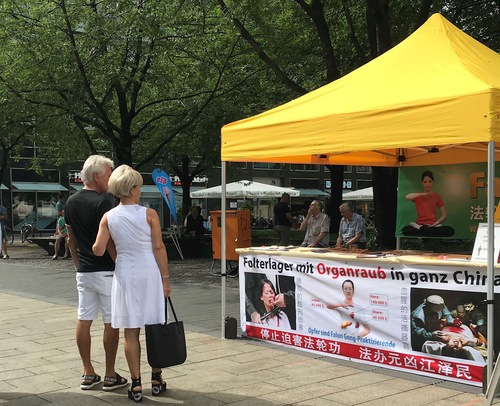 Several people expressed interest in learning Falun Gong and plan to go to the group exercise site. A couple from Berlin signed the petition and asked where they could find a group practice site in their city.

“Validating Dafa by Being a Good Neighbor”