(Minghui.org) Today's news from China includes incidents of persecution that took place in 17 cities or counties in 8 provinces, where at least 53 practitioners were recently persecuted for their belief. 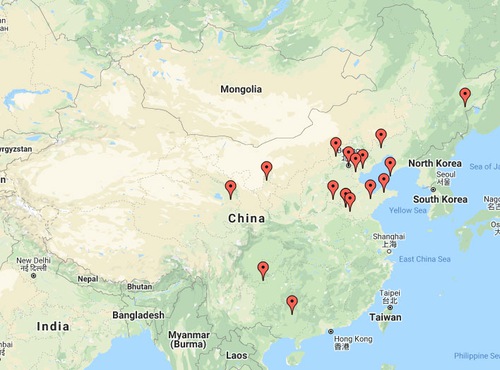 Ms. Chen Qiuxiang of Maying Township was arrested on August 29, 2019. She was constantly harassed after returning home. Her case was brought to the Liangshan County Court. She will be tried on September 8, 2020.

Ms. Qi Gui’e is to serve her term outside prison.

Since the outbreak of the coronavirus pandemic, 20 practitioners have remained in custody in detention centers in Chaoyang City and Chaoyang County. Some practitioners have been held there exceeding the maximum duration as set by law. Their families found officers in charge of the cases and asked for their release. The police still refuse to release them.

List of practitioners detained in detention centers are as follows.

Two officers from the Cuiping Police Station broke into 84-year-old Ms. Sun Xiuting’s home and ransacked the place on August 26, 2020. They confiscated all her Falun Dafa books, printed materials, and a laptop computer.

The Longwangtang Police Station called Ms. Zhang Cui’s daughter on August 20, 2020, and asked why she did not answer the phone call from the procuratorate. They told her to go to the police station to sign paperwork. The daughter refused to go or sign anything; the police threatened to use this against her mother.

Ms. Zhang was previously under residential surveillance by the Gaoxinyuan Police Department. Her case was again turned over to the Ganjingzi District Procuratorate. Ms. Zhang was told to go to the procuratorate to sign paperwork, but she refused to do so.

Wang Jin, Ma Jian, and two other people went to Ms. Zhou Xianfen’s home in Taiping Village, Taiping Town, on July 24, 2020. They told Ms. Zhou, who is in her 60s, to give up practicing Falun Gong. Ms. Zhou refused.

Ma went into her bedroom, looked around, found a copy of Zhuan Falun in her bag hanging by the bed, and took it away.

Mr. Fu Chensheng from Wenquan Township, Haidian District, has been missing since May 2020. So far, no one has heard anything about him or his whereabouts.

People from the Youzha Town government went to the homes of Ms. Zhang Yanling’s parents and her husband’s parents several times to look for her, but did not find her.

They went to her workplace in a supermarket and told her to sign paperwork, which she refused. They threatened that not signing it would adversely impact her work and her children's schooling.

Ms. Guo Sufang from Fangzi District, Weifang City, was arrested on May 7, 2020, for talking to people about Falun Gong in Anqiu City. She was released on bail.

Her son received a phone call, in mid-August, from the Economic and Technological Development Zone Police Station, Anqiu City. He was told that his mother had to go to the police station.

Ms. Guo went there. The police asked her how many practitioners she went out with to tell people about Falun Gong in May. They also demanded to know their names. Ms. Guo refused to answer their questions. Then the police told her to sign a sheet of paper.

Ms. Bao Shenglian was arrested and her home was ransacked by the local Domestic Security officers on August 27, 2020.

Several practitioners have been harassed by their local police stations, neighborhood committees, and workplace personnel since mid-July 2020.

They tried to force practitioners to give up their belief and pay Chinese Communist Party membership dues. They threatened that if they failed to pay the membership dues, their pensions would be suspended.

Two officers from the Dengfeng Street Police Station knocked on the door of Ms. Zhou Huizhu’s home and harassed her several times on August 26, 2020.

They told Ms. Zhou to sign paperwork and threatened to take her to the detention center if she refused to sign.

Zheng Lianyong, Xige Town Party secretary, and a 610 Office agent broke into Ms. Dong Guihuan’s home and harassed her on August 26, 2020. They told Ms. Dong to sign a guarantee statement renouncing Falun Gong. When Ms. Dong refused, they told her that they would come again.

Zheng and three other people broke into Ms. Dong’s home again on August 27. Under escalated pressure and threats by the police station director, Ms. Dong’s husband signed the statement for her and grabbed her hand to press her fingerprint.

Ms. Liu Xiuqin of the Hongqiao District was arrested at home and taken to the Changzhoudao Police Station, Hedong District, by officers from the Hedong Police Department on the afternoon of July 14, 2020.

Ms. Zhang Yilong, 68, and Ms. Li Xiufang, about 50, were reported to the police when they talked to people about Falun Gong on August 26, 2020. Officers from the Dalukou Township Police Station and the Liangshan County Police Department, chased and arrested the two practitioners at their homes. The practitioners’ current whereabouts are not clear.

Mr. Liang Zhongcheng was arrested in the Hexie Residential Community, Liunan District, by officers from the Wulika Police Station around 6 p.m. on August 12, 2020. He was later released on bail.

Eight officers from the Dianshang Township Police Station, Jize County, led by their director went to Ms. Li Fengju’s home in Qianzhuzhuang Village, Zhengxi Township, Yongnian District, and arrested her on the morning of August 22, 2020. She was transferred to the Jize County Detention Center for 10 days of detention.

The director of the Lingnan No. 1 Community, Hualin Sub-district Office, Fuxing District, went to Ms. Jia Wenfang’s home on August 18, 2020.

The director told Ms. Jia to sign a transformation statement. Ms. Jia refused. The director threatened to cancel her qualification for low-rent housing in the upcoming review this year.

Officers from the Chengzihe District Domestic Security Division, the Donghaikuang Police Station, and Donghaikuang Residential Community personnel went to Ms. Wang Yumei’s barbershop and harassed her on August 21, 2020. They took her keys and ransacked her home. They confiscated over 70 Falun Dafa books and paper bills with Falun Gong messages printed on them. Ms. Wang was taken to the Jixi City Detention Center for 15 days of detention.

Mr. Si Xiangchao from Tushanji Village, Maji Township, Jiaxiang County, was arrested on August 11, 2020. His current whereabouts are not clear.

Ms. Yuan Yinglai of Zhuolu County was taking a ride to her daughter’s home in Mentougou District on August 17, 2020. She was intercepted at the Donghuayuan checkpoint in Huailai County when her national ID was checked.

As soon as the officer examined her national ID card, he immediately called Zhangjiabao Township, Zhuolu County. Ms. Yuan was taken back home. Her personal freedom was restricted, and she was not allowed to go out of town again.