(Minghui.org) Falun Gong practitioners in Ireland held a rally on Parnell Street in Dublin on September 4, 2020, to expose the Chinese Communist Party’s (CCP) persecution and support the more than 360 million Chinese people who have joined the “Quit-the-CCP” movement and withdrew their memberships in the CCP and its affiliated organizations. 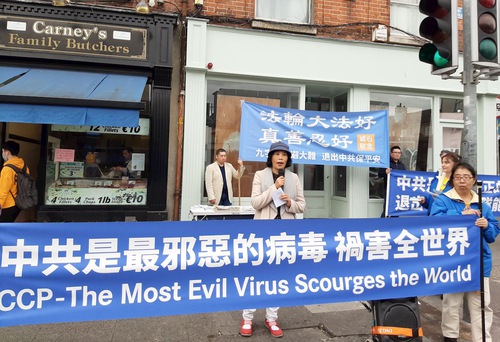 Practitioners held large banners in both Chinese and English that read “CCP – the Most Evil Virus Scourges the World,” “Support 360 Million Chinese Quit CCP,” “Falun Dafa Is Great,” “Truthfulness-Compassion-Forbearance Is Great,” and “Quit CCP to Be Safe.”

Ms. Liu, a Falun Gong practitioner, gave a speech during the rally about how the CCP had covered up the coronavirus pandemic and how it has always lied throughout history. She called on people to see the evil nature of the CCP and not be deceived by its lies.

A representative of the Global Center for Quitting the CCP gave a speech about the significance of quitting the communist organizations. She listed 10 reasons why the CCP couldn’t represent China and hoped the Chinese people would draw a distinction between China and the CCP.

Many Chinese people took brochures about quitting the CCP and information about the pandemic. Some people who were in stores came out to listen to Falun Gong practitioners’ speeches at the rally, and some quit the CCP during the event. 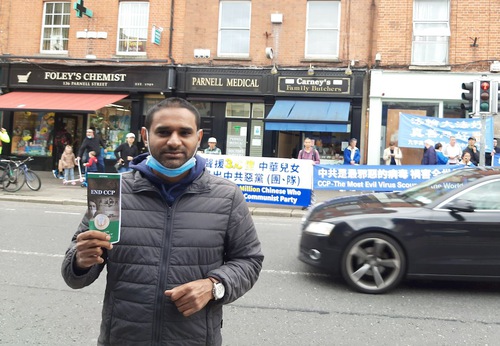 Attiq immigrated to Ireland from Pakistan 15 years ago. He had known about the CCP’s persecution of Muslims and was appalled by the CCP's brutality against Falun Gong practitioners. He called the CCP a demon and said, “The Chinese Communist Party has bought support from poor countries. It’s despicable!”

Malcom, a Dublin resident, said he had seen Falun Gong practitioners’ activities before and had learned about the persecution in China. He signed the petition and asked about websites where he could get more information.

“Turning into a Diligent Cultivator”