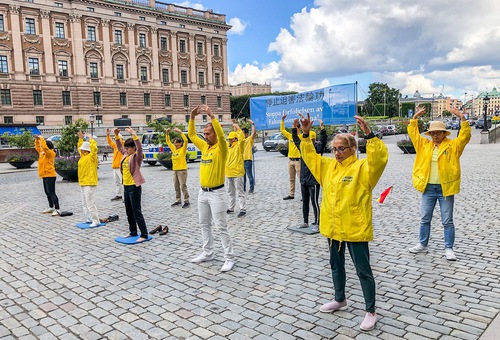 Practitioners demonstrate the exercises on Mynttorget Square next to the Riksdag building in Stockholm on August 28-29, and September 1. 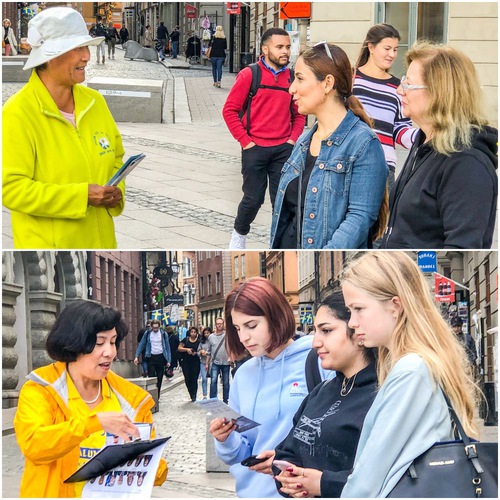 Several people signed the petition to condemn the persecution

A Woman from Iran: “It’s Great to Meet You Today.”

Gulli, an Iranian practitioner, saw three Iranian ladies reading the posters and discussing them on August 28 (Friday). She greeted them in Farsi (the Persian language). One of the women, Frida, said she was excited.

“I just moved to Stockholm from Gothenburg,” Frida said. “I met Falun Dafa practitioners in Gothenburg twice and learned some of the exercises. It felt great. I wanted to contact local practitioners to learn Falun Dafa after returning from my vacation in France. It is great to meet you today!”

She then introduced her two friends, Roya and Sanaz, to Gulli. The women asked several questions about Falun Dafa.

When learning that Zhuan Falun, the main book of Falun Gong, has been translated into 40 languages, including Farsi, all three women ordered a copy of the book. Frida and Gulli made an appointment to have an online group to read the Falun Dafa books and learn more about the practice. 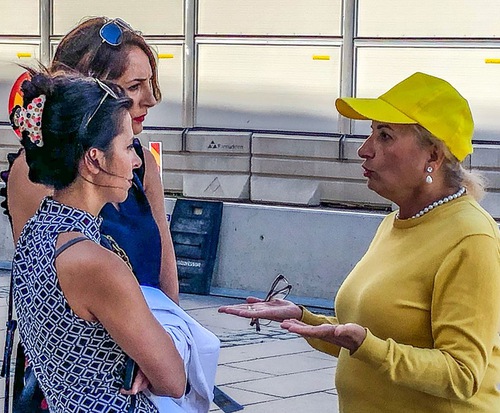 Appalled by the Persecution--“This Is Unacceptable!”

Nina and her mother Isabell from Karlstad in mid-Sweden are interested in qigong, so they stopped and watched the practitioners' exercise demonstration for quite a while. They said they both felt a strong energy field. They were shocked when they read the information about the persecution.

“I cannot imagine that the organ transplant waiting time is so short in China,” said Nina after listening to the practitioners' explanation of Falun Dafa and the CCP’s forced organ harvesting. “Such a large scale killing on demand is too evil and inhumane! This is unacceptable.”

They signed the petition against the persecution. Nina took more fliers so she could introduce Falun Dafa to her friends who are interested in qigong. 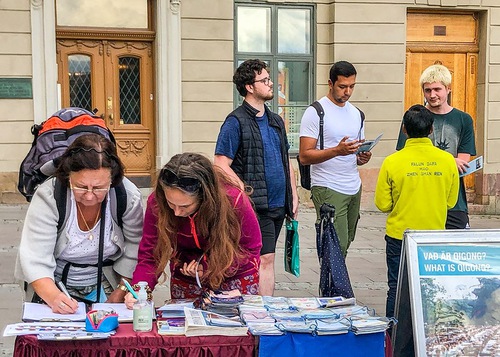 Nina and her mother Isabell

“The European Union Should Not Keep Silent”

A middle-aged woman stopped and read the information about Falun Dafa, the CCP’s persecution, and live organ harvesting. She then signed the petition against the persecution.

“I hope my signature helps stop the persecution as soon as possible,” she said. “ I know the CCP persecutes people who don't agree with it's ideology. Now I find out about the persecution of Falun Dafa! This leads me to think about the CCP’s suppression of Hong Kong people striving for freedom and democracy.

“I understand that the CCP has set up a Confucius institute in Sweden claiming to spread traditional Chinese culture. Its true purpose is to infiltrate western countries and spread its CCP culture. This is unacceptable.”

She called on the Swedish government and politicians in the European Union to take action. She said they should not keep silent to protect their economic interests, instead they should unite to sanction the CCP and stop it from committing wrong deeds.

“Improving Myself as I Helped to Rescue Fellow Practitioners”