(Minghui.org) The persecution of Falun Gong in China began on July 20, 1999. France Culture, a public radio channel and a part of Radio France, carried an extensive report, titled “21 Years of Horror for Falun Gong Followers Due To Chinese Oppression.” 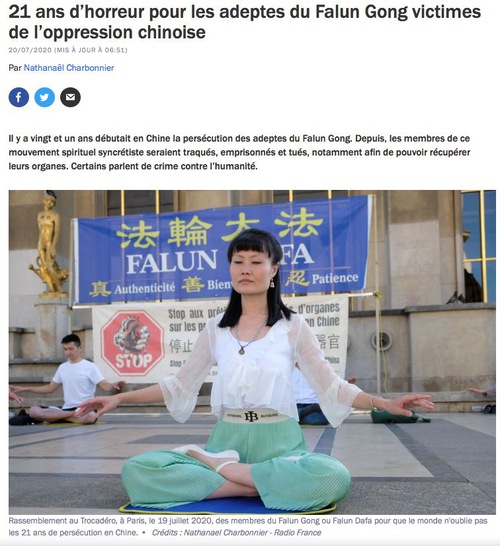 Screenshot of the report on France Culture on July 20

The following has been excerpted from the report.

“Twenty-one years ago, the persecution of Falun Gong practitioners began in China. Since then, the members of this spiritual movement have been hunted down, imprisoned, and killed, in particular in order to be able to recover their organs. Some speak of a crime against humanity.

“To say that Falun Gong practitioners in China are victims of forced organ harvesting is not delusional. Journalists, mainstream media like the BBC, politicians, NGOs like Amnesty International, doctors all over the world say it and repeat it more and more insistently.

“Alexis Genin, a neuroscience doctor says about these acts of persecution with certainty, 'That Falun Gong practitioners are victims of forced organ harvesting is a fact. There are multiple testimonies from relatives of victims. Chinese doctors who participated in these forced collections say so. The only question mark that remains to be proven is the scale of the phenomenon.'”

“What exactly is this 'phenomenon?’ Dr. Harold King of the NGO DAFOH (Doctors Against Forced Organ Harvesting), which has been working on the subject for years, said, 'The world needs to know that this is really forced organ harvesting.'”

“The doctor described the barbarity based on a doctor witness: 'Forced organ harvesting is the removal of all vital organs, whether used or not, from a person who is healthy and alive. And this obviously results in the death of the donor.'”

“The link between Falun Gong and forced organ harvesting began in the early 2000s. It was then that this spiritual movement was banned in China.

“Marco Respinti, a journalist, researcher, and member of the Russel Kirk Center in Michigan, explains that the Chinese Communist Party hates all religions and has classified them into three groups: the red, the gray, and the black.

“'Reds are accepted religions, such as Buddhism or Catholicism,” he explains. “The grays are churches or movements that refuse to join official religious organizations, but they are not necessarily hunted down. The black group is the worst in the eyes of the dictatorship, because it is considered an ‘enemy’ of the Chinese Communist Party. Falun Gong members have been in this category since 1999 and are therefore being hunted and persecuted.'”

“It was not until 2006 that the link was made between the imprisonment of Falun Gong practitioners and organ transplants. Doctor Alexis Genin says, ‘The first testimony came from the wife of a Chinese doctor who fled to the United States and called the press to explain that her husband had harvested organs from thousands of Falun Dafa practitioners.’

“In March 2007, Manfred Nowak, the UN Special Rapporteur on Torture, confirmed torture in China. International lawyer David Matas and former Secretary of State of Canada David Kilgour then conducted a careful investigation on the same subject. We can also add the vote by the European Parliament in 2013 of a resolution condemning the forced harvesting of organs authorized by the Chinese state.

“In fact, the number of transplants increased in China from that time on, that is to say at the beginning of the 2000s. But most disturbing is that, at the same time during this period, a juicy market for organ donations and transplants, estimated at several billion euros each year took off in China.

“We are talking about 90,000 transplants per year (a figure derived from projections that are difficult to verify), with extremely short waiting times for recipients. However, specialists know that a patient waiting for an organ must be patient before being transplanted. This can sometimes take months or years. But not in China, where it is strangely possible to find a liver, kidney, or heart in record time. This is thanks to a ‘stock of organs,’ in this case those that come from members of Falun Gong.”

“We are far from the small mafia networks of organ trafficking that exist in Mexico or in certain Eastern European countries. They make money selling a kidney here or a cornea there. In the case of Falun Gong, it would be a large-scale persecution and trafficking directly organized by a state, namely China and its dictatorship.

“Françoise Hostalier, former Secretary of State and Member of the French National Assembly, said, ‘To my knowledge, the only political regime that has ever done this in the history of mankind is the regime of the Nazis.’

“And Françoise Hostalier said that we must finally open our eyes to our relations with China.”

Falun Gong Is a Movement

“Falun Gong is also called Falun Dafa. It is a mixture of meditation linked to slow and flexible exercises. It is based on three principles: Truthfulness, Compassion, and Forbearance. We can sometimes see the followers of this movement practicing their discipline in parks or in certain places in cities.

“Falun Gong was born in the early 90s, initiated by Li Hongzhi. Initially, this movement was supported by the Chinese authorities. But facing its expansion—we speak of 60 million practitioners in the mid-90s—the communist dictatorship feared and changed its attitude. It began the persecution and framed the school as a cult.

“‘However,’ explains MP Frédérique Dumas, member of the Foreign Affairs Committee at the National Assembly, ‘this is not the case. For me, Falun Gong is absolutely not a cult. There is nothing in the practice of Falun Gong to suggest this. These people believe in truthfulness and the harmony of the Earth.’

She added, “A cult is when you try to manipulate people to get money from them. Falun Gong is free.” She concluded by recalling that, in France, Falun Gong is absolutely not considered a sect.

“Falun Gong has never been considered by Miviludes, the Interministerial Mission for Vigilance and the Fight against Sectarian Abuses, as a sect.”

“Hebei Teacher Tried for Her Faith, Family Intimidated for Seeking Justice for Her”