France: Support for Falun Gong at the Eiffel Tower

(Minghui.org) There were many tourists at the Plaza of Liberties and Human Rights on August 16, 2020 thanks the plaza providing the ideal location for viewing Paris's iconic Eiffel Tower. 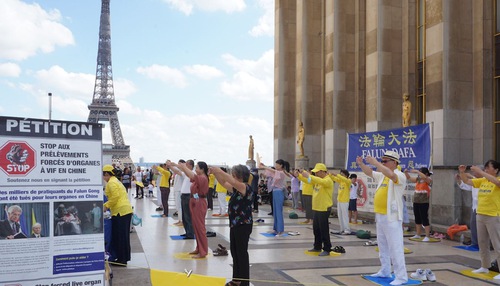 Practitioners hold activities at Paris’s Plaza of Liberties and Human Rights to raise awareness about the ongoing persecution in China. 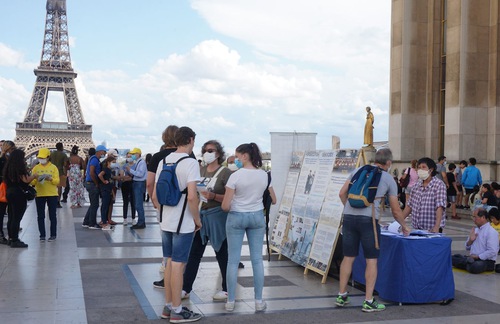 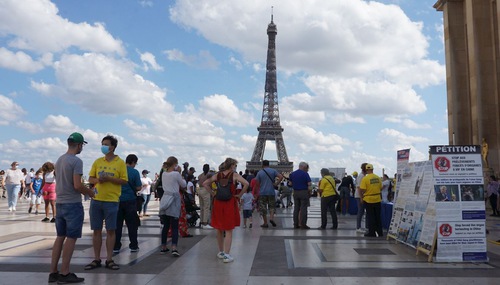 Many people were drawn to the Falun Gong display. 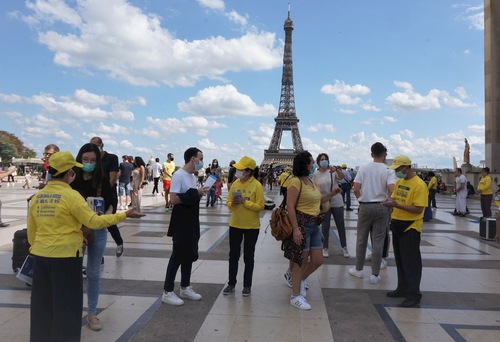 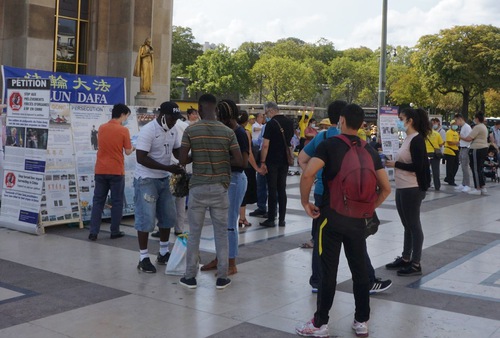 Tourists stop to learn about the persecution. 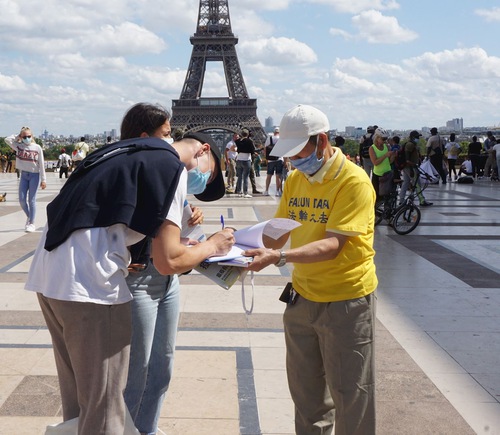 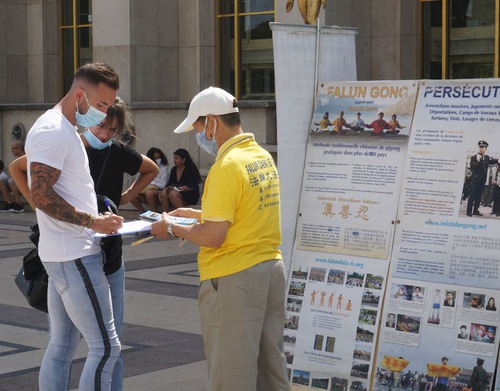 Tourists sign a petition calling for an end to the persecution. 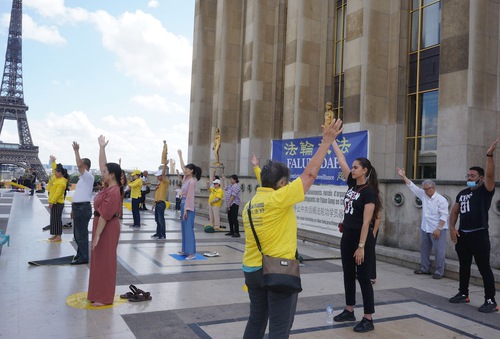 A woman named Mergem Zerguit, who is studying accounting, and her husband, Ali Bauyaite, who works in the IT industry, stopped by when the exercise music caught their attention. They then joined the practitioners in doing the exercises. Ms. Zerguit said, “The exercises are very relaxing. I felt a great energy field. We hope to find a practice site near where we live so that we can do the exercises every week. I’m really glad to have this opportunity to learn the exercises.” 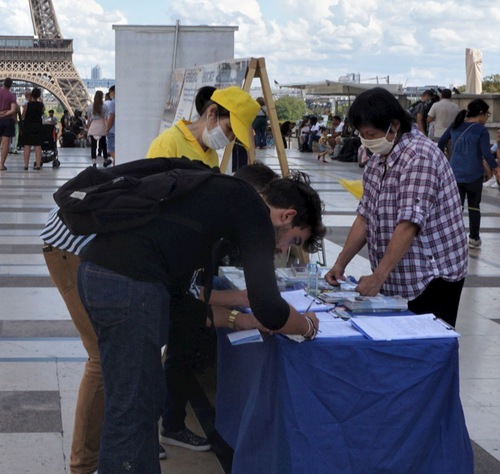 Friends Alex Delin and Jérémy Torregrosa signed the petition calling for an end to the atrocities in China.

Alex Delin is a businessman in Paris who signed the practitioners’ petition after reading the display boards. He said, “I didn’t know about this practice but a person was incarcerated for a decade after starting to practice Falun Dafa. He was brutally tortured and his organs harvested without consent. I cannot see something like that happen without doing anything.”

A friend of Alex’s, Jérémy Torregrosa, added, “I only just learned today that one can be imprisoned for doing a meditation practice. Yet he did not harm anyone. It makes me feel very sad that torture and organ harvesting is happening in China.”

Mr. Wang Longmeng hails from China and was forced to flee overseas because of his involvement in the 1989 Tiananmen Square student demonstration. He was at the Plaza of Liberties and Human Rights that day and said, “To me, Falun Gong is a form of religious belief. China’s constitution allows religious freedom but in reality any organizations more powerful than the Chinese Communist Party will be suppressed. I saw this in 1999 when Jiang Zemin was in power. I was in America then. My friends in the U.S. who also participated in the 1989 student protest and I have supported Falun Gong activities.”

He told practitioners he is a Buddhist and he also got to know about Christian teachings during his time overseas. “I can relate to the teachings of Falun Dafa – Truthfulness, Compassion, Tolerance. The Chinese Communist Party (CCP) has no reason to outlaw them, the suppression is ruthless. Organ harvesting has gone beyond the bottom line of humanity and is intolerable.” He said he has been supporting Falun Gong all these years. “A group of us who were victims of the June 4th massacre have passed away. Those who are alive are still fighting for democracy in China. Falun Gong as a group is the most resilient.” He thinks that given the current situation in China and internationally, it is inevitable that the CCP will collapse, “This is thanks to Falun Gong. It is the result of their longterm efforts in resisting the persecution.”

A man named Alain who is a legal expert signed the petition to stop the organ harvesting after reading the practitioners’ displays. “Taking one’s organs without consent and putting a price on every part, this is murder! And it is killing a healthy person; it’s terrible. What kind of doctor would do such a thing?” He was stunned when he learned that the organ harvesting was sanctioned by the CCP. “I really can’t understand such a peaceful practice... not harming anyone... why is it banned? Their organs removed and sold for a profit? I must sign the petition to stop such atrocities.” He took some informational literature with him, saying he would definitely read it.

A woman named Sandrine who works in the medical sector, as well as her husband, signed the petition. “I sign this because no matter who you are, French, Chinese or whatever nationality, people should have democracy and freedom,” she said. “I know China is a communist country but from what I see today, this is like yoga; it does not cause any harm to others or society. I think the Chinese government should give people freedom to practice this.”