(Minghui.org) When the British government loosened the social distancing policy related to the coronavirus pandemic, Falun Dafa practitioners in Cornwall, a county in southwest Britain, resumed their outdoor activities. In addition to doing the exercises together at Morrab Gardens in the town of Penzance, they also talk to passersby about Falun Dafa and let people know how it is being persecuted in China.

Group Practice Site in the Community

Morrab Gardens is a municipal garden that has been open to the public since 1889. In 2007, Falun Dafa practitioners began doing the exercises there and introducing the practice to the community. After the British government adjusted the social distancing policy on May 13 allowing for outdoor activities, Yukari and Rose returned to the park for group practice. They also offer free Falun Dafa classes from 8 to 9 a.m. every Saturday and Sunday. 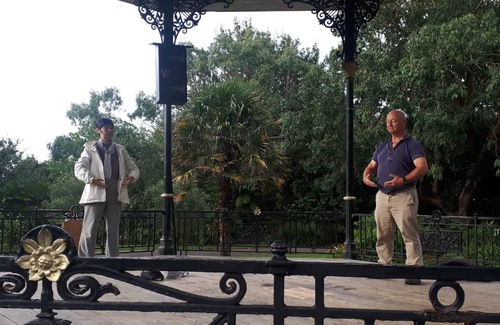 Local practitioners Yukari and Trevor do the exercises in Morrab Gardens. 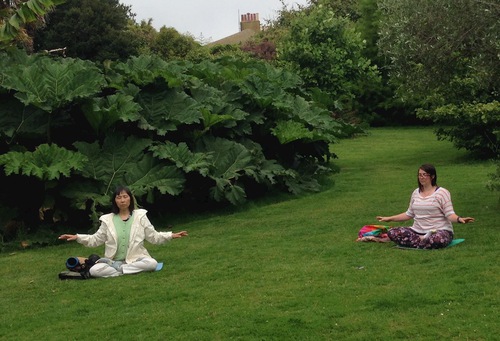 Yukari and Rose (right) do the Falun Dafa exercises in Morrab Gardens.

As a result of the stay-at-home order during the coronavirus pandemic, people are now more interested in learning the Falun Dafa exercises, according to Rose. Several passersby took information about Falun Dafa and asked about the persecution in China.

A Call to End the Persecution

In July, Derek Thomas, a member of the British Parliament for St. Ives, joined the other 600-plus members of the Inter-Parliamentary Alliance on China to issue a joint statement condemning the severe human rights violations against Falun Dafa practitioners in China. The Alliance (IPAC) is an international cross-party group of legislators hailing from over ten democratic countries, including the U.S., the U.K., Canada, Australia, Japan, Germany, and France.

Part of the statement reads: “Twenty-one years ago the Chinese Communist Party began a campaign of persecution against Falun Gong practitioners.” “[The campaign] has resulted in the imprisonment of hundreds of thousands of its followers, where they have been subjected to some of the most severe forms of torture.”

The statement also mentioned forced organ harvesting from living practitioners in China: “Evidence of forced organ harvesting in China emerged 15 years ago, and an independent and rigorous legal project—the China Tribunal—last year found beyond reasonable doubt that this practice had been perpetrated on a widespread, state-sponsored, and systematic level.” The statement urged the world to stand up and speak out for an end to this repression.

Yukari said she contacted Mr. Thomas in June about the statement and explained Falun Dafa to him. Thomas responded quickly with the signed statement and thanked practitioners for their contributions to the community.

Sheila, who works at a university in London, came to the park on July 12. Impressed by the peaceful meditation, she learned the movements. “These exercises relax me—they are truly wonderful,” she said. 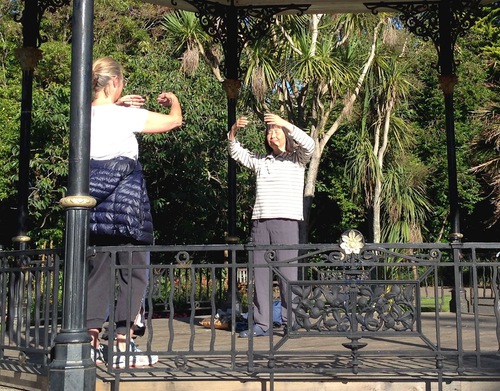 Having seen practitioners raising awareness about the persecution in front of the Chinese Embassy in London, Sheila believes that Falun Dafa's principles of Truthfulness-Compassion-Forbearance represent universal values. She said the persecution is a threat to mankind.

Debra from Newlyn in Cornwall had met Yukari before at Sancreed Beacon, a nearby Bronze age archaeological site. She was glad to learn more about Falun Dafa and said, “The world needs Truthfulness-Compassion-Forbearance.”

“So Fortunate to Be a Falun Dafa Practitioner”