(Minghui.org) “The principles of Falun Dafa are amazing and should be practiced by everyone. I signed the petition to support human dignity,” Karoline Müller told Dafa practitioners at the Falun Dafa information booth on Hohenzollern Platz in Munich on August 21, 2020.

Falun Dafa (also known as Falun Gong) is an ancient Chinese practice that guides people to improve their moral standards by following the principles of Truthfulness, Compassion, and Forbearance. The Chinese Communist Party (CCP) launched the persecution of the practice in 1999 and since then, untold numbers of practitioners have died for refusing to renounce their faith.

Dafa practitioners in Munich often hold events to raise awareness of the ongoing persecution in China, a brutal suppression that has lasted more than 21 years. Many passersby, after learning about the atrocities taking place in China, signed a petition demanding an end to the persecution. 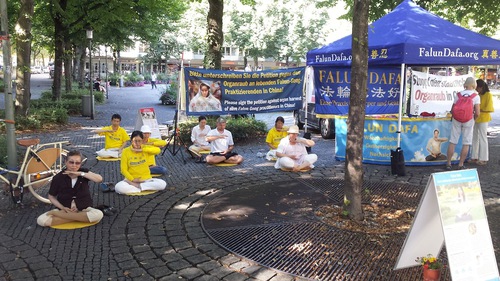 Practitioners on Munich's Hohenzollern Platz on August 21 raise awareness of the 21-year-long persecution of Falun Dafa in China. 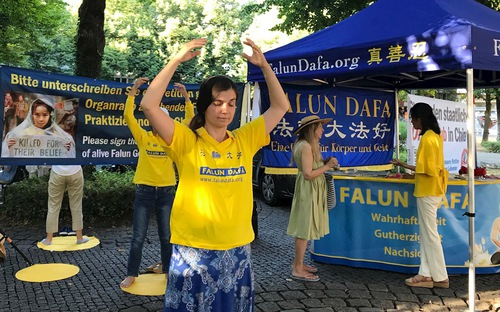 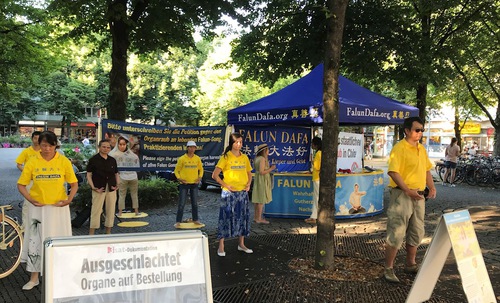 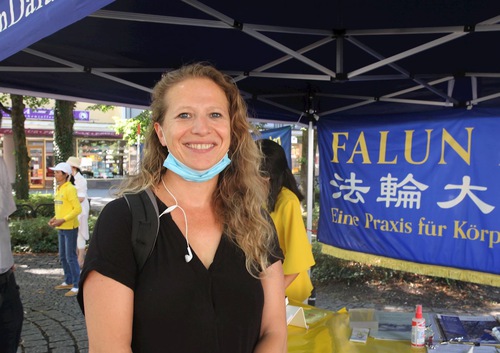 Karoline Müller, a social worker, says that the principles of Falun Dafa – Truthfulness, Compassion, and Forbearance – are amazing.

Karoline Müller is a social worker. When she heard how the CCP has persecuted Falun Dafa practitioners over the past 21 years, she called it “unbelievable and terrifying.” She said that money rules the CCP and greed will lead the Party to its destruction. She told practitioners, “It’s great that people like you exist and devote yourselves to letting more people know about Falun Dafa and the persecution.” 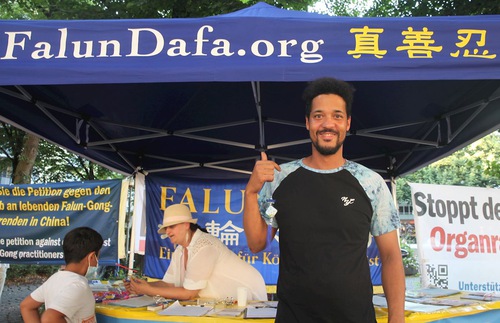 Journalist Marcel Wegener shows off the lotus flower he was given. The tag attached to the flower says, “Falun Dafa is good.”

Marcel Wegener is a journalist, editor, and media host. He said he knew about the persecution of Falun Dafa in China and told practitioners that he enjoyed reading the Epoch Times newspaper. “I signed the petition because I am a human being,” he said. He added that it pains him to know what people on the other side of the earth suffer just because their country made them into political targets. “Germany and Western Europe always condemn China for its human rights record but never do anything to change it,” he remarked. Wegener believes that practitioners' activities to let people know what is happening in China are good. “This is why I try my best to support your activities,” he said.

Commenting about the CCP’s systemic harvesting organs from living Falun Dafa practitioners, Wegener said, “It's like picking fruit or animals on a farm. It’s absurd! The people who run the Chinese government are animals; they don’t have any sympathy or wisdom.”

As soon as Wegener learned that the CCP tries to ban people from practicing Truthfulness, Compassion, and Forbearance, he said, “What is going on? It’s illegal to be a good person? … It reminds me of the book 1984 by George Orwell. In the book, everything was abolished: history, monuments, humanity. We can’t let these things happen.” He was worried that Germany was very close to the state described in Orwell's book. “We can’t let it spread here from China, we can’t provide a platform for such activities. The world must stop these things from spreading by eradicating them.”

Wegener believes that Falun Dafa’s principles of Truthfulness, Compassion, and Forbearance “are very important to the world right now.” “Truthfulness and compassion are the foundation of mankind. Forbearance is what the Chinese government lacks. These principles are what differentiate us humans from animals.”

A retired architect who stopped to talk to practitioners said he believed that the CCP was capable of torturing practitioners and harvesting their organs. He said that German politicians and businessmen still hope to rely on and profit from the Chinese market. “The so-called economic gains are like narcotics. The CCP sells narcotics to Germany to get Germans addicted so that it can destroy Germany however it wants.”

Earlier in the day, before the practitioners finished setting up their booth, a man walked up and asked, “Where can I sign the petition? Please hurry and let me sign because I am late!”

A woman who read the posters and signed the petition shared, “It makes me sad and I want to cry when I think about the persecution.” She thanked the practitioners for their efforts and chatted with them for a long time.

“How I Came to Practice Falun Dafa”