(Minghui.org) Today's news from China includes incidents of persecution that took place in 22 cities or counties in 11 provinces, where at least 38 practitioners were recently persecuted for their belief. 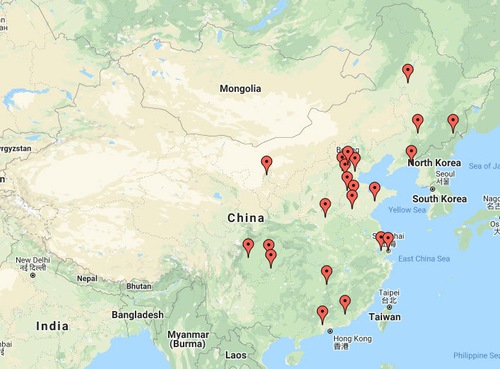 Ms. Du Fengqing of Chengdu City was arrested by seven or eight plainclothes officers on the morning of July 25, 2020. The officers were from the Qinglong Police Station. They followed her to her home, arrested her, took her to the police station, and interrogated her until 10 p.m. before they released her.

Practitioner Li, gender unknown, who was visiting Ms. Du’s home, was arrested at the same time. Li was released on July 30, 2020.

Ms. Lu Guifen of Laishui County was arrested at home on August 5, 2019. She has been held in the Baoding City Detention Center since then.

Ms. Lu will be tried in the Baoding Court on August 4, 2020. Her family hired a lawyer to defend her innocence.

Ms. Jing Jianqiu and Ms. Zhou Xiyun of Zhengzhou City were arrested at Ms. Jing’s home by officers from the Guangwu Police Station, Xingyang City on July 24, 2020. Ms. Jing's home was ransacked. The practitioners are being held at the Gongyi City Detention Center.

Ms. Li Linglian of Meizhou City, in her 60s, was arrested on July 14, 2020. Her home was ransacked. She is being held in the Meijiang District Detention Center.

Mr. Yue Changfu and his wife Ms. Tang Licui who live in Mianshan Town were phoned by someone from the Miaoshan Police Station on July 1, 2020. The caller demanded they report to the police station and sign documents. They refused. Ms. Tang Liqin in Miaoshan Town received several harassing phone calls.

Ms. Wang Xuezhen, 76, of Guangzhou City, has been imprisoned for over a year. She has suffered severe lumbar spine pain in the last two months and has difficulty walking.

Ms. Wang was arrested by officers from the Public Transportation Police Department on July 9, 2019. She was held first in the Guangzhou First Detention Center, then transferred to the Haizhu District Detention Center at the end of February 2020. She has been detained for over a year.

She was tried in the Haizhu District Court on January 3, 2020.

Mr. Chen Zengmin and Ms. Chen Shuanling from Tianjin came home on July 21, 2020. As soon as they opened the door, four officers hiding on the staircase dashed in, and ransacked the place. They arrested them, held them in the Shengli Police Station, and recorded them. They were released at 2 a.m. The following afternoon, officers interrogated Ms. Chen, audiotaped her, and confiscated her bike.

Ms. Liu Suyan of Renqiu City was arrested by officers from the Zhonghua Road Police Station on July 30, 2020, after someone reported her when she talked to people about the persecution of Falun Gong. Police made her take the detention center entry physical exam on July 31. When she failed she was released.

Ms. Xu Xiaolan of Huaying City was arrested by Huaying City police on February 28, 2020. Her home was ransacked. She will be tried on the morning of August 4, 2020.

Ms. Wang Xin of Beijing was reported when she posted Falun Gong flyers on July 12, 2020. Officers from the Pingxifu Police Station ransacked her home, confiscated her computer, cellphone, and Falun Gong materials. She is under surveillance 24 hours a day and not allowed to leave home.

Ms. Xiong Qingzhi, Mr. Cao Guanghua, and Ms. Li Zhengmei of Chongqing were arrested by plainclothes officers on July 22, 2020. They were taken to the Huaxi Police Station. Their homes were ransacked. Ms. Li and Mr. Cao were released at 11 p.m. Ms. Xiong was taken to the Banan Detention Center and detained the next day.

Ms. Zhao Manlan of Beijing was arrested on July 19, 2020. Her whereabouts are unknown.

Ms. Wang Suqin of Beijing was arrested at home on July 30, 2020. Officers from the Wenquan Police Station knocked on her door. She did not open it. The officers had a locksmith open the lock. They arrested Ms. Wang, ransacked her home, and seized her Falun Gong books and other properties. Ms. Wang was taken to the police station and forced to a undergo nucleic acid test. She was detained in the Haidian District Detention Center.

Mr. Zhao Wenjie from Beijing disappeared on July 31, 2020, when he talked to people about the persecution of Falun Gong in Doudian Town, Fangshan District, Beijing.

Ms. Gao Lingling, 72, from Shanghai, was arrested on July 28, 2020. She was released the same day. After that, agents from the local neighborhood committee and Comprehensive Management Office of Gaoxing Town Government harassed her at home and demanded she sign a guarantee not to practice Falun Gong. Ms. Gao refused.

Ms. Yang Qignbo was taken to the Zhenan District Procuratorate by officers from the Jiuliancheng Town Police Station on the morning of July 30, 2020. The officers submitted her case to the procuratorate, but it was rejected because of insufficient evidence. Ms. Yang returned home but is being monitored by the Mashi Border Security Police Station.

Mr. Yang Tingxian of Pingxiang City was sentenced to 18 months in prison by the Luxi County Court on July 10, 2020. He was released from a detention center in February due to his high blood pressure and is now under house arrest. After being sentenced, he was taken to a hospital for a health exam. Although he still has high blood pressure, officers from the Anyuan Police Station took him to a detention center. The detention center did not admit him after he failed to pass the physical exam. They had to release him.

Mr. Rui Kerong of Yanji City was arrested at home on the evening of August 1, 2020. Details are unknown.

Ms. Shang Shuqin was arrested on July 31, 2020. Under the direction of the Longshan District Court, officers from the Dongji Police Department deceived Ms. Shang into going out and then arrested her. She was taken to a hospital for a nucleic acid test and was then taken to a detention center. The detention center refused to admit her because she failed the physical exam.

Ms. Xiu Yanhua was harassed at her father's home by director Liu and others from the Damin Police Station on July 30, 2020. The officers demanded to know if she still practiced Falun Gong, had Falun Gong materials, or was in contact with other practitioners. They videotaped her.

Mr. Kong Lingpo of Qufu City was arrested and taken to the Dongzhuang Police Station at noon on July 29, 2020, after someone reported him when he talked to people about the persecution of Falun Gong. His home was ransacked. His Falun Gong books, video recorder, audio recorder, discs, cell phone, and other properties were confiscated. Police also took his wife to the Xiaoxue Police Station. They interrogated her before they released her.

Mr. Kong is being held in the Sishui County Detention Center.

Ms. Yu Dezhen of Shizuishan City was arrested by Tian Huizhi, Ma Xinhong, and other officers from the Huinong District Domestic Security Division on July 27, 2020. She is being held at a detention center.

On July 22, 2020, the Gaomi City Police Department and its police stations raided practitioners' homes and arrested them and their family members, including non-practitioners and children as young as eighteen months old. Thirty-eight people are confirmed to be arrested so far.

Ms. Mao Yongfang, her husband, and her daughter were arrested at home by over 20 officers on the early morning of July 22, 2020.

Mr. Tang Zhengmin, who had a store in the Gaomi City Technical Market, was arrested by seven or eight officers from the Furi Police Station after 8 a.m. on July 22, 2020. The officers then went to his fiancee, Ms. Du Xiaoyan’s office, and arrested her. Four officers went to Mr. Tang’s home around 9 p.m., ransacked the place, seized over 6,500 yuan with information about Falun Gong, cash worth 200 to 300 yuan, and other properties.

Ms. Zhang Xiuhua and her husband were arrested after 6 p.m. on July 22, 2020. Their home was ransacked. They were held in a police station for four days and three nights before they were released on bail. Police demanded 20,000 yuan. Her husband negotiated and paid them 5,000 yuan.

“Helping with Local Coordination to Expose the Persecution”

“A Policeman Helps Out a Falun Gong Practitioner”