(Minghui.org) Falun Dafa practitioners in Switzerland held information events in Basel, Zurich, and Bern on August 14 and 15, 2020. Their exercise demonstrations attracted many passersby who were curious to learn more about Falun Dafa. When they read about the persecution in China, many were shocked to find out that organs were taken from detained practitioners without their consent and sold for profit. Several people signed the petition to call for an end to the persecution and took home pamphlets to learn more.

Practitioners held activities at Marktplatz in Basel’s busiest district on the afternoon of August 14. Situated in front of a major tram terminal in the city, the information booth was seen by many passengers waiting to catch a tram.

Practitioners set up information boards that provided a history of Falun Dafa, showing how the practice became popular and that Falun Dafa is now practiced in more than 100 countries worldwide. Despite its popularity, China is the only country where Dafa practitioners, who live by the principles of Truthfulness, Compassion, and Forbearance, have been persecuted for 21 years. 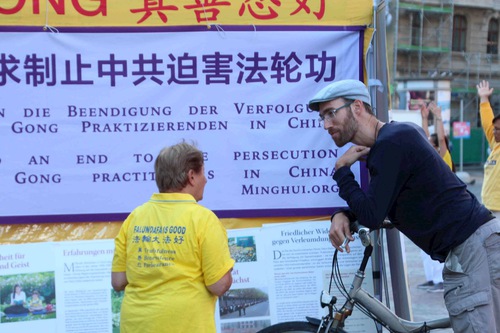 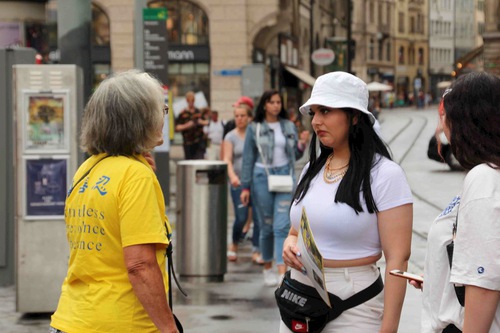 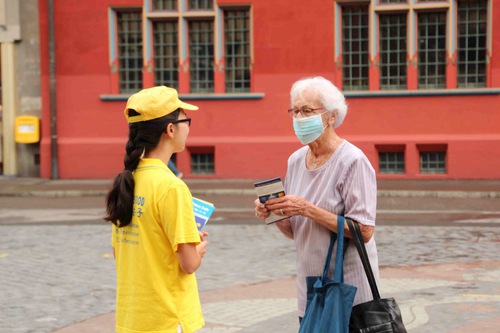 Passersby stop to learn more about Falun Dafa at Marktplatz in Basel. 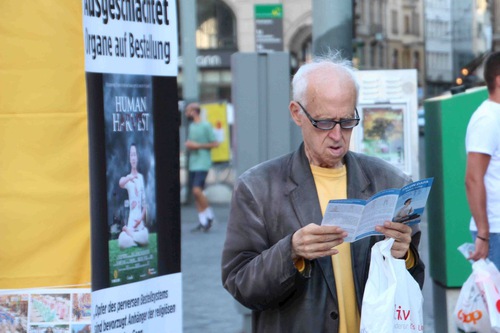 Many people were shocked to learn of the Chinese communist regime’s inhuman treatment of Falun Dafa practitioners. 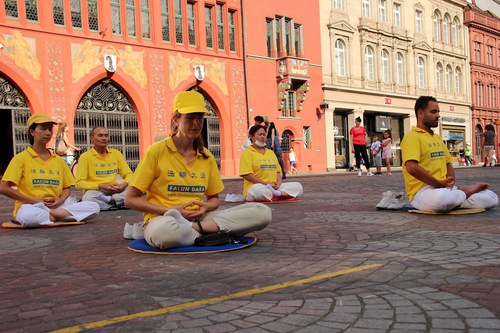 Another visitor seemed pleased to take a brochure, but his joy turned to horror when he learned about the organ harvesting. He exclaimed that this was a betrayal of the Creator and that such crimes should not be allowed to continue. After signing the petition, he added, “The efforts of one person are negligible, but if everyone joins forces, it will be formidable.”

Ruth, a retired biologist, has read a great deal on China since the coronavirus outbreak. She said she learned about the regime’s all-encompassing surveillance. Ruth explained that she usually doesn’t sign petitions, but she wanted to condemn the persecution of Falun Dafa and call on the Swiss government to help stop organ harvesting because “at the very least, this issue should be discussed openly.” She said, “I’m following my conviction by signing this. I still have hope, courage, and the power to do what I think is right.”

Ruth said that she’d read about Falun Dafa in the newspaper. “Falun Dafa is an excellent cultivation method that helps one balance mind and body,” she said. Then she added, “Everyone is searching for the truth and they should be guided by God to find their own path. Sooner or later they will find it.”

She couldn’t understand why the Chinese Communist Party (CCP) is persecuting practitioners. “This is terrible,” she said. “Why are they incarcerating practitioners? These people are peaceful and simply doing a beautiful form of exercise in the park. How can one oppose something like this? The CCP just doesn’t care what you or I think, what are our needs are, or a person's spiritual path. It prevents people from discovering the principles of the universe, from following God. It is destroying human nature through human means. This is wrong.”

Alexander, a manager in a software development company, read the information boards, chatted with practitioners, and signed the petition. He said, “Falun Dafa keeps one fit and healthy. It has no political agenda. But it promotes the improvement of moral character and that goes against communist ideology. Organ harvesting shouldn’t take place. Making money out of a human body, selling organs simply because of differences in belief—such actions should be strongly reprimanded from a moral perspective. It is extremely despicable,” he said.

Alexander believes that the Swiss government should not let the CCP get away with such crimes against humanity. “One’s dignity should be respected. Most people in the world abide by certain moral principles. This has nothing to do with who is in power or what faith you have. To uphold human dignity, I hope the Swiss government will work with other supporting forces to bring about a historic movement. If more governments raise their concerns, the pressure would be enough and we would see results.

“The CCP doesn’t let people think for themselves and persecutes them. You cannot find much of China’s rich cultural history in China nowadays. How sad. Before, you could find it in Hong Kong, but this is not the case anymore. Only in Taiwan, Japan, or even in Europe, Switzerland, and America. Only outside of China can you see it. It is truly a pity, destroying one’s own culture,” he said.

“Everyone Should Practice Falun Gong”

Practitioners held an information day at Limmatquai in Zurich on August 15. 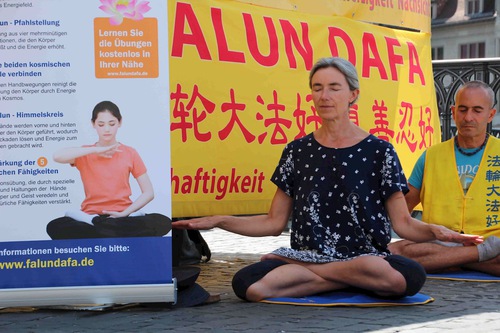 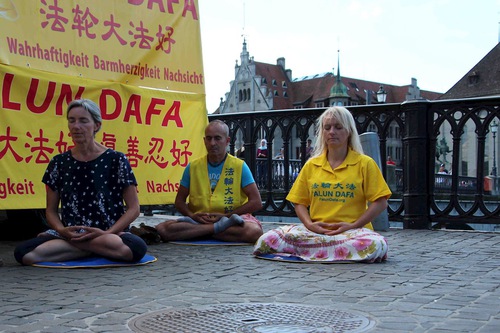 Practitioners demonstrate the exercises by the Limmat River in Zurich. 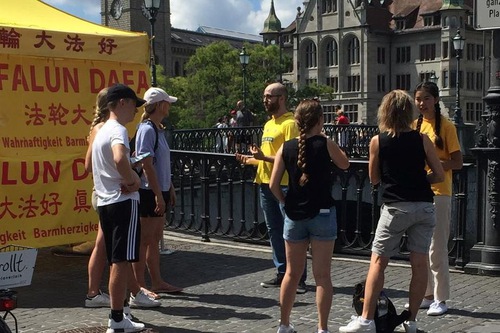 Talking to people about the persecution in China

Several people in Zurich had already heard about Falun Dafa and asked if they could sign a petition. A tourist from Poland said he often travels to Hong Kong for work and already knew about the brutalities committed by the Chinese regime. He told his friend about it and they listened as practitioners gave them further details about the persecution.

A young man said, “This is crazy,” after reading the information on organ harvesting. He signed the petition to show his support and asked for brochures, saying he would spread the word. “Many think organ harvesting is just one case, perhaps two or three cases a year, but I know this is not true,” he said.

A woman riding home on her bicycle stopped for a flyer and then asked about the organ harvesting and the persecution. After signing the petition, she noted down the address, time, and days of practice sites in Zurich, expressing an interest in learning the exercises. Other people also showed interest in taking up the practice.

Isabel, who works in the health care industry, had learned about Falun Gong through a friend who is a practitioner. She said, “Falun Dafa is incredible. Everyone should learn it. The teachings would improve the quality of our lives.” She hoped that, by signing the petition, “this will stop this massacre in China as well as the organ harvesting. This is so shameless—it must not go on. It is a disgrace. I hope the government will do something about it.”

Grateful to Learn about Falun Dafa

Practitioners erected a bright yellow tent outside the train station in Bern on August 15. While they were still setting up, a woman stopped by and took a brochure to read. She waited until the practitioners were finished setting up the tent and then spoke to them for a long time. She said that she coordinated an organization to oppose large scale killings and understood how difficult it must be for practitioners to resist the persecution. She thanked them for their efforts.

Several people stopped to chat with practitioners and thanked them for holding the information day. Some asked where they could learn the exercises. Several came to the practice site the following day. 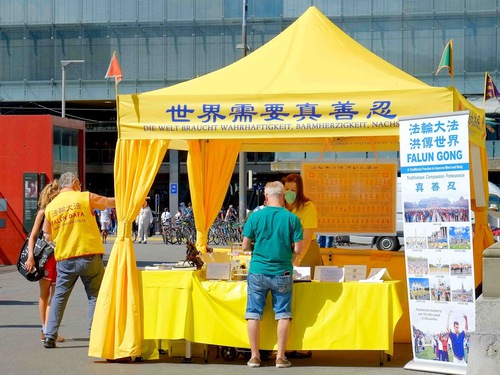 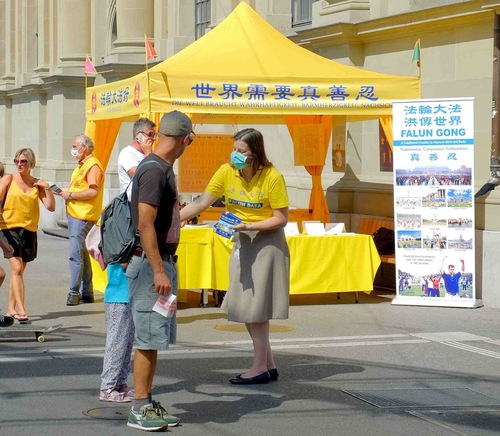 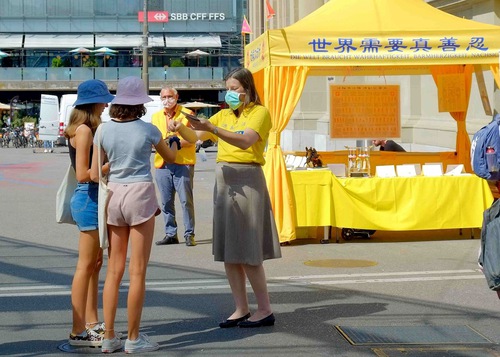 Many people stopped to learn more about Falun Dafa and thanked practitioners for providing an opportunity to hear about the practice and the persecution.