(Minghui.org) Falun Gong practitioners from the provinces of Quebec and Ontario, Canada, held a rally at Place D’Armes in Montreal on August 8, 2020, to support the more than 360 million Chinese people who have quit the Chinese Communist Party (CCP) and its affiliated organizations. 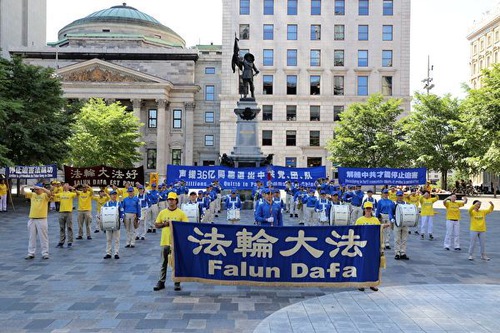 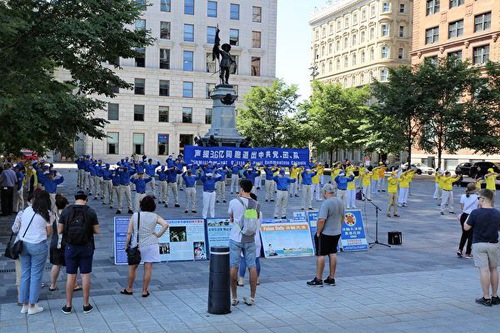 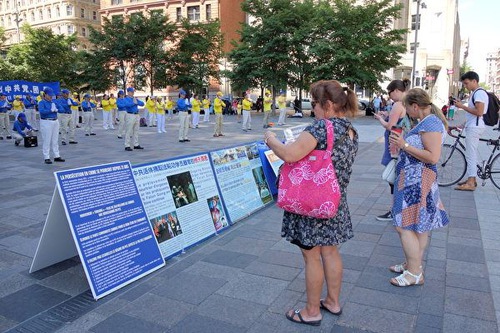 At the event, practitioners did the Falun Gong exercises and the Tian Guo Marching Band played several pieces. They held large banners that read: “360 Million People Quit Communist Organizations,” “Falun Dafa Is Good,” and “The CCP Is Doomed.” Exhibition boards at the front displayed the CCP’s crimes of harvesting organs from living Falun Gong practitioners and its cover-up of the coronavirus pandemic. Many people stopped to show their support for Falun Gong.

Ms. Yang from the Tuidang Center (a volunteer organization that helps Chinese people quit the CCP) in Montreal said that the CCP feared people seeing its true colors, how it covered-up the pandemic, and how it is restricting freedom in Hong Kong. “The CCP won’t be able to escape its fate. It will collapse. Falun Gong practitioners hope Chinese people will take this fleeting chance to quit the communist organizations.”

Mr. Pei, a Christian immigrant from China, spoke at the rally. “The Communist Party is nothing but a bunch of gangsters,” he said. “Don’t be afraid of them. We grew up in slavery. Now that we have come to the free world, we must bravely speak the truth from the bottom of our hearts!”

Mr. Pei said he admires Falun Gong practitioners’ solidarity and perseverance. He said that Falun Gong is the only group in China that has unwaveringly resisted the persecution. “The evil CCP regime will collapse soon for sure. I hope everyone will see it and reflect upon themselves before God," he said.

Ms. Li came from China six months ago and decided to quit the Communist Youth League and the Young Pioneers during the activities. She said that she had no way to access truthful information when she was in China but sensed that the propaganda she was exposed to there was not true. After she left and found out the truth about the censorship in China and the CCP propaganda about Falun Gong, it dawned on her what had happened.

Ms. Li said it was difficult to survive in China if you refused to do anything that went against your conscience, and it was even harder to support justice, because all of the nation's resources are tightly controlled by the regime.

After realizing that the CCP was the root of all the problems in China, Ms. Li quit all of the communist organizations she had joined without any hesitation.

Mr. Wang, a tourist from China, was present at the student massacre on Tiananmen Square in 1989. He couldn’t help being moved to tears at the pictures of the massacre on the exhibition boards. “The CCP deceives and oppresses people,” he said. “It uses one lie to cover another and eventually commits murder when it gains the upper hand. It has cunningly ganged up with interest groups around the world, but its doom is approaching.” Mr. Wang said he saw hope for China through Falun Gong’s tireless work exposing the CCP.

Patenne Adolci, who took pictures of the exhibition, was saddened to learn of the CCP’s crime of organ harvesting and told a practitioner, “The pandemic isn’t the Chinese people’s fault, it’s caused by the Communist Party!”