Nuremberg, Germany: An Elderly Man Bows to Show His Respect to Practitioners

(Minghui.org) German Falun Gong practitioners gathered at Hallplatz in the city of Nuremberg on July 18, 2020, to mark 21 years of persecution in China and to call for it to end.

Nuremberg is the second-largest city in the German federal state of Bavaria. It was the location of the Legislative Body of Nazi Germany and it became the location where Nazi officials were tried during the Nuremberg trials after World War II. It’s also home to the famous outdoor sculpture the “Way of Human Rights.”

Since the Chinese Communist Party (CCP) began the persecution of Falun Gong in 1999, German practitioners often organize events in Nuremberg to raise awareness of what’s going on in the mainland.

This year, many large yellow banners sporting the words “End the Persecution of Falun Gong,” “Say No to the CCP,” “End State-Sanctioned Live Organ Harvesting,” as well as “Falun Dafa is Good” could be seen. Two booths covered in a sapphire blue cloth held many truth clarification materials. 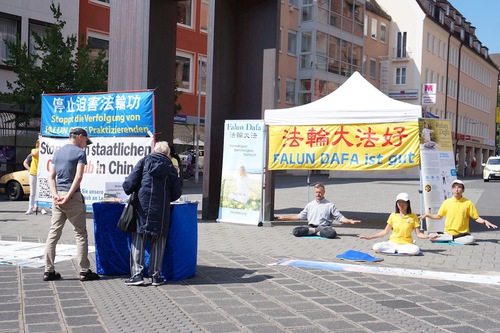 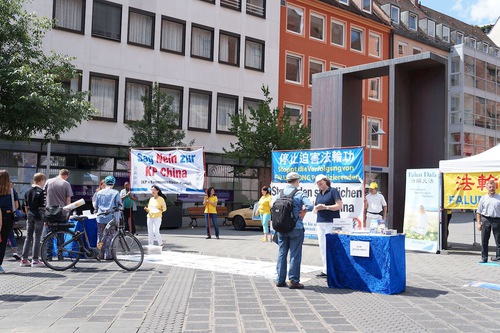 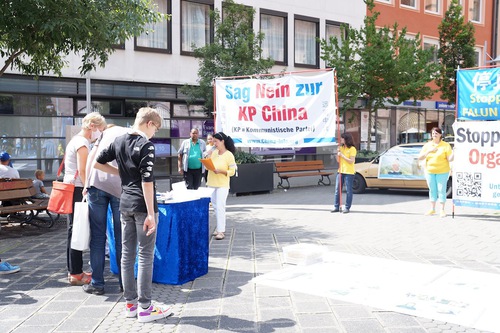 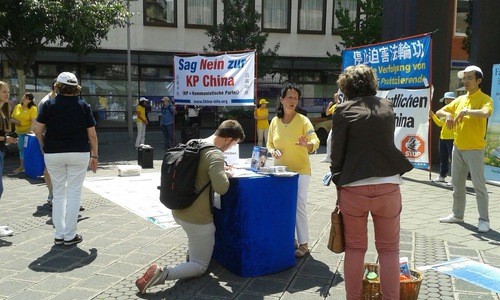 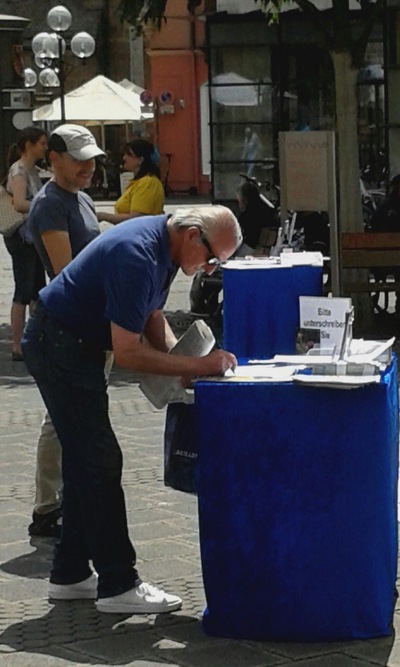 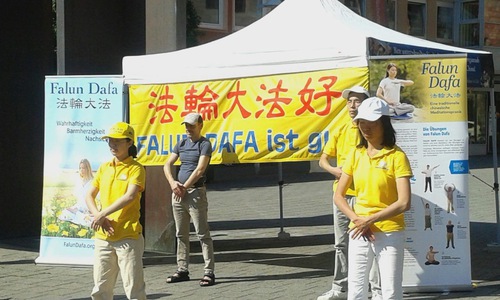 During this event, some Falun Gong practitioners held up banners, demonstrated the exercises, and some stood by the booths, telling people about Falun Gong (also known as Falun Dafa). They talked about the crimes that the CCP has committed during the persecution such as forced organ harvesting.

Due to the coronavirus, in Nuremberg, flyers are not allowed to be distributed but people are allowed to pick up materials on their own. Despite these restrictions, many people took the initiative to approach the booths to learn more; many already knew the truth of the persecution. Quite a few people also signed a petition to express their support.

Elderly Gentleman: “You Have My Respect”

After a local elderly man learned the truth of the persecution, he was very moved by Falun Gong practitioners’ efforts to stop it. He said, “You have my respect!” He then bowed to the practitioners.

He signed the petition and picked up a few more pamphlets and said that he wanted to give copies to his friends at the nursing home where he lives. He waved to the practitioners as he left.

A Turk who has been living-in-exile in Germany said that he heard about the persecution from a Falun Gong practitioner some years ago and did some research on his own. He believes that Falun Gong is rooted in traditional beliefs and has a long history, whereas communism was brought to China just a few decades ago and is something foreign to Chinese.

He picked up a copy of all the pamphlets, including those in different languages. He said he wanted to read them all and also pass them to his colleagues who are foreigners living in Germany. After he chatted with the practitioners for a long time, he asked if he could hold the banner with the words, “Say No to the CCP.” He held the banner until the event concluded.

Alen Orekovic, a Nuremberg resident, signed the petition. He chatted with a practitioner for quite some time. He had thought that China was a prosperous country. However, since the coronavirus, he realized that the Chinese regime silences those who speak the truth. After he learned the truth of the persecution, he said that it was inhuman and he was shocked that live organ harvesting was a reality.

A young couple came over to the booth. The man said that he felt obligated to sign the petition, and his girlfriend had just watched a documentary about the persecution a few days ago.

A young Chinese woman called her friends as soon as she saw the booth. She told them that she saw Falun Gong practitioners meditating in Germany. She also took photos to share with her friends.

The event lasted for only four hours, but many people learned the truth, shared their concerns, and expressed their support for Falun Gong practitioners’ efforts. Many gave the practitioners a thumbs up.

A week ago, on July 11, the practitioners also went to Erlangen, Germany, to clarify the truth on Erlangen Civic Square. Erlangen is a sister city of Nuremberg, where the University of Erlangen-Nuremberg is located. The university has many Chinese students who have been poisoned by the CCP’s propaganda. The practitioners go there often to clarify the truth to the students. 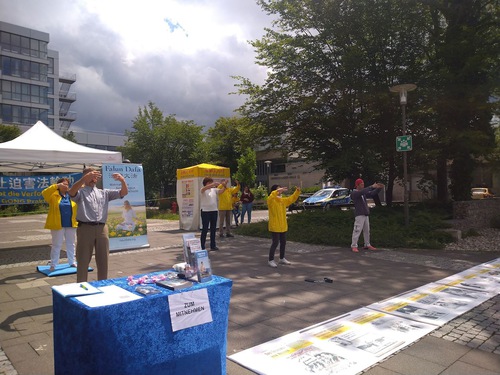 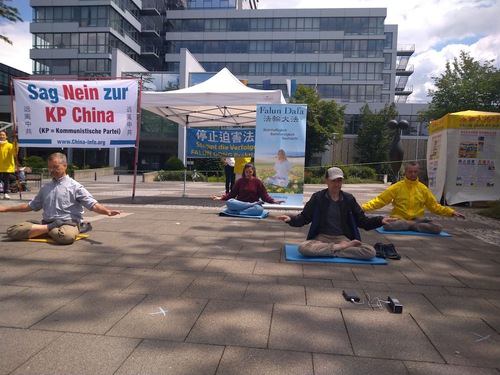 On July 11, 2020, practitioners clarified the truth on Erlange Civic Square.

“Two Falun Gong Practitioners Sent to Mental Hospital, Family Kept in the Dark of Their Situation”