“A Message from You Is a Beacon in the Darkness”

(Minghui.org) Inside China, the Chinese Communist Party (CCP) has been pushing its narrative and misleading people for decades. Regarding Falun Dafa, for example, the defamatory propaganda the Party has churned out about it over the last two decades has turned many Chinese against the spiritual practice and its principles of Truthfulness, Compassion, and Forbearance.

So that people in China can know the truth about Falun Dafa and how the CCP has deceived them, Falun Dafa practitioners in the rest of the world have been contacting people in China via phone calls, text messages, and social media for years. Those who are contacted are usually pleased to learn the facts and appreciate practitioners' efforts.

On August 9, nearly 1,000 Falun Dafa practitioners gathered in Taichung, Taiwan, to study the teachings of Dafa together and discuss their efforts to reach out to people in China. 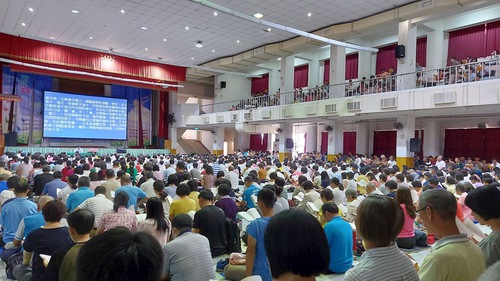 Practitioners study and discuss the teachings of Falun Dafa in Taichung, Taiwan, on August 9, 2020.

Luo Shuying from Taitung often sends multimedia messages to China to let people know how Falun Dafa is being suppressed there in comparison to its wide acceptance in over 100 nations. Despite the CCP's censorship, he said about two thirds of the pictures and short videos go through successfully.

One time, Luo called a number that had received the message. The woman who answered was very thankful. “I have read your message—I know you are a good person and you care about me,” she said. “I want to withdraw from the CCP organizations and please also do the same for my son and daughter.”

Li Shixiu is from Vietnam and her Chinese was very limited. After studying Chinese for six months, however, she decided to call China and tell people about her experiences practicing Falun Dafa. At first, she was very nervous and some people even swore at her. She later adjusted herself and was able to handle the situation better.

One day, she phoned a resident in Beijing who was a CCP member. He seemed impatient, so Li asked, “Can you give me two minutes?”

After the man agreed, Li explained she was calling because the CCP has harmed so many people in all of its political campaigns. She pointed out that the Party's initial cover-up of the coronavirus outbreak in China endangered the entire world. “We Chinese believe ‘Good is rewarded and evil is punished.’ Rejecting the CCP’s brutality and lies will help us return to our traditional values and heaven will once again bless us,” she said.

The man was convinced and asked her to help him quit the CCP using a pseudonym.

Towards a Safe Future

Yu Lifen from Taoyuan, Taiwn, said she is always happy to see people renouncing the CCP and its hate propaganda. She makes time to chat with people in China and answer their questions.

“Some of them want to access uncensored overseas information and others ask about software that circumvents the internet blockade. I've also talked to people who want to practice Falun Dafa,” she said. “My days are filled, but I am very happy.”

One time, a netizen said he’d joined the CCP two years before. “I am really worried about it after reading the information you sent me. What should I do?” he asked. Yu told him that he should avoid being implicated for the regime's crimes by quitting any organizations associated with the Party.

The man agreed and said he would also remember and say, “Falun Dafa is good, Truthfulness-Compassion-Forbearance is good.” He later sent a text message to Yu saying he felt much better.

Another time after she helped someone renounce the CCP organizations, Yu received a message; “My friend, I felt lost in the past and I was not sure where my life was going. Now I am clear about what is right and what is wrong. Thank you so much for bringing me a better future.”

Telling More People about It

Liao Danmiao, who has also been calling people in China for years, said she is often moved by what people tell her. One man said he’d received phone calls and messages before about quitting the CCP. “But I did not pay much attention to them, thinking it was something I joined many years ago when I was young,” the man said. “But seeing you put so much effort into the [social media] groups to help others, I know I have to do something to support this.”

Another netizen said he was shocked to hear that the CCP killed over 80 million people during its political campaigns. “Only a demon would do something like that. As long as the Party exists, China and the entire world will never be at peace,” he said. Not only did he withdraw from the CCP, he also told his family and friends to separate themselves from the Party. “What Falun Dafa and you practitioners do for this world is truly wonderful,” he added.

One person said he was ashamed of what he'd done in the past. Having previously worked for a news media and written many opinion articles, he realized that withdrawing from the CCP was the right thing to do. “Now I understand how vicious the CCP is,” he explained. “I do not want our future generations to continue living under a totalitarian regime. I have to make my voice heard.” His wife and children also severed their ties to the CCP.

Wang Shengzhi from Taichung said he understood the importance of perseverance. He often added people to his contact list. If someone did not read the materials he provided, he would try to explain things from a different angle.

One time, someone gave Wang a list of 10 people who agreed to renounce their memberships in the CCP organizations. Another time, someone asked him to help a few people quit. When Wang thanked him for his help, the man replied, “I have been doing this for 10 years.”

Practitioners Are a Beacon in the Darkness

Reflecting on her efforts through these years, Liao said helping people in China learn the truth motivates her to continue. “When I send information to hundreds of people in the chat groups, it's like distributing materials at a tourist site—many hands reach out to me for the information because they want to know the facts,” she said.

One netizen said the information blockade in China is overwhelming. “Without your help, we are handicapped, both blind and deaf. Thank you for reaching out all these years. For me, you are like a beacon in the darkness,” he wrote.

“Further Understanding of “Changing Our Ways of Thinking””