(Minghui.org) Today's news from China includes incidents of persecution that took place in 13 cities or counties in 8 provinces, where at least 37 practitioners were recently persecuted for their belief. 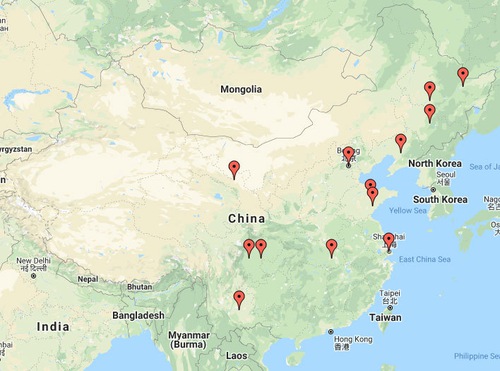 Ms. Li Qian, 45, who lives in the service management center of retired military employees on Danxia Road, was arrested at home in the spring of 2019. Her home was ransacked. It has been over a year since she was handcuffed and taken away. Her current whereabouts are unknown.

Ms. Li’s father was over 90 years old. He looked for her everywhere on crutches. The police told him that she was held in the Kunming City No. 1 Detention Center. He went there three times, the officials admitted that she was there, but they did not allow him to see her.

Ms. Wang Qiuju from Baoshan District was arrested on April 26, 2019. Her case was submitted to the Procuratorate twice but was rejected both times. Her lawyer has notified her family that she will be tried on July 29, 2020.

Under the instruction of the Gaomi City 610 Office and the Domestic Security Division, various police stations in the city arrested practitioners on a large scale around 6:00 a.m. on July 22, 2020. The officers ransacked practitioners’ homes and implicated non-practitioners. They were all kept until midnight without food.

Mr. Qu Hongbo, his wife Ms. Zhu Ping, Ms. Qu Yajing (daughter of Mr. Qu and Ms. Zhu), and three non-practitioner store assistants, were also arrested on the same day. Ms. Qu and three store assistants were released after being held in custody for over 30 hours. The couple’s whereabouts are unknown.

Judge Gao Peng’an and a female court clerk from the Tiexi District Court went again, on the afternoon of July 20, 2020, to Ms. Cui Yufang’s home in Lishan District, and notified her that her trial would be held in August.

Ms. Yi Mingxiang from Huanghua Town was reported to the police for distributing Falun Gong materials on May 25, 2020. She was arrested and taken to a police station, where she was held for two days. She was released after being extorted 10,000 yuan.

Four officers broke into her home and ransacked the place without any paperwork. They confiscated Falun Dafa books and DVDs.

They returned the following day and asked if she was still practiced Falun Gong. They threatened her that if she continued practicing, her grandson’s college admission would be called into question.

Officers from the Lalin Police Station, Nangang District, and residential community personnel went to Ms. Wang Fengru’s home twice in recent days to harass her. They rummaged through her house, forced her to sign documents, and attempted to take her to the police station.

Ms. Wang Yansong, in her 70s, lives in Changyi District. Her son went to a post office to mail Falun Gong truth-clarification printouts for her on the evening of July 14, 2020. He was arrested. Subsequently, the police went to her home, ransacked the place, and confiscated all her Falun Dafa books.

Ms. Wang was arrested and taken to the Tongjianglu Police Station. Both mother and son are being held in the Jilin City Detention Center. Their cases were transferred to the Changyi District Domestic Security Division.

Ms. Li Wenfang, 79, from Shuangliu District, was arrested by officers from the Dongsheng Town Police Station while distributing weekly publications (a special edition on the coronavirus pandemic) and talking to people about Falun Gong on July 5, 2020. The officers confiscated the weekly publications about the pandemic, keepsakes, and paper bills with Falun Gong information printed on them.

Ms. Wang Min was arrested by officers from the Jiefuqiao Police Station when she talked to people about Falun Gong in the downtown area on July 16, 2020. She was directly taken to the Yongxing Detention Center for 10 days of detention.

A group of people broke into Mr. Wang Yukang’s home and ransacked the place at dusk on July 21, 2020. Mr. Wang is in his 80s. His wife Ms. Wei Fengling, in her 70s, was arrested and taken to the police station. She was released around 2 a.m. that night.

Ms. Bai Dongqing from Hedong Sub-district, Acheng District, was reported to the police when distributing a weekly publication about the pandemic on April 13, 2020. She was arrested. Her home was ransacked, and Falun Dafa books and other personal belongings were confiscated. She was given a 10-day detention to be served at home. She was brought home by her family after signing the 10-day detention warrant.

Ms. Li Jia and Ms. Li Yuanying from Qingshan District were reported to the police when talking to people about Falun Gong at the tourist attractions in Lichuan City in July 2020. Their whereabouts are unknown.