France: Residents of Nantes Sign a Petition to End the Persecution of Falun Gong in China

(Minghui.org) Every Sunday since summer arrived in Nantes, France, Falun Gong practitioners have set up a booth on the Place Royale. They demonstrate the exercises on the beautiful pedestrian square and display information about the persecution of Falun Gong that has continued unchecked in China since 1999.

Practitioners were at the Place Royale on Sunday, July 25, 2020. A few of the practitioners demonstrated the sitting mediation exercise, while others passed out fliers and talked to people who stopped by the booth. France has eased many of its coronavirus restrictions. Starting on June 2, the government has allowed restaurants and bars to reopen and lifted a travel ban that had prohibited people from traveling more than 100 km (62 miles).

Many local residents and tourists were happy to see the practitioners at the Place Royale, but were shocked to learn that the Chinese Communist Party forcibly harvests organs from Falun Gong prisoners of conscience to sell to transplant patients.

About 100 people signed the practitioners' petition during the activities on July 25. Their petition was based on the European Parliament's Written Declaration 0048/2016 (WD48), on stopping organ harvesting from prisoners of conscience in China, which was cosigned by more than half of the Parliament's members on July 12, 2016. The petition will be presented to local elected representatives in France, and practitioners will request their support to help end the persecution in China. 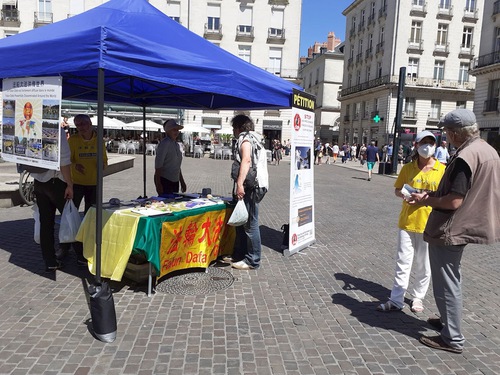 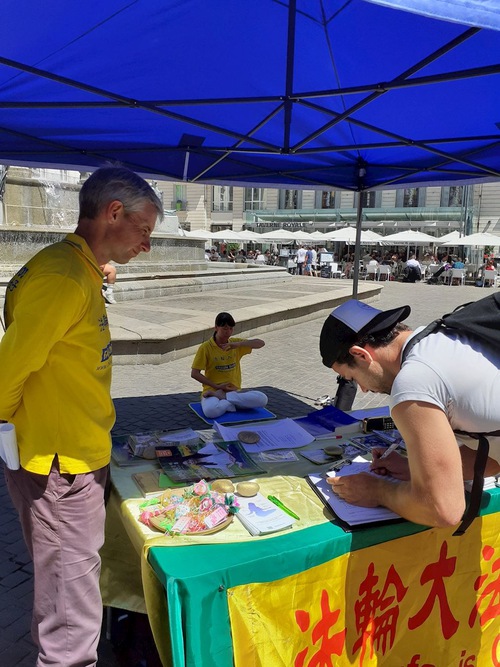 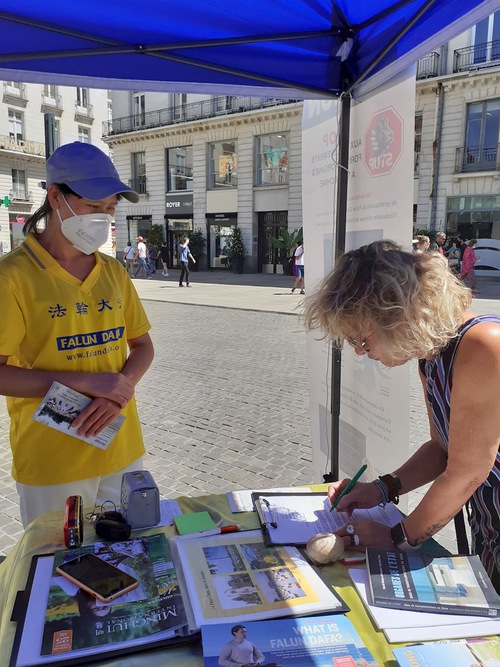 Falun Gong practitioners at the Place Royale in Nantes, France, on July 25, 2020.

Brouard is a student who enjoys practicing meditation. He thought Falun Gong sounded good after learning that it is a traditional spiritual practice from China based on the principles of Truthfulness-Compassion-Forbearance. He also learned about the persecution in China from practitioners at the booth and signed their petition.

A French man said he often traveled to China and had many friends there, but he had never heard of forced organ harvesting and organ trafficking in China. A practitioner introduced him to an investigative report published by Canadians David Kilgour and David Matas in 2006 about the allegations of live organ harvesting in China. The man thanked the practitioner and said he would research the topic some more.

An Indian couple read the display boards and couldn’t believe that people could do such terrible things. “It is so inhuman and I can’t believe the Chinese government is doing it,” the husband said. After chatting with a practitioner, the couple said they would read more on the topic and do some research online.

Practitioners also met some Chinese people who were shocked that human beings could forcibly take other humans' organs. Many of them didn’t want to believe that a genocidal crime of this nature had been happening in their cities.

Many people also expressed interest in learning Falun Gong and said they could feel a peaceful energy while talking to the practitioners.

“28 Falun Gong Practitioners Sentenced for Their Faith in July 2020”