(Minghui.org) Events are being held all over the world to raise awareness of the persecution of Falun Gong that started in China on July 20, 1999.

On July 17-18, 2020, practitioners in Istanbul and Mersin, Turkey, held a peaceful protest in front of the Chinese Consulate, organized a photo exhibition documenting the persecution, and held two candlelight vigils to commemorate fellow practitioners who have died as a result of the persecution.

Practitioners in Istanbul sat before the Istanbul Chinese Consulate for an hour on July 17 and handed out leaflets to passing vehicles. 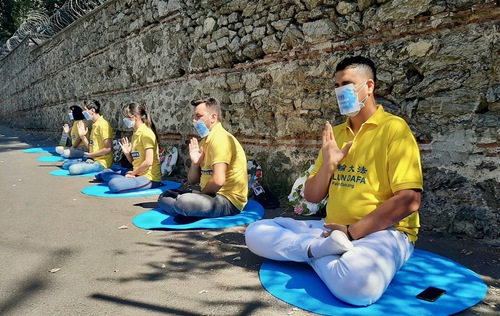 Peaceful protest in front of the Chinese Consulate

One vehicle stopped and the occupants got out. They thought that the practitioners were protesting China over the Uyghur Turks and wanted to express their support. A practitioner told them how the Chinese Communist Party has persecuted Falun Gong for 21 years and even sanctions forced organ harvesting from living practitioners. One of the men was Mehmet Reisoğlu, head of the Tarabya District (the district where the consulate is located) and also president of the Tarabya Sports Club.

He said,“We only knew about the persecution of Uyghur Turks until now.” His friend Mustafa Kurt, a tour guide, took leaflets and asked questions. 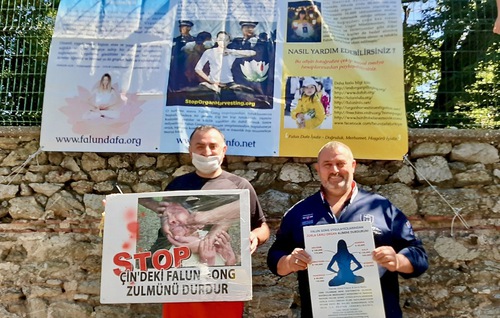 Mehmet Reisoğlu, head of the Tarabya District and the Tarabya Sports Club, and his friend Mustafa Kurt with banners condemning the persecution

On Saturday, July 18, practitioners held an event on the coastline near the Istanbul Chinese Consulate. They did the exercises and clarified the truth to passersby. 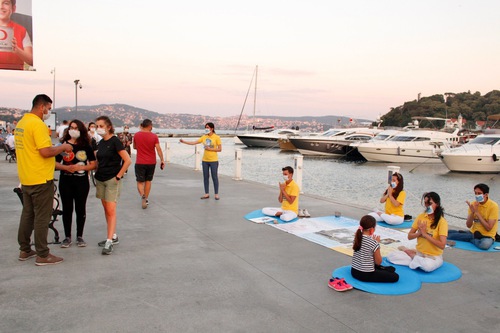 Doing the exercises on Tarabya Beach

Practitioners have started a social media campaign to help end the persecution. People all over Turkey who are interested are encouraged to “Be a Light in the Darkness!” Passersby were invited to participate in the campaign. They had their photographs taken and posted on Instagram and Facebook to raise awareness of the persecution. 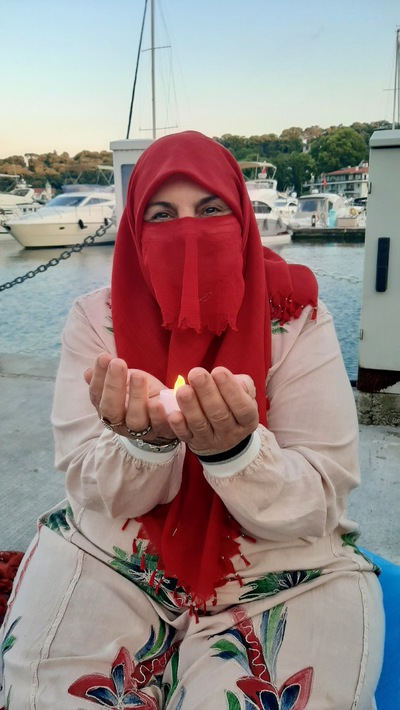 Nurse Gülten supported the “Be a Light in the Darkness” campaign. She shared this photo from her social media account.

Mrs. Gülten said, “The energy in this area is beautiful. It is very clean energy that attracts people—it attracted me. I felt like I was running on the grass while I was doing the exercises.”

Mrs. Gülten’s 8-year-old granddaughter Belis did the fifth exercise, which is a sitting meditation, in the full lotus position, and participated in the candlelight vigil.

During the event, a consular employee watched the practitioners from afar. The police officers who were there to protect the practitioners helped to take a photo. The event ended with a candlelight vigil at 9:30 in the evening. 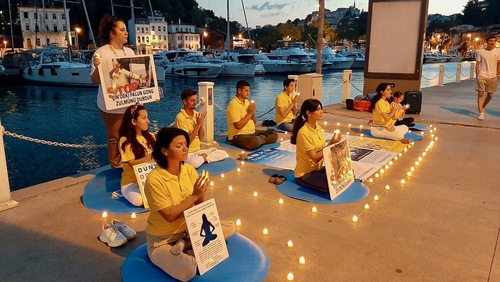 Raising Awareness in Mersin about the Persecution

Practitioners in Mersin held a photo exhibition called “The Journey of Falun Dafa” on Saturday, July 18. They promoted Falun Dafa and raised awareness of the persecution. The exhibition was held in front of the amphitheater on the seafront, the most crowded part of the city. Practitioners also did the exercises and collected signatures to help end the persecution that has been ongoing for 21 years. Many who heard about the persecution signed the petition. 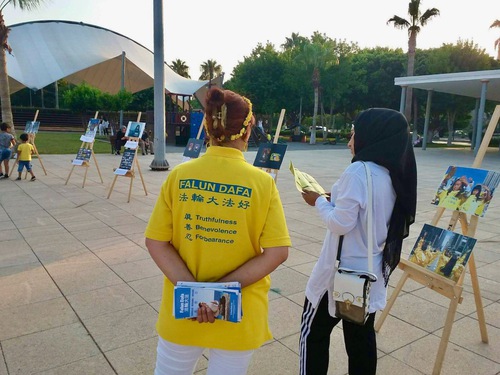 The Journey of Falun Dafa photo exhibition explained how Master Li Hongzhi introduced Falun Dafa to the public in 1992, how the practice became popular in China and was then banned and slandered. The organ harvesting trade was explained in detail. Many people who saw the exhibition were very surprised by the details about the persecution of Falun Dafa in China and signed the petition without hesitation. 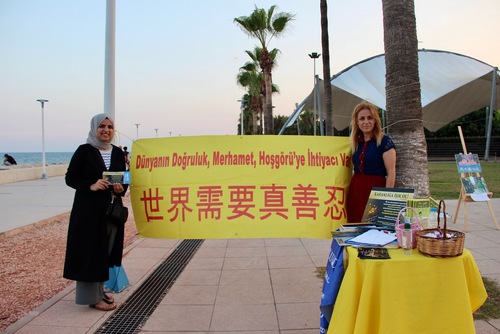 A man and his young daughter visited the exhibition. After learning about the persecution, he said that there is a reason why the virus that permeates the world today emerged from China and that those who do evil will surely be punished one day.

Mr. Emir, a former state worker, said after examining the photographs that he had never heard of any group other than the Uyghur Turks that were being so terribly persecuted. He signed the petition, saying that he was against those responsible for the persecution of the Uyghur Turks and anyone else who was being persecuted for their beliefs.

That evening, practitioners held a candlelight vigil at Marina AVM, the most popular outdoor shopping center in the city. During the vigil, many people were told about the persecution and received a brochure.

“My Understanding of Sickness Karma”